Previewed to the media way back in June, ASUS has been preparing for one of its biggest reveal yet and with Samsung hot off the heels of their folding phones just a few days ago, this one is timed just right. ASUS is bring its own foldable device but its not a Zenfone, but a 17″ foldable laptop under the Zenbook line.

The ASUS Zenbook 17 Fold is a 17.3″ OLED display that folds vertically which makes it one of the largest all-screen laptops to hit the current market. The last device that comes to mind would be the ThinkPad X1 Fold but with ASUS flaunt that larger screen, it does feel more like a more significant product with a similarly extravagant asking price.

Functioning both as a standard 13″ laptop or a folding 17″ tablet, ASUS’ Zenbook 17 Fold is the best of both worlds if you’re the kind of user that wants that kind of experience. It is indeed niche and as you may have guessed, this brings with the same pains as what a folding smartphone has. Regardless, it is natural progression and if nobody’s gonna do it, its not going to evolve.

Read on as I share my hands-on impression and thoughts about the ASUS Zenbook 17 OLED laptop.

When closed, the Zenbook 17 Fold looks more like a literal writing hardcover notebook than anything before it. It features a metallic inner case with the top area featuring the ASUS monogram logo. A folding leather sheet protects the mid-section of the fold.

Folded, its easily an inch or so thick and you cannot fold it flat unless you insert the removable keyboard in the middle, basically sandwiching it fill the space. You can opt not to do so but leave a space in between is just invite trouble.

While we’re looking at the sides, you can see the photo above this one features a USB Type-C port and an audio jack along with a power button and the exhaust vents. On the other side, we only have another set of perforations for intake but no buttons.

Like a normal laptop, the ASUS Zenbook 17 Fold opens up as it should but with a removable keyboard users have the option of using the entire screen as they please.

The removable keyboard is similar to the experience of the ROG Flow Z13’s keyboard cover. It connects wirelessly to the main unit and is decent on a flat surface or on top of the OLED bottom area.

You have to forgive the bad photos that do not highlight the proper colors of the screen. As an OLED screen it is quite decent when it comes to contrast and color reproduction. It is a pre-production model so we’ll hold judgement on the screen and performance in general until a proper review sample comes our way.

Unless you’re really looking for it, when fully open the crease is barely there. Sure in certain angles it will show up but straight from the front its a non-issue. This changes when the screen is folded and due to the angle, many would probably notice this more.

I have to point out that being a touchscreen, you’re bound to push on the screen and there is a certain give to the panel. Not from the hinge, but from the panel itself. I’ve never used a foldable OLED before but I assume this is by its very nature. Its not bad, it may just alarm folks who are used to harder touchscreens that have a certain rigidity to them.

There’s a big question mark that looms on the ASUS Zenbook 17 Fold as who its target audience is and while I do have plenty of ideas on possible uses, these are all addressed already by one solution or another. A product like the Zenbook 17 OLED is definitely a standout sharing display and quick presentations in coffee shops can be made in this approach but then again, ASUS also sells a Zenscreen for this purpose as well. The other is a full-pledged AIO PC with the main laptop fully open and sitting on a table top or counter.

Ultimately, this all boils down to the price. An earlier draft of this article was made back in June with ASUS still not disclosing the price of the Zenbook 17 Fold. Now we get to know that the western market will see this laptop priced at $3500 for their configuration. This changes per region and we’ve yet receive what configuration we’ll get and what price.

Now if you do have the money, much of the experience that bolsters the usability of the Zenbook 17 Fold comes from Windows 11. Thanks Microsoft’s new tablet/touch optimizations, the user experience is much more ideal versus Windows 10. ASUS does not say if there is stylus support, I assume it does but the laptop we were shown did not come with one.

My thoughts on the ASUS Zenbook 17 Fold is that its meant to adjust to your exact needs: a standard laptop that folds up to a somewhat thick 13″ frame which transforms to a larger screen which you can use both horizontally and vertically with removable keyboard and touchpad support. In landscape mode, the large 17″ screen acts as an AIO touchscreen PC and when handheld, is also a very gigantic tablet. All of these in one single device.

In a truly literal sense of the word, the Zenbook 17 Fold is as flexible as any device can get but like anything like it, birth pains always accompany the technology and ASUS must shoulder the brunt of this emerging technology. It took Samsung 3 tries to make their Galaxy Fold and Flip Z as acceptable as they are now and with this first edition of the Zenbook 17 Fold already upon, it leaves a lot to be desired despite addressing the immediate concerns of a foldable screen.

Like many of ASUS’ new concepts, this is a niche product for a rockstar audience and adopters of bleeding edge technology may certainly enjoy the unique bragging rights of opening up a 17″ tablet in a cafe and it will leave people in awe but for productivity and work, there are better options in the market right now. As it is, the thought is enjoyable and ASUS certainly did their best to engineer the Zenbook 17 Fold, but its weighed down by the limitations of this making this technology similar to what we already expect from ASUS. 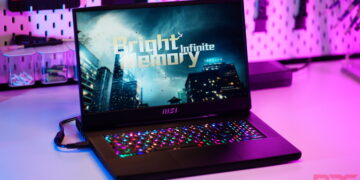 The History of Faucet Bitcoin