by Grant Soriano
in Reviews, Monitor
Reading Time: 6 mins read
A A
3

SpecterPro’s presence in the market has nothing been but destructive due to its very aggressive pricing. The most notable monitor in their lineup is the G255SL, which we reviewed and gained a positive mark. The features namely the 144hz panel, an above average adobe RGB rating, and VESA compatibility make the price of Php 9,700 absolutely worth it as it beats other 24″ 144Hz in the market.

With the successful entry and penetration in the market, SpecterPro has then released newer panels to fill the 24 and 27″ TN and Curved market while maintaining its competitive pricing. On our plate is the XT27NS 27″ Curved 144Hz 1080p gaming monitor. The XT27NS is a curved variant of the X27, with it having VA panel instead of the X27’s TN display. Let’s take a look.

The Packaging is fairly standard and not much has improved since the first release of their 144Hz G255SL monitor. To their credit, at least it’s not the same box that’s just slapped with a sticker.

For its thin packaging, you’ll definitely be concerned on how it’s packed considering the screen’s curved nature. Compared to other brands with their curved monitor packaging, Specter’s approach might be worrisome. Good enough that our unit arrived in pristine condition with no scratches or panel defects.

Moving to the contents, you can find their usual 2-piece stand, manuals, a very slim power adapter, an HDMI cable, a 90degree DisplayPort cable and what it seems to be a cable management accessory. More on that later.

The Monitor sports HDMI, Dual link DVI-I and DisplayPort for its inputs. It also has a S/PDIF port and a VESA mount which is surprising to see for a value oriented monitor.

The stand is fairly easy to install thank to the monitor having an easy install feature, unlike its brother, the G255SL. You’ll still need screws to attach the neck and the V-stand. If you are planning to use dual monitors then you can even try some reliable monitor stands for desks to hold both the screens.

The SpecterPro XT27NS also includes an accessory for cable routing that also serves as an aesthetic red accent for the monitor.

The SpecterPro XT27NS tilts from 5° to 15°. The stand offers no pivot or height adjustment but the VESA mount compatibility compensates, that is, if you are willing to spend for a monitor arm.

The OSD Menu of the SpecterPro XT27NS is just the same with what you would see on the G255SL. It’s very simple to navigate with thanks to the button placement having legends and the simplicity of the OSD.

Color Space is important for monitors as it displays the range of colors it can produce(which is the triangle) out of the millions of colors that our eye can see which is measured through the sRGB coverage. The 98% sRGB rating of the SpecterPro XT27NS is amazing considering that it sports a VA panel and it has a 144Hz display. Moving to its AdobeRGB rating, the SpecterPro surprisingly has an above average coverage with 73% beating other curved monitors as well as beating most TN-panel gaming monitors.

Color and Screen Uniformity tells us how the monitor is able to keep its colors and light uniform throughout the display. The DeltaE is a value that notes the total color difference from 3 parameters(green/red, blue/yellow and light/dark) that provide a quantitative color measure. The closer the values are to 0 means better. It’s a good thing that there’s no region that exceeded a DeltaE value of 3.0 meaning there’s no noticeable color shifting. But the three of the four edges have higher values meaning they will still be lighter or darker, depending on the scene. Overall, you’ll still enjoy the viewing experience with this monitor

Let’s break it down:

Performance. Yet again, SpecterPro delivered an outstanding value gaming monitor. The Panel’s 144Hz refresh rate plus its amazing color reproduction for a Curved VA panel make it a no-brainer if you are on a budget and you don’t care about the monitor’s lack of stand flexibility. The 1080p resolution slapped on a 27″ screen might not be the cup-of-tea for some as it has a smaller PPI, but its 1800R curvature still makes an immersive gaming experience.

Build Quality.  To maintain its competitive price, SpecterPro had to compromise on some of the monitor’s aspects and as it turns out, most can be found on its build quality. Out of the box, it does feel like a cheap monitor, especially if you take a look at the back panel. The plastic is not that rigid on what you would find on a 144hz gaming monitor, but then again, they still managed to include a full metal stand that’s capable of fully supporting the monitor. Outside of its packaging, its overall construction looks like the panel can be easily damaged if mishandled by the user, which is not covered under SpecterPro’s warranty policy.

Functionality. The 27″ footprint of the monitor might be too large for some depending on their setup. With that said, users who do not have an optimal desk height might be in trouble as the monitor only supports tilt and it has no height adjustment feature. The OSD setting is easy to navigate and it does not have any misplaced setting options.

Bundle. The versatility of display and audio parts as well as the included cables, namely the 90-degree DisplayPort cable are an icing on-top considering what you’re paying for and what you’ll be getting panel-wise. Despite the monitor’s build quality, you are still getting your money’s worth as there are more add-ons than compromises.

Value. Priced at Php 12,000, this monitor definitely is a no brainer for users looking for a sub 15k curved 144Hz monitor. Panel and price wise, it is definitely one of the best you could get in this class. Do note that you might shell out around Php 2k for a decent monitor arm to compensate for the tilt-only stand.

The XT27NS’ panel is its bread and butter where most of your money is spent on. With only a Php 2,000 bump from the SpecterPro XT24NS and a Php 2,300 differenceo on the G255SL, the XT27NS’ price of Php 12,000 is still lower compared to existing 24″ 144hz panels, both flat TN and curved VA ones. Playing on a curved screen really brings an immersive and comfortable gaming experience as I enjoyed playing PUBG and other shooters. The 178degree angle and 1800R curvature coupled with a bezel-less display helps with sighting enemies because you are able to notice enemies and other in-game elements, such as the HUD, using your peripheral vision without taking your focus on the center of the screen. On the other-hand, watching movies or doing content creation stuff on the XT27NS might not be as enjoyable as your gaming experience because it’s curved panel may disturb your perception what you’re viewing.

Overall, the price of the XT27NS and the features it brings to the table makes it a great choice for gamers on a budget who wants something new aside from the traditional flat displays. Having optimal viewing angle a must for this monitor if you want the best possible viewing experience. With that said, the stand only supports tilting and its the monitor’s lowest point. Luckily, buying a monitor arm for an additional ~2k pesos immediately solves the problem thanks to its VESA mount support. This shouldn’t bee a problem for gamers who have a low-height desk and an gaming chair to provide an ergonomic viewing angle.

SpecterPro backs the XT27NS with a 1-year warranty. And we give it our Performance Award! 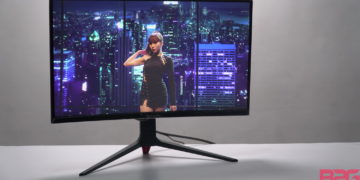 SpecterPro started with a value oriented panels beating most monitors in a price-performance ratio. As their market grows, SpecterPro continues...

5 Reasons Why Video Games Is Not A Waste Of Time