Let me start off with the most obvious question which is “isn’t Huawei banned?”. An echoing concern amongst our audience in our unboxing video is the evident fear of the US lockout but as you can see, Huawei is releasing their latest NOVA 5T and as previously stated, any and all launched products will continue to be supported by Google. With that out of the way, let’s get started with our review of the Huawei NOVA 5T.

October 15, 2019: We’re giving a Huawei Nova 5T! Get the chance to win your own Huawei Nova 5T smartphone. Check out the mechanics at the last page of this review on how to enter!

The most resounding feature of the Huawei NOVA 5T is that it features the same Kirin 980 processor as the P30 and P30 Pro. Yes, those top-end phones share the same engine as the NOVA 5T. That means the NOVA 5T is promising flagship performance at a surprisingly good offer and that’s the main take here: at only Php18,990, the Huawei NOVA 5T that is easily less than half the price of the P30 Pro. In a market where more people want to game on their smartphones while still make it last throughout the day in a single charge, that’s a challenging proposition. Is the Huawei NOVA 5T up to the task? Read on.

The Huawei NOVA 5T comes packaged in a simple white box. The package contains the phone, an AC Fast Charger, USB Type-C cable, a sim tray pusher and some manuals.

Right off the bat, Huawei is telling you the NOVA 5T does not have an earphone jack. Included, is a USB Type-C to 3.5mm converter cable priced at Php300 but you get it here for free. Huawei P30 Pro owners such as myself feels happy and sad at the same time.

Our sample did not come with a case but the screen has a film protector attached out of the box. Our sample is the Black version. The Huawei NOVA 5T comes in 3 colors: Black, Crush Blue and Midsummer Purple.

The NOVA 5T’s other, more vibrant colors or Crush Blue and Midsummer purple. Huawei touts these phones for having holographic effect but the Blue and Purple options have the most pronounced effects with the blue one having a metallic sheen to it and the purple option sporting a unique text pattern. The purple one is easily my choice if it was me.

The black version is more traditional but still sports that elegant, black sheen which is a nice callback to the early days of smartphones.

The Huawei NOVA 5T features a smooth, metallic body with metal corners that feel great in the hand. The edges are rounded and just feels natural to hold. At 174grams its also a lightweight phone despite featuring a larger battery.

The Huawei NOVA 5t is 7.8mm thick and if it wasn’t for the camera bulge its probably a bit thinner. The P30 Pro is 8.41mm thick so just a hair different.

On the side we have the volume rocker and power button. The power button has an integrated fingerprint scanner and is quite fast. As a hardware scanner, its is significantly faster than the P30 Pro’s onscreen optical scanner. Its a bit recessed and I think Huawei was aiming to lessen usage of the actual button as the fingerprint alone is so fast, it’s actually the better option of waking up the phone rather than a button press.

At the bottom, we have the USB Type-C  port. Great to see a more modern port here rather than an older microUSB port. The downfiring speakers are also on the bottom.

The Huawei NOVA 5T supports dual nano SIM card. Both trays are for SIM cards as the phone does not support expandable storage so no, it won’t take in a microSD card.

The cameras of the Huawei NOVA 5T are arranged in a vertical fashion similar to the P30 line. This phone sports quad camera at the rear which we’ll talk about later. On paper, Huawei is touting a  48MP rear cam with f/1.8 aperture and 28mm at its widest is the main cam, a 16-megapixel f2.2 ulta-wide, a 2-megapixel super macro lens and a 2-megapixel Time-of-Flight which is used for creating bokeh for portraits are that blurry background effect.

Moving over to the front, we start off with the camera: a 32-megapixel f2.0 front facing camera.  The camera is a punch-hole design and goes through the LCD screen. The hole is offset to the furthermost edge so it really doesn’t take up a lot of screen space and doesn’t distract a lot with full screen applications.

The NOVA 5T features a 6.26-inch IPS LCD screen with an FHD+ resolution. Its strikingly different from OLED on the P30 Pro but if you’re coming at this range, this is a fair offering.  The slim bezels really highlight a great edge-to-edge screen.

The phone features a 3750mAh battery. Its not as high as the Mate’s or P30 Pro’s but its still a good step up for midrange phones. I would’ve loved to seen a full rounded 4000 though just to really seal the deal. Despite that, the phone supports SuperCharger at 22.5W, this is still a relatively fast charge so if you did go low, a Huawei SuperCharge powerbank would do well to help you out if you need more juice.

The phone supports NFC amongst other things for its features but leaves out wireless charging.

Similar to benchmarks, we really don’t put much stock in the intricacies of mobile phone photography. As good as cameras gets, there’s always a right configuration for the right show and you can’t get all of those. But I do believe that the best camera is always the one with you and the Huawei NOVA 5T tries to cover as much base as possible with a 48MP main cam, a wide cam and a macro cam.

Full disclosure, I am using a Huawei P30 Pro coming into this review so my expectations were raised a little but and I’d hate to be brutally honest here, but the camera really comes up short for me in terms of detail. These are indeed usable images, and very practical for social media use but again, don’t expect anything special here. Its a usable camera and offers fun features and is actually decent for non-pixel peepers that just want something quick to take memories of.

The Huawei NOVA 5T features a 3750mAh battery. Its decently larger than most midrange phones from previous gens but a bit smaller than most modern flagships. Billed as a flagship, once would expect something relatively similar. Perhaps a 4000mAh battery. Whatever the reason, we would loved something larger in terms battery. Actual usage does satisfy though with a full charge lasting a healthy day with plenty to spare. Our normal day of calls, text, browsing and games saw us at 40% at around evening with a full charge in the morning.

Like some of the newest phones from Huawei, the phone features extended power management features which is nice to have as well as screen time monitoring where you can see your phone usage and which app you use the most. Very good lifestyle decision making tool. 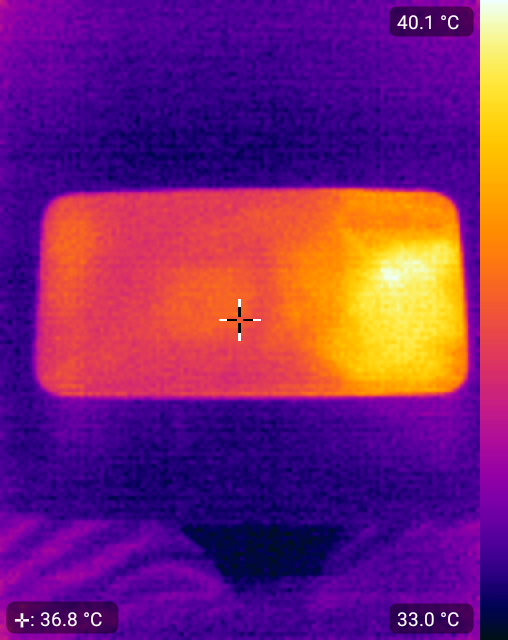 For reference, here’s a thermal image of the Huawei NOVA 5T after a 3-game run in Mobile Legends. Room temp is 30*C. We’re seeing a 40*C peak heatspot near the processor area but the rest of the phone sits around the cooler 35*C mark which is fairly body temperature. It does get warm but takes quite a while.

We specialize in testing performance here in B2G and for the most part, benchmarks right now show us if there is something wrong more than anything else. Still, its hard to get a grip on how and what benefits with get from benchmarks numbers from mobile chipsets. Still, games are one of the main drivers for the smartphone’s performance growth. We’ve test the Huawei NOVA 5T in some of the more popular games out right now.

Everything just works in terms of games here. If there’s an option to set every graphical detail to max, we can set it and the phone continues to deliver smooth frame rates with no problems. The Huawei NOVA 5T is an excellent gaming phone save maybe for the speaker placement. The bottom speaker gets blocked when in landscape mode in muffles the audio. So gamers may be fore to grip it differently.

Huawei isn’t specifically targeting a niche with this phone but the mid-market slant is evident and their insistence on pushing for the younger market may be rewarding for the NOVA 5T. With flagship phones evidently more premium these days, the appeal of having it in reach with the NOVA 5T may just be enough to coax people who want a powerful device that can handle pretty much anything you can throw at it and still come out strong.

Huawei addresses many of the most common wants in this segment: a powerful processor, a great camera, decent battery life and a great feel. The Huawei NOVA 5T is very hard to dismiss and while it does have its faults, we’re mostly nitpicking by that point. At Php18,990, competition is short if we’re pitting value and performance and its very hard to deny that at this price point, the Huawei NOVA 5T has excellent value offering.

For anyone looking to step up their budget from Php15k and is looking for a considerable upgrade from current mid-market offerings, the Huawei NOVA 5T is an excellent choice with its great balance of value and performance.

The Huawei NOVA 5T is now available for sale in the Philippines for Php18,990. You can buy from official Huawei partners at the link below:

THIS EVENT HAS CONCLUDED.

We’ve teamed up with Huawei Philippines to bring give one of our readers the chance to win a brand, new Huawei Nova 5T smartphone. Starting October 15, 2019 until October 22, 2019, earn raffle tickets by liking Back2Gaming, leaving a comment or by sharing this review to enter the raffle.

For bug reports and issues with the apps, leave a comment with details about the issue and we’ll fix it ASAP.