Computer peripherals posses one of the largest markets in the industry and one of the sought out brand is ORICO Technologies Co.,Ltd. If you haven’t heard about them yet, ORICO is a global company based in China which mainly engaged in HIGH-END market of USB Hub, USB charger, HDD docking/enclosure, and NAS enclosure. As a matter of fact, ORICO currently holds 63% of the share of supplies in China alone.

In the Philippines, ORICO got their popularity from offering a wide range of HDD enclosures. Today, this company is considered to be one of the top brands when it comes to quality computer peripherals. Excluding keyboards and mouse since they don’t offer those.

So without further ado, here’s a closer look at one of their top of the line Bluetooth receiver, the ORICO BTS01 Desktop Bluetooth Receiver.

The packaging box used for the product is made of corrugated fiberboard. It’s a simple packaging overall but eco-friendly. It has one sticker at the top and some text at the bottom. The sticker highlights the features of the receiver, brand name, and an image of the Bluetooth receiver.

The back of the packaging box highlights information about the brand in two different languages, product certification, country of origin, and serial number.

Opening the box was fairly easy. Inside, space is divided into compartments. Some are designed to hold the product in place while the others contain the included accessories.

Taking out the Bluetooth receiver reveals its small form factor. It has a black plastic casing made of ABS material. One button can be found at the top while the I/O can be located on the sides.

Last but not least, the package comes with a few accessories and those are 1x 3.5mm male to 3.5mm male audio cable, 1x USB Type-B Micro for charging, 1x user manual, and 1x appreciation card.

The ORICO BTS01 Desktop Bluetooth Receiver comes in a small trapezium form factor. It’s so small that it only measures about 6 by 6 by 2.8 centimetres. It’s available in black colour only and the case is hard plastic, typically made from ABS material.

The top part of the receiver features a single button design that has a circular metallic brush accent around it. The button itself is also an LED indicator as well as the little hole below it.

There’s nothing much else to mention about the top part while the bottom side only features 4 rubber feet. The rubberized feet are there to prevent the device from moving or sliding when in use.

Looking at each side of the receiver, one side features the brand logo, the second one has the female USB Type-Micro B port for charging, and the other side has the audio I/O for hooking up your speakers. The fourth side doesn’t feature anything.

Now for this section, we are going to conduct various test cases to measure or get a good grasp of the receiver’s overall performance. To see where or what it is good at and to know about its flaws.

Pairing up the ORICO BTS01 with a smartphone was fairly easy. Simply turn on the receiver by press holding the power button for 3 seconds. After that, it will be visible for Bluetooth pairing.

For this test, we hooked up the receiver with a standard 3.5mm computer speakers. It also supports RCA Composite audio connection for RCA type speakers.

The quality of the connection is excellent when playing some videos or music. No stability issues or skipping sound. There is no quality lost all throughout the test.

Since the BTS01 is a wireless audio receiver through the Bluetooth spectrum, it can then also be connected to a car’s audio. To do so, simply use the included 3.5mm male to 3.5mm male audio cable to connect the receiver to the 3.5mm audio port of your car stereo.

For desktop connection, your computer must have Bluetooth connectivity. For this case, we used the ORICO BTA-408 Mini USB Bluetooth 4.0 Adaptor to hook up our desktop with Bluetooth connection. Pairing was fairly easy and it was quite stable all throughout. However, we did encounter some issues. There are times that the music skips for some reason.

Although we are strongly convinced that there are no defects or issues with the connectivity or devices. We suspect that the issue is coming from the Windows system itself. Since the audio quality is decent when connected to other devices but the skipping issue is very persistent with the desktop.

For the laptop connection, it was also easy. No issues found or encountered. Everything was smooth and the pairing was easy.

According to specs, the receiver can handle a stable connection of up to 10 metres. However, this is not the case in a real-world scenario. Bluetooth, as we know it, is actually a wireless radio connection that uses 2.4Ghz frequency. Therefore, any devices that use the same range of frequency can easily cause interruption resulting in shorter and poorer connection quality.

So in our test, we connected the receiver with our smartphone. While connected, we played a couple of music to listen to. We then slowly moved both devices away from each other to see at what distance it will retain its stable connection with no interference issues.

For this test, there are multiple devices present to cause some interference for both devices and those are a Wi-Fi Router, a Microwave Oven, a remote control TV and AC, and lastly, another Bluetooth connection from different devices. This is then to replicate a real-world scenario.

At most, we had no interference issues at 6 metres. At 6.1 metres and so on, the connection becomes unstable and the audio started to skip and lose connection.

The Bluetooth wireless connection is actually not designed to penetrate an object between the two connected devices. For example, a concrete wall. In our test, we were still able to connect and play decently despite having a 4-inch thick concrete wall between our smartphone and the receiver while at a distance of 5 metres away from each other.

From 0%, the power draw of the receiver peaks at 0.2A and has an average power draw of 0.16A. It then goes lower as the battery reaches its maximum capacity.

The BTS01 Bluetooth receiver is rated to last about 7 hours of continuous use with a 100% battery charge. In our case, we used the received after fully charging it. We started at around 5 PM and the receiver turned itself off at around 2:56 AM. That’s roughly around 9 hours of continuous use. That’s pretty amazing for something that’s rated to last lower than the actual experience of it.

With the advancement of the technology around us today, it’s a bit hard and difficult to find a reason to purchase a Bluetooth receiver for whatever reason. However, a demand for a device that can turn any wired speakers or a car’s stereo to a Bluetooth enabled device still exists on the market today. So whether you simply want to make your beloved wired speakers wirelessly or simply looking for a way to make your car stereo wireless, then the ORICO BTS01 Bluetooth Receiver is definitely a great solution for that. It is also a cheap way, may not be the cheapest, to get the job done.

For as low as USD 17 or PHP900, it offers a Bluetooth connection compatibility across the board. So you have nothing to worry about no matter what your device’s Bluetooth version is. It has a decent performance overall and the interference issues that we encountered during our test should not be a concern. The only time that the issues will be a concern is if this device will be used with a distance of more than our stable distance result, which is 6 metres. 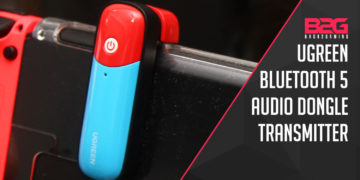 Nintendo is one of the greatest companies to ever exist for us gamers. Their creation and innovation for gaming have...