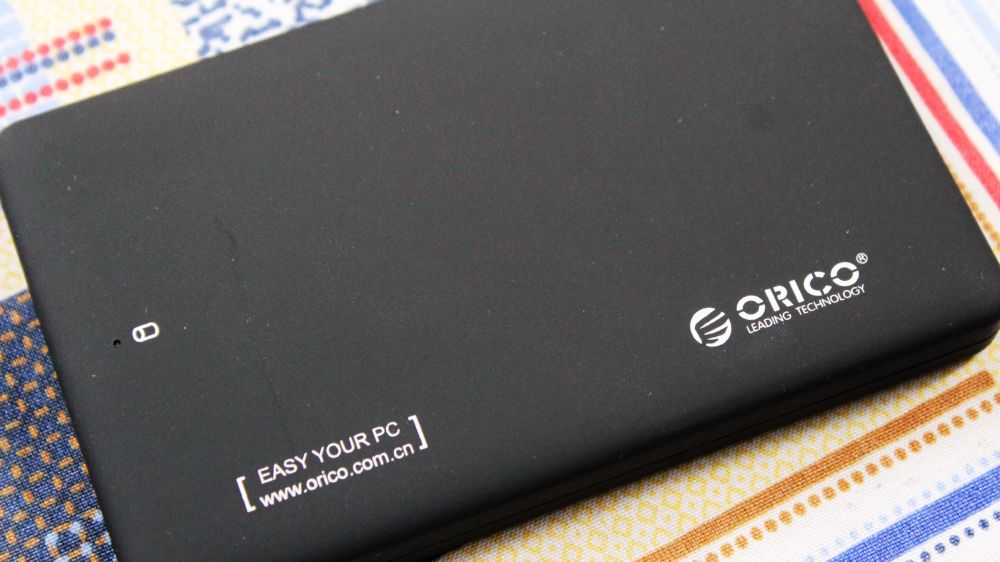 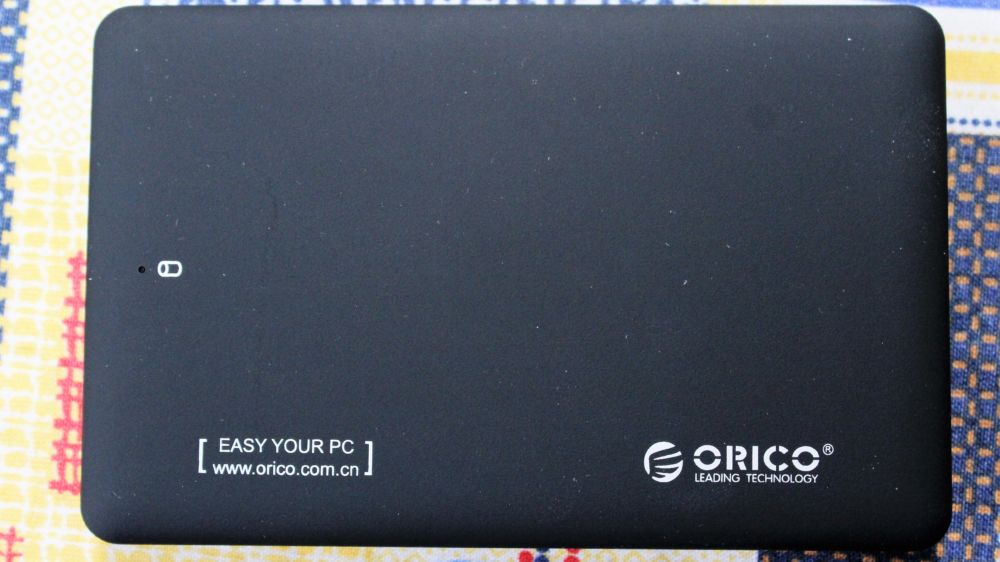 The quality build and feel of the Orico 2599US3 Hard Disk Drive Enclosure are decent and durable in a way. When held, you will first notice of the matte finish design of this enclosure. 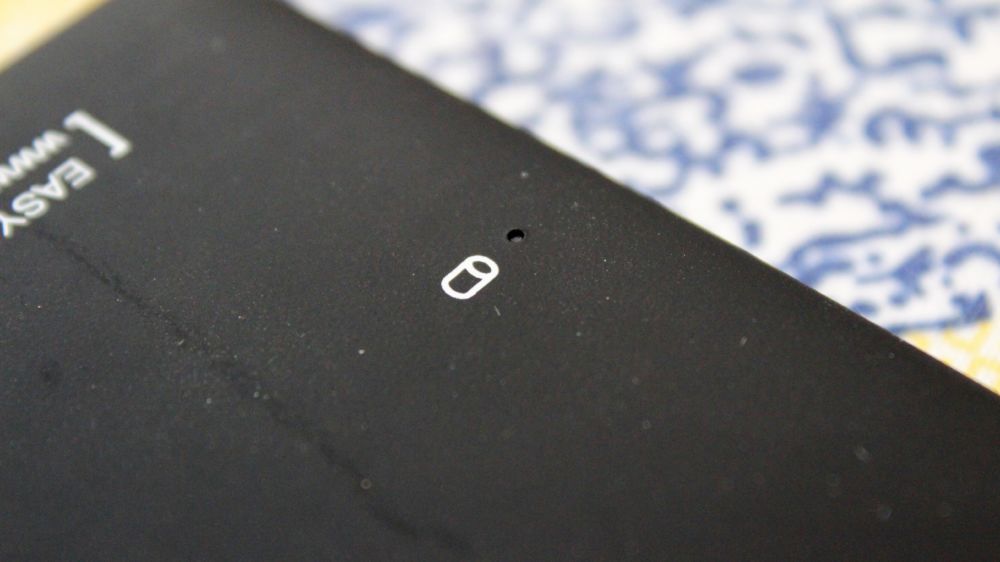 Also, the front side has the LED indicator that lights up when transferring files. Its colour is deep purple when lit. 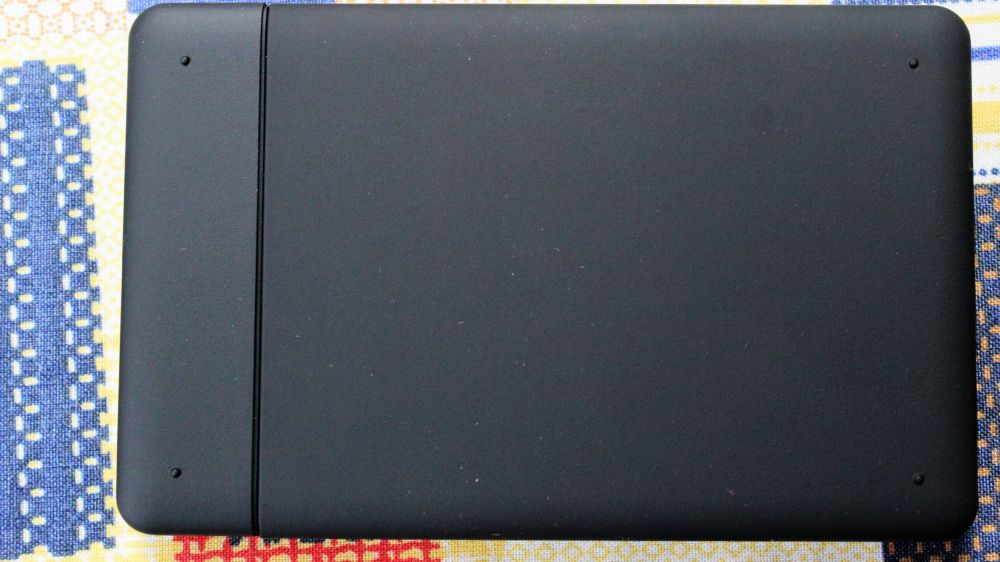 The back side has the removable cover. It also has a matte finish design. This is where you will place your 2.5″ drives like laptop hard drives or solid state drives. 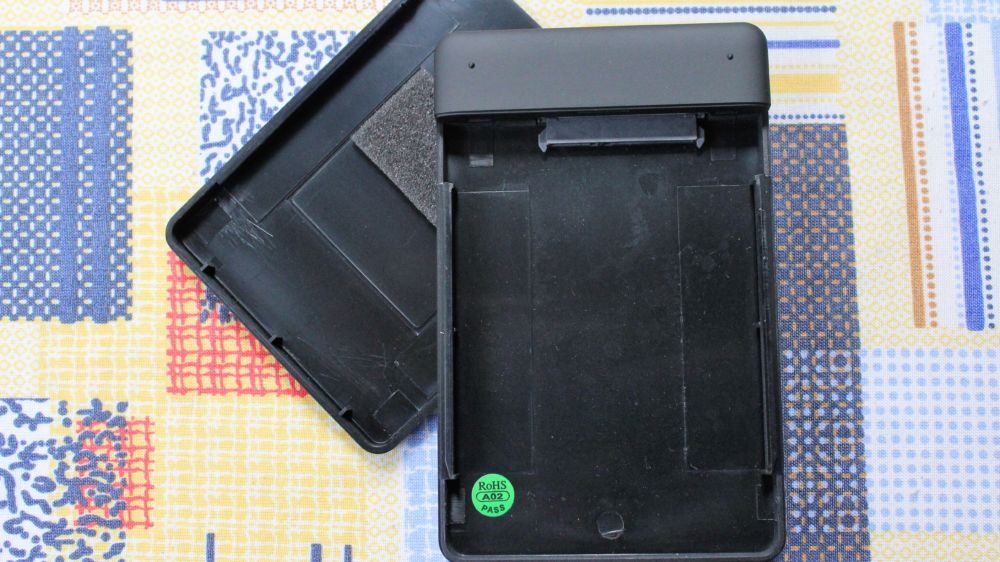 This is what it looks like after removing the cover. A foam is attached to the inner part of the cover to provide protection for your drives when inserted. It also acts as a holder to prevent any movements when your drives are installed. 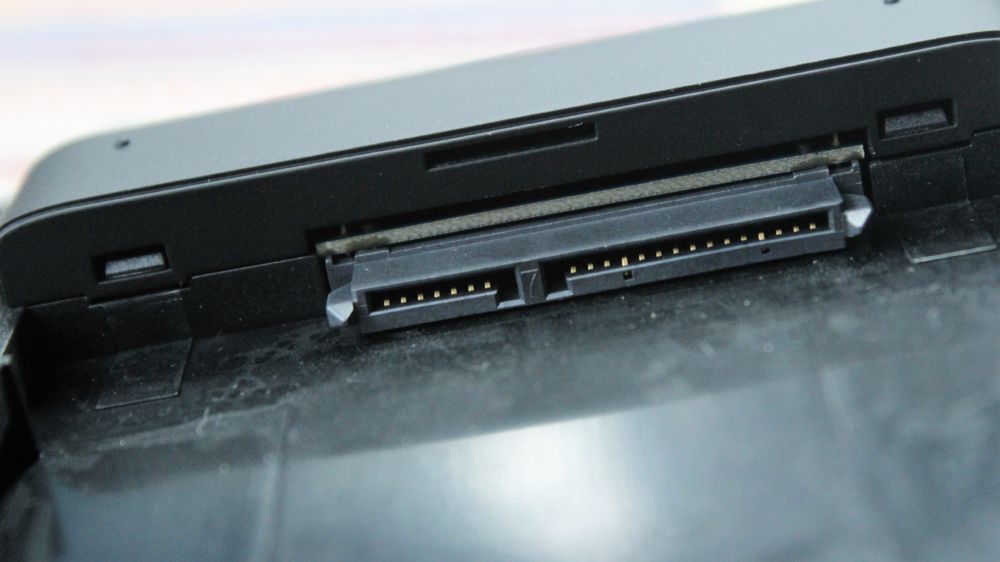 The Orico 2599US3 HDD Enclosure supports all types of SATA drives and those are SATA 1, 2, and 3. So if you have an old laptop collecting dust, you can take out the hard drive of that laptop and use it as your own external hard drive with the use of this HDD enclosure.

It’s quite dusty inside. 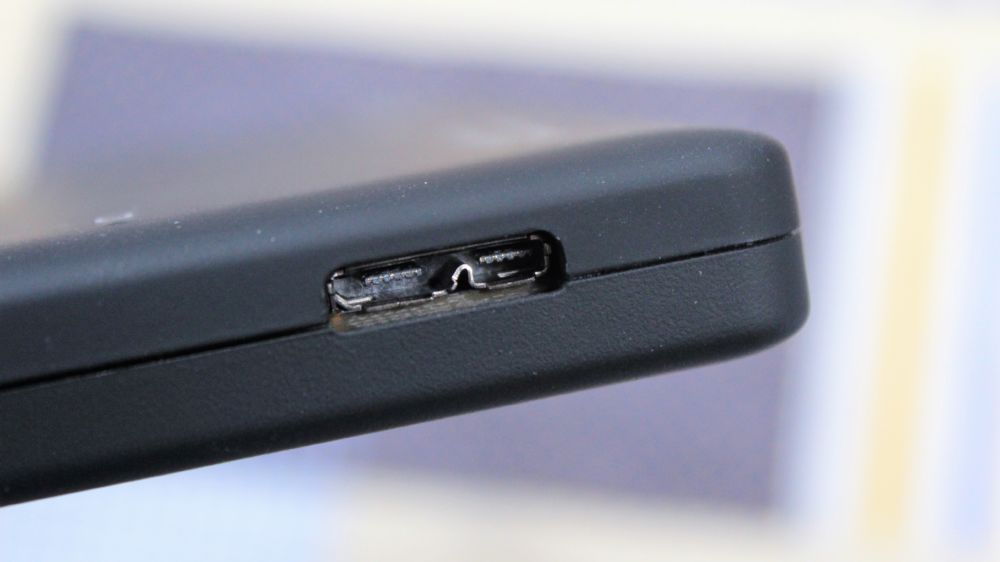 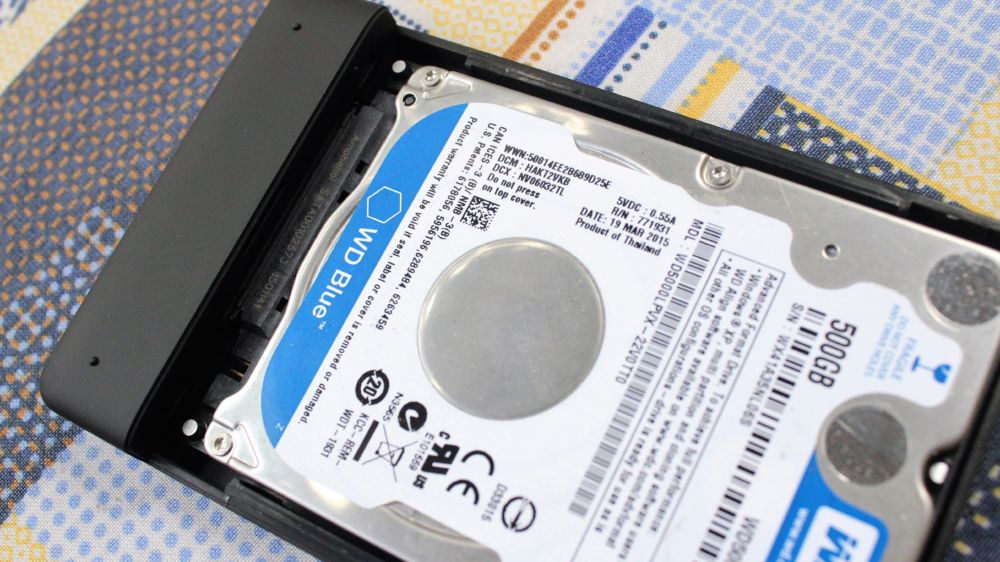 Here’s what it looks like after installing a 2.5″ hard drive from Western Digital. 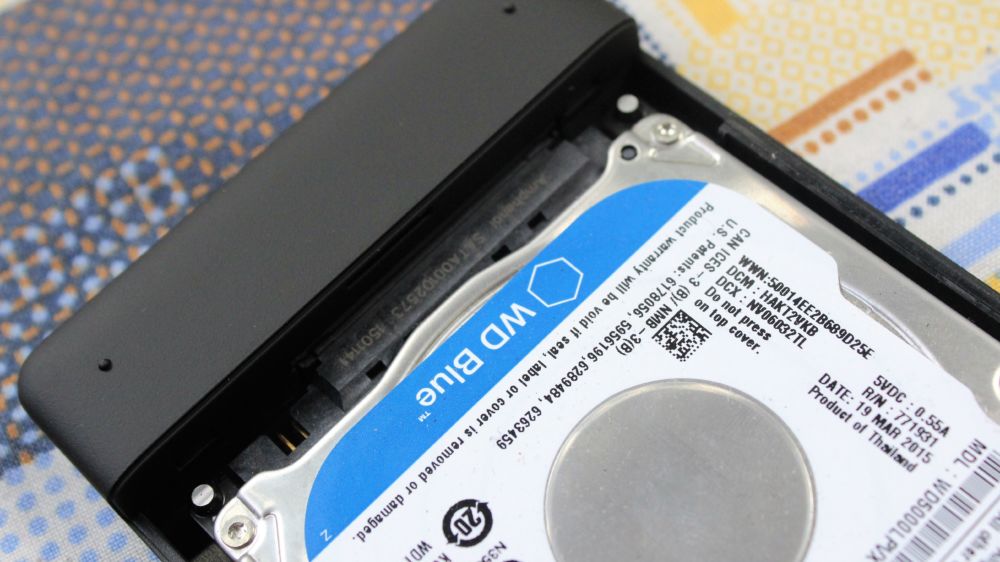 A closer look reveals that the drive will not be screwed in place and it does not even have locks. The back cover is the only thing that will hold the hard drive in place. So you have to be careful when using this hdd enclosure, a 1-foot drop can be fatal since it does not support or feature any shock proofing. 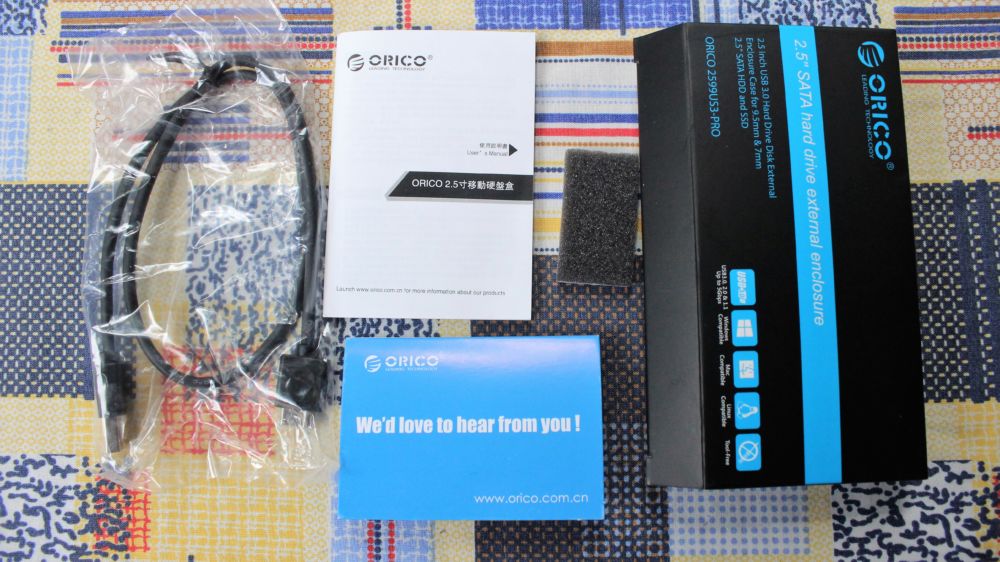 The Orico 2599US3 Hard Disk Drive enclosure comes with one manual, one warranty card, one USB 3.0 cable, and an extra foam cushioning. 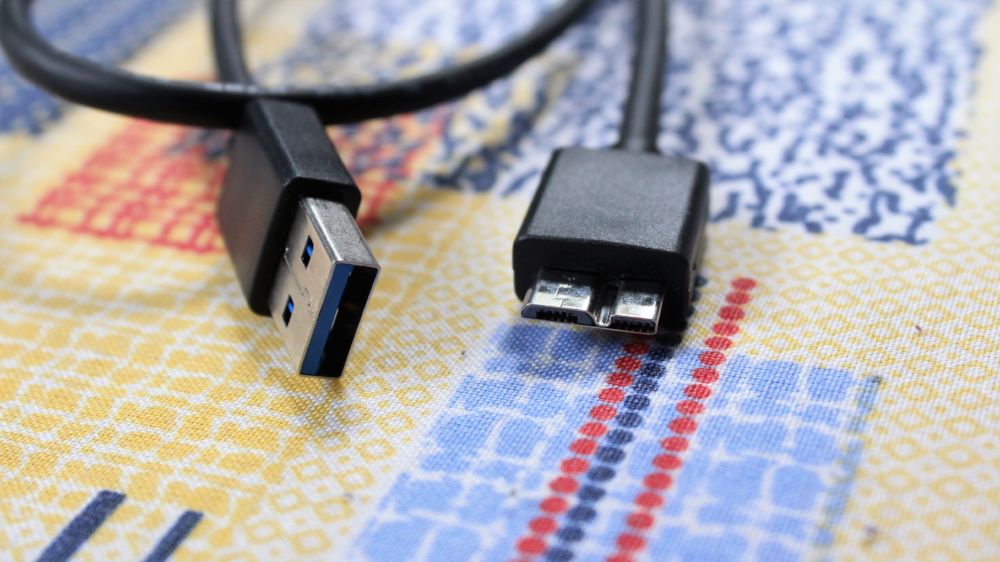 Since this is an HDD enclosure, the actual data transfer speed rate will depend on the performance rating of the drive that you will install. Surely, if you install an SSD as the drive, it will be limited to the 5Gbps because that is the capability of the USB3.0 interface. However, you don’t have to worry about performance degradation because consumer grade mechanical hard drives are still not fast enough to even saturate USB 3.0 speed of 5Gbps. 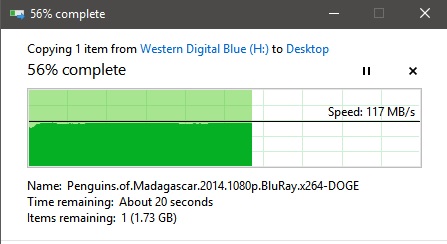 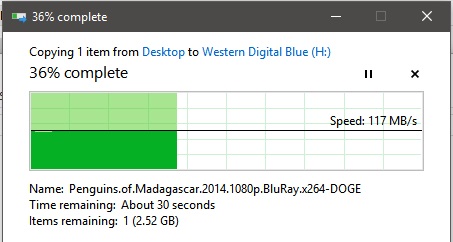 For this performance test, we moved a 4GB movie to an SSD. Doing so will eliminate any performance or speed slow downs from transferring a chunk of data from hard drive to hard drive. We also used a 2.5″ Western Digital Blue hard drive that uses SATA 3 connection and has an RPM of 5400.

The western digital hard drive peaks at 140MB/s data transfer rate when connected to SATA 3 ports which offer 6Gbps speed. When used as an external drive using the Orico 2599US3 HDD Enclosure, the drive peaks at 117MB/s for both read and write. Again, the results highly depend on the speed of each drives being used. 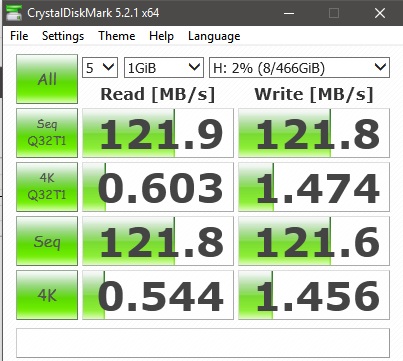 For this benchmark result, we used 5 runs of 1GiB for each test to get a better average performance of the drive when used as an external hard drive and are running on USB3.0 interface.

The Orico 2599US3 Hard Disk Drive Enclosure offers a decent build quality and feature. Which should be expected for its selling price of Php499. Nothing extravagant but not disappointing. Just right.

What I loved about the Orico 2599US3 HDD Enclosure is its simple matte finish design and the easy swapping as well. Performance wise, you don’t have to worry about any performance degradation since it runs on a 5Gbps USB3.0 interface but, keep in mind though that the performance vary from drive to drive.

What worries me though is the safety of your drive. The instruction manual does not explain much or even provide proper usage, installation, and maintenance. The manufacturer provided an extra foam along the accessories included but for of what use? I mean, it the manual doesn’t even say anything about it. The hard drives are also held in place by the foam that’s already installed. However, there seem to be some compatibility issues when you’re using fatter 2.5″ hard drives since the foam somehow makes placing the cover at the back difficult. Added to that, mechanical hard drives also indicated that you should not push the top cover but the foam inside the HDD enclosure seems to be doing just that.

Lastly, the Orico 2599US3 HDD enclosure is just a decent but not so great HDD enclosure that you can afford. I would buy this over others cheaper ones because Orico is a more known brand name than other cheap ass HDD enclosure without any branding name.