This is a spoiler-free review.

Released in February 2017, Horizon Zero Dawn was an endearing title on the Playstation 4  and has since found itself on PC which opened the Horizon franchise to a larger audience. The Decima Engine-based title featured one of the best open-world implementation on the Playstation4 and today Sony and Guerilla Games is lifting the veil on reviews for the latest installment of Horizon: Forbidden West, exclusively on the Playstation 5.

Picking up straight after the final battle of Horizon Zero Dawn, many of the game’s lore should be clear for players at this point: the reasons for the cultural regression, GAIA, the machines, Aloy’s origins, are now very clear to players. And at this point, it is important to state that if you haven’t played the original game, while the Forbidden West is able to stand alone on itself as it provides lore as it can, experiencing the original will make it much more meaningful but will also make it clear for anyone who players the new game, how vast yet subtle the changes are in Forbidden West.

Right after the ending of the original game, Aloy sets off on another journey, burdened by knowledge of further impending danger and thus setting up the opening for Horizon Forbidden West.

Utilizing the power of the Playstation 5, Horizon Forbidden West expands on everything Zero Dawn already did and took it a step further. With the expansive landscape further expanded and higher peaks now even higher, the game makes it a point to make traversal in the game a very memorable experience. This is where one of the first key pillars of the changes to Horizon Forbidden West comes into play. Traversal is an integral part of the game and Guerilla Games added new movement options to the game which should give players a sense of exploration especially when setting the game up in unguided mode where everything is for your own discovery. With the game’s verticality, it also allows Aloy to travel deeper. The game heavily promotes its underwater system and Aloy new diving capacity, she can now go longer underwater to see the lush and colorful flora and fauna under the water’s surface. Aloy can now also glide and use a grappling hook to assist her travels but the game now also expands further the indoor areas of the game.

Cauldrons and other facilities now feel larger and this allowed Guerilla Games to challenge players with more vertical and wider puzzles. Its not all perfect though, while going up and down on a mountain face or a cauldron is challenging, it does feel redundant and the game isn’t too creative in the way it allows players to approach certain locations, leaving creativity in movement very limited, with most area puzzles having only a single path to reach them. This is a surprising limitation on the new grappling hook mechanic and while it fires itself to latch onto hooking points, the mere fact that hooking points are so distinct in Forbidden West that it complete ignores the fact that a lot of structures in the game can also realistically endure the usage, leaving the tool just a niceties during puzzles.

With the larger world now comes larger and more diverse enemies. The Forbidden West introduces newer tribes and newer enemies including other machine riders which now requires players to combat machines alongside humans. The first immersion to this is also at its worst, with a group of such enemies being thrust onto players, requiring one to be quite familiar with one’s loadout to effectively and efficiently combat these enemies. In the wild, machines are more majestic with new behaviors that make predictable yet still good enough game to pose somewhat of a resistance. The Forbidden West also introduces the concept of docile machines that are not overridden but this plays more into the story so I’ll leave that to players to discover.

Going back to combat, Horizon Forbidden West still retains the classic “no-assist” mantra and this goes further than just the lack of aim assists. With the opening portion of the first game, Horizon Zero Dawn, focused on teaching players stealth tactics to hunt in Forbidden West there is a lack of introduction to new hunting approaches that the added mechanics in the game has. One has to have had a lot of experience with Horizon Zero Dawn and to an extent even Zelda: Breath of the Wild to really have a grasp of how effective combat can be a fun experience. Without such foundational knowledge, players are left to themselves. While, Hunting Grounds and Pits are there to teach players basic combat and hunting strategies, they’re not introduced as prominently in-game as the first hunt in HZD, and this leaves a big blur for most folks who just zip through dialogs.

To aid players in combat, the game introduces a couple of things. One of which is the workbench where players can upgrade their gear with the necessary items. Aloy can build up her gear using items which gets increasingly rare the further in players progress but also limits the areas where you can get them. There is also a cook which cooks Aloy certain food items which allows temporary stat bonuses. This might feel familiar for Monster Hunter World players and the pre-hunt meals there but this time, Aloy can bring along the food she is prepared. Kinda makes you think if Aloy lugs around a giant lunchbox.

Jokes aside, this brings us the strongest points of the game: its story and how everything Aloy has serves as a toolset into navigating throughout the larger narrative. The world is in peril and without the AI GAIA fully functional, the world cannot rebuild. Aloy is in a mad dash to find a solution and no in-game bugs or being overencumbered by in-game items will stop her. Horizon Forbidden West’s plot thrusts her into going west, putting her in the collision course with an equally angry tribal civil war that are also machine riders. This is just one part of the journey as a new land also introduces newer machines to contend with including giant mastodons, cobras, stun-gun wielding kangaroos to name a few. But that’s just the wilderness, Horizon Forbidden West comes out of nowhere and introduces a new party that is also looking to get what Aloy is after and this is quite a surprise for this game. I’ve not made it to the point that we’ve met again in-game but I’m looking forward to it but these folks have boss level aura tied to them along with their machine subordinates.

I should discuss the Playstation5 technical features here as well for Horizon Forbidden West: the game just maximizes on what the Playstation 5 can offer from better graphics and the larger worlds as well as haptic response and the adaptive triggers just add a bit of extra to make it a memorable experience. The game also avoids loading times with travelling the world pretty much as seamless as it can be and loading screens only reserved for fast-travel scenarios which are indeed fast. Overall, the move to the Playstation5 hardware just made Horizon a larger game and there is just “more” things in this game. The PS5 version features a Resolution Mode and 60FPS mode which allows you to switch between high-refresh rate for smoother action or crisper graphics but at a lower refresh rate. Both are playable regardless and I personally stuck with resolution mode.

The game weaves both past and present for its fear of a dark future and Aloy wants to stop it fast. Along the way, you still meet old friends and a rich array of characters, excellently portrayed by the capture artists. Horizon Forbidden West makes sure Aloy doesn’t forget what she’s fighting for despite her urgency and the people of Earth are still the lives she’s fighting for. Despite their civil wars, tribal wars or even neighborly disagreements, Horizon Forbidden West allows players to extend a hand and discover the world, one sidequest at a time.

Horizon Forbidden West is now available for preorders and can now be preloaded. Exclusively on Playstation 5 and Playstation 4. The game releases on February 18, 2022. 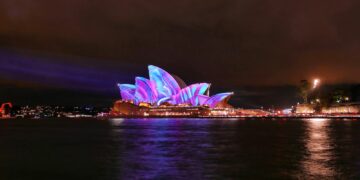