This article may contain spoilers.

Revealed in the middle of 2020, the 8th major installment to the Resident Evil franchise continues the story of Ethan Winters. Debuting Resident Evil 7: Biohazard, Ethan Winters finds himself in a European village in a quest to find his daughter following a weird turn of events in the game’s reveal trailer where we see Chris Redfield killing his wife in cold blood. In this Resident Evil 8 PC performance review, we’ll see how the game performs on current-gen hardware and see how far the new RE Engine has gone.

You, as Ethan Winters, will have to contend with lycans, mutants, a 9-foot-6-inch vampire lady and her daughters as well her sibling lords to rescue your infant child and escape this new horror that Ethan has found himself in. Welcome to Resident Evil 8: Village.

Featuring a first-person gameplay, players are now thrust head-on into the world of Resident Evil and the game is designed that there’s always that fear that something is just around the corner. Capcom’s decision to go first-person as well as minimizing cutscenes to effectively make the suspense as unannounced as possible has made the newer RE games quite the experience but with RE7 being faced criticism’s of being too scary, Resident Evil 8 aims to bring more action to the game. And I believe Capcom has accomplished to that with this game.

Talking about the more technical aspects of Resident Evil 8, the game uses the RE Engine: a bespoke engine designed for Capcom’s latest generation of games and allows full scalability for their titles which has allowed them to use it from Nintendo Switch titles e.g. Monster Hunter Rise to all current-gen releases of Resident Evil including the RE2 and RE3 remake as well as the newer games in the franchise.

Capcom has effectively built a technology partnership with AMD as all of their games have had AMD optimization out of the box as well as being provided as AMD bundles. Resident Evil 8 on PC features a heavy console base but Capcom has put on a level of graphics options for PC: raytracing, variable rate shading and AMD FidelityFX to name a few. In this Resident Evil 8 PC performance review, we do a quick analysis of the game’s GPU performance and how it handles on some of the newer cards of today.

I’ll open up with a 1080p screenshot in Low settings vs a 4K max detail settings shot of the game.

This game is very detailed and shows that Capcom has taken the extra mile utilizing the graphics budget it can work with on consoles. This is taken further when on PC as we can ramp up detail settings a bit further. Still, there is a catch:

While details are impeccable in standard distance, walking up to objects does show the details aren’t so good upclose. While is is minor and would surely never be observed this closely, it shows the kinds of techniques that games still have to use even on modern platforms and that they do still have some caveats.

Capcom has taken extreme care to put in details into this game and while that is an achievement, it does have some quirks. The shot above is for a non-interactive item and lighting, as well as details look good. An interactive item when placed in such a location just “pops” and gives players a visual cue, regardless if the action prompt is already display. I am unsure if this is by design but is something worth noting.

Regardless if you’re going to be using raytracing or not, the game is absolutely detailed and even at the lowest settings, there is just so much details to admire.

At lowest possible settings, points of interest are still given excellent details. For example, the Duke here in 1080p low.

Background details do get knocked out when set to low when played, is absolutely negligible. For PC gamers, this is what you’d refer to as console graphics for the PS4 or Xbox One which is now rightfully the minimum this game seems to be designed for.

Raytracing on this game is very subtle and is most noticeable on reflective surfaces as well as darkened area. Given the game’s extremely detailed locations and heavily crafted scenes, raytracing is but a minute addition to the game and doesn’t add the same kind of ambience as Metro Exodus but that’s because Resident Evil 8 by default designs its scenes to denote an atmosphere as that is the driving force of this game.

Screenshots are taken on max detail settings in 1440p or 4K with raytracing turned off.

The game allows changing of details in-game as well as resolution but does not allow preset changes in-game. You can enable raytracing for both AMD and NVIDIA cards as long your card supports raytracing. The game allows you to choose between presets like recommended, maximum and raytracing. For our test we just set everything to max and turned on raytracing for our RT tests.

Let’s talk about the game itself and I’ll keep this spoiler-free as much as possible, so we begin with actual worth of the game: as a Resident Evil game, RE8 is a speedrun-friendly game and after an initial playthrough to admire the world of RE8, the game will progressively push players into pushing how fast they can finish the game with various post-game rewards.

This is Resident Evil at its core but many players don’t find this kind of replayability worth the AAA asking price of the game. I personally feel the game is substantially short and linear and while it doesn’t outright provide handholding, the design of the areas put players in a formulaic “find this so you can get this and move on to next area” kind of loop.

Where the game shines though is sheer experience and while the 4 robot masters -ehem- I mean lords isn’t a new thing for video games, Resident Evil has been predominantly been anchored on one big bad and their spawn but never has there been an incredibly designed ensemble such as this.

We have to admire Capcom’s ingenuity of knowing how to cash in on Lady Dimitrescu’s fame and its inevitable a DLC about here would come sooner or later but not to spoil anything in-game but Alcina Dimitrescu, her daughters, Heisenberg and the other lords, while not having backstories that everyone can relate to, are unique enough to put them in a unique position that the experience within each lord’s area makes them a very memorable experience.

As Resident Evil becomes the unique horror adventure that its set out to be, Resident Evil 8 increases the action element to make the game feel more substantially controlled by the player rather than the other way around. The game is still limited in how fast it moves so it doesn’t become too Call of Duty-like and despite supporting keyboard-and-mouse control, will still feel really limiting to some and this is by design.

PC players used to the experiences offered by other first-person horrors will be shackled to Resident Evil’s unforgiving, slow-as-molasses control but this isn’t as slow and restrictive as its predecessor hence why players are saying its too action-ey than scary. I, too, echo this sentiment and Capcom should really tune the game more into what into want to achieve.

As a whole, I feel Resident Evil Village is an entertaining experience built on top of memorable characters and a solid gameplay experience.

Resident Evil VIIIage is available on Steam for $60.

Built with next-gen consoles in mind, Resident Evil 8 is built with modern hardware in mind and the Playstation 5 and Xbox Series X has really advanced console games which is actually a good thing for PC. With such a high minimum baseline, devs can really step up and show us how little they can work with yet still offer so much.

Resident Evil is a fine example of Capcom’s photogrammetry at work. As they release more games, their tech has improved significantly and RE8 is a nice achievement in capturing facial nuances which really helps drive ingame interactions with other characters.

Nitpicking though, while character details are high, graphics budget on some details aren’t that high but this is putting scenes under a microscope already. Normal traversal of a scene would never trigger a laygamer and have them say “hah! that snow detailing sucks”.

Focusing more on hardware specifics, as you can see in our charts, the game heavily favors AMD and given its a technology partnership this is to be expected. This performance advantage does immediately get thrown out the window once raytracing is turned on. AMD’s Radeon RX 6800, our only AMD card that is current-gen, suffers immensely when raytracing is enabled compared to its stellar raster performance.

With a non-XT RX 6800, the game is absolutely in playable range and gives no reason to not enable raytracing. The crux for raytracing is that this game has rather poor use of it and really puts into question why you would bother with raytracing as well. This does make it confusing but like I always say, its better to have it and never need it as you’ll have the FPS power regardless if the game suddenly updates to include better RT.

Resident Evil Village is a well-optimized game and my only criticism would be that Capcom’s PC controls are some of the dumbest in the world with mouse integration being the weirdest in the UI, other than that, RE8 as a whole feels like well-built port of its current-gen console counterpart.

I will leave this part open for now and leave you with hanging at this thought as I plan to review to expand this article further covering low-end graphics from Intel Xe, AMD APUs and the benevolent GTX 1050 Ti in the coming days.

Here’s a close-up of Duke’s ankle on 1080p low because reasons: 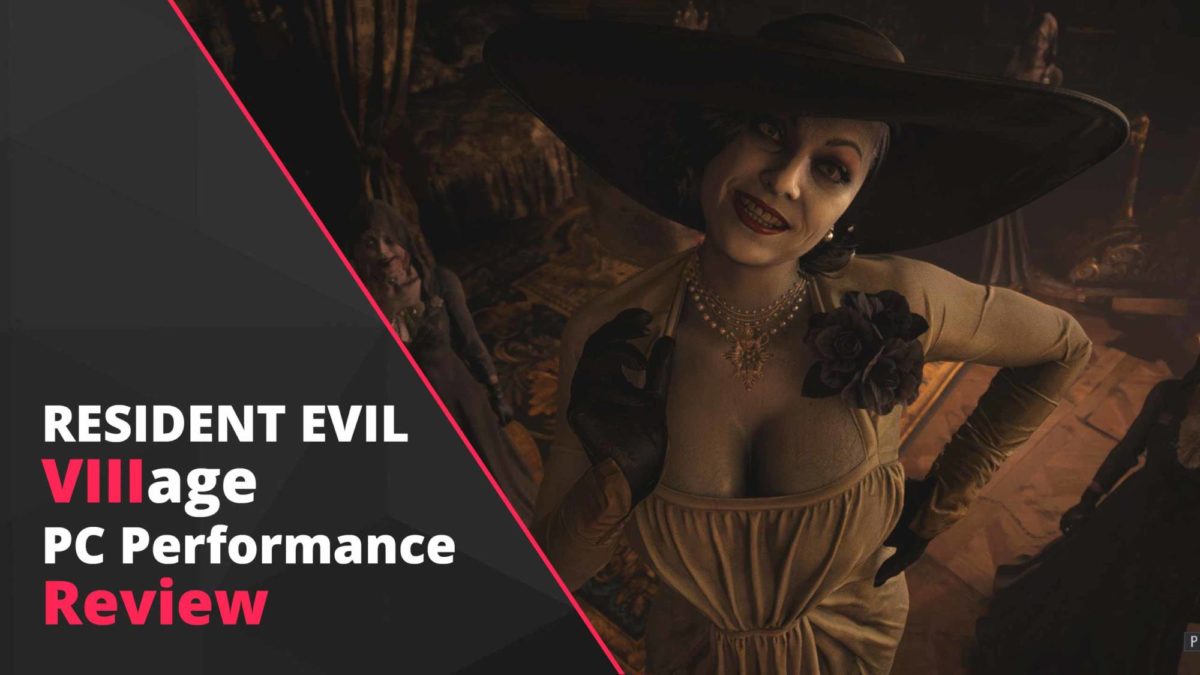