SSDs are carving a nice path for high-performance storage, and the last 5 years have seen more usage of SSDs than ever before. With Gen4 SSDs introducing more speed than ever before, development in SSD availability has also reached an uptick. This means that applications and activities that utilize faster storage are definitely benefiting from this growth. For enterprise and business users, it was already a trajectory most are pursuing but on consumer platforms, its not as easy as plugging things in. One has to consider if their device supports the portable SSD’s throughput, etc. So there’s a lot at play here. What is one to do?

GIGABYTE recently released the VISION DRIVE. Their portable SSD which is part of their VISION lineup of creative and content creation products. The drive is rated for USB3.2 Gen2x2 which means it can do roughly around 20Gbps which is true USB3.2 Gen2. Now USB standards in itself is murky so I apologize in advance if you catch some USB3.1 Gen2 instead of USB3.2 Gen2, blame the USB committee.

Anyway, with USB already having so much bandwidth and with USB4.0 coming in offering so much more. Consumer laptops and desktops can now utilize expansion with SSDs so much easier. This leads to working with videos files, large graphics or other projects that benefit from faster storage, so much easier. For most of our examples, it would be working with 4K videos. With raw, uncompressed 4K almost going at 1GB per minute or more. That being said, with creative workflows now revolving around the capture > edit > publish workflow, being able to transfer these files faster is much more handy. 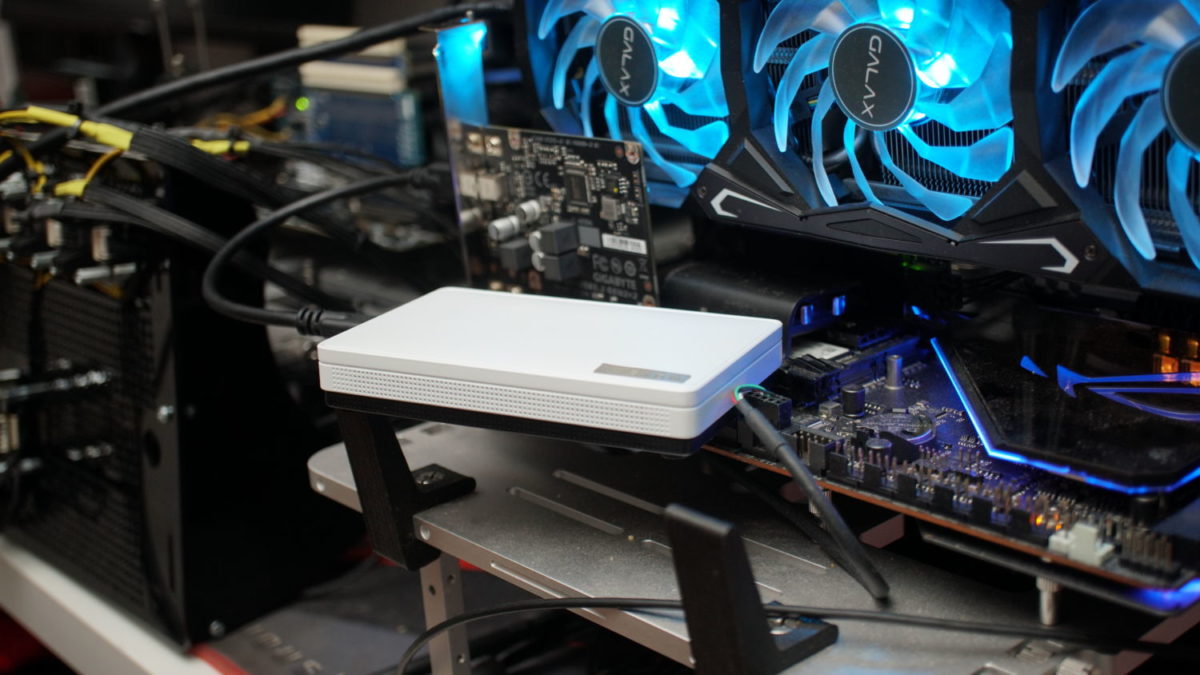 This is the GIGABYTE VISION DRIVE 1TB external SSD. As of this moment it only comes in 1TB capacity but that should be enough to allow you to move from plenty of data. GIGABYTE sent us an early sample which I completely forgot about until they sent a PR. Now I’m trying to be funny on that last one but the real honest bit is that I was taken by surprise that this is an upgrade kit. To my surprise, it wasn’t just the drive, it also came with a PCIE card for a single USB3.2 Gen2x2 connection. 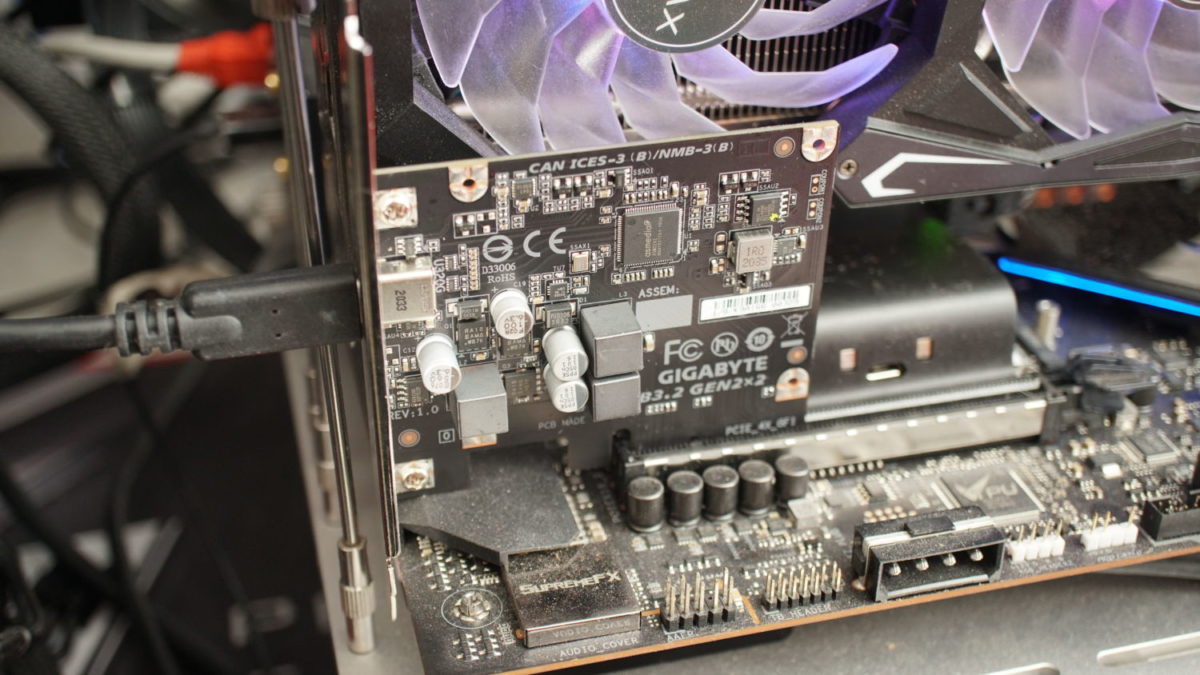 This means that the SSD inside the GIGABYTE VISION drive can flex much of its Gen3 speeds so you’re not tied down to USB3.2 Gen2 speeds of 10gbps (roughly 1GB/s sequential), you can breach past 2GB/s with this card. Motherboards and laptops that have USB3.2 Gen2x2 connection will also be able to utilize these speeds. 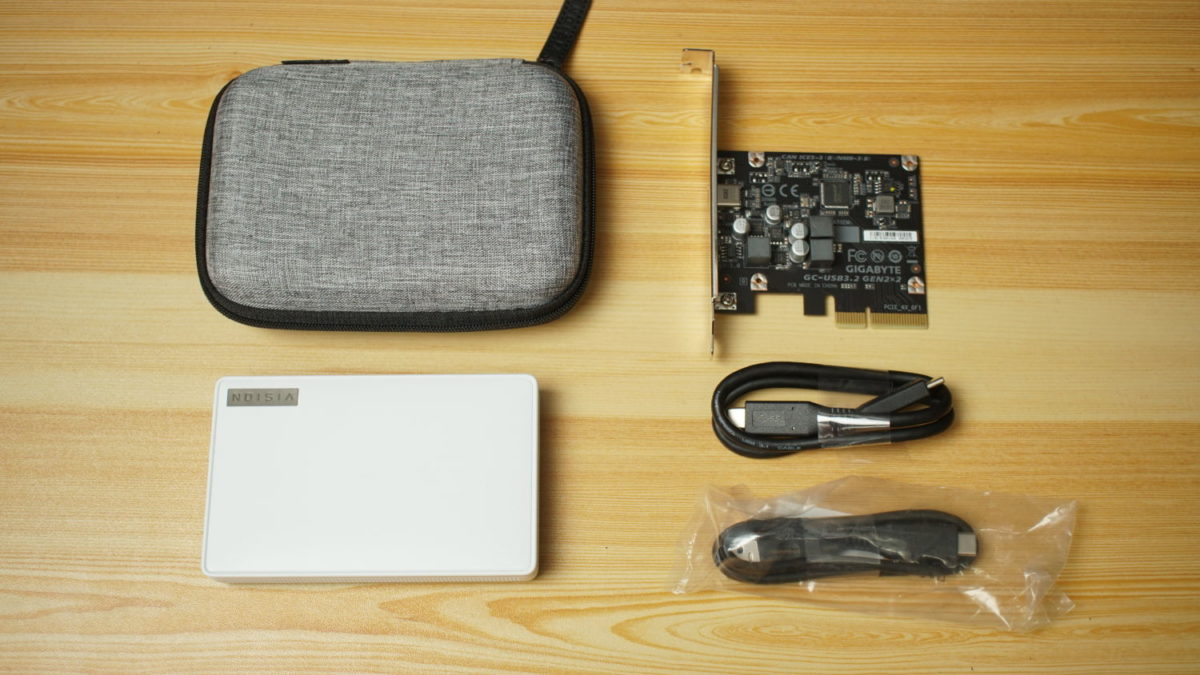 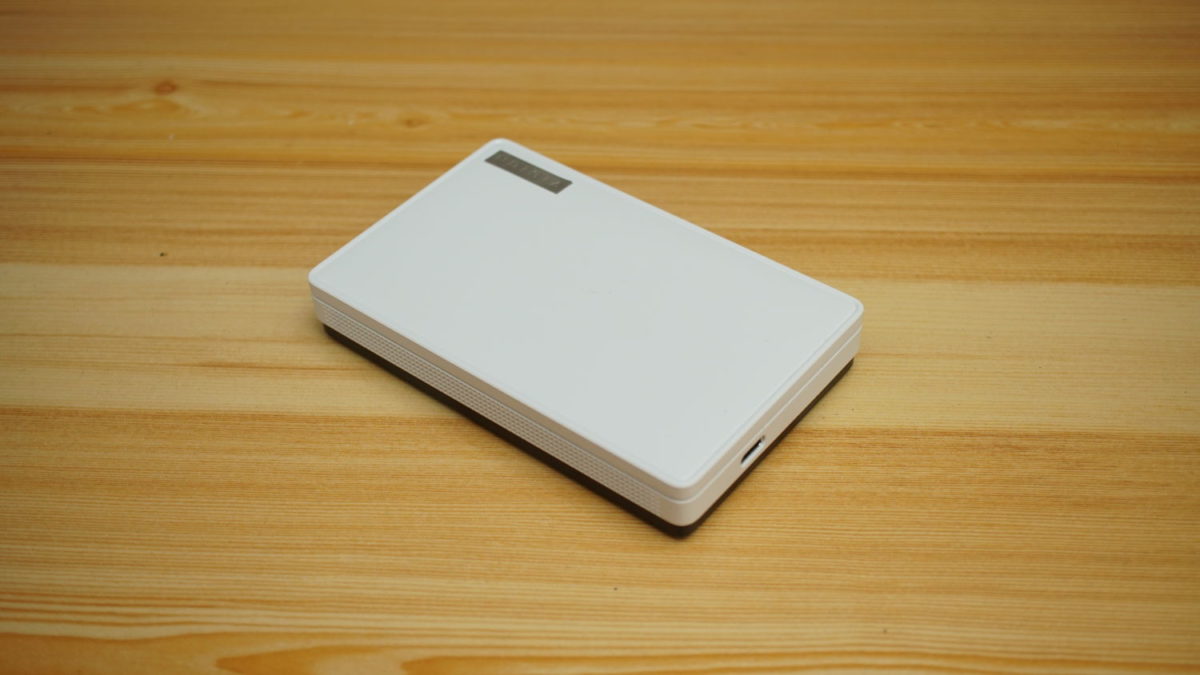 Despite packing an M.2 SSD inside, GIGABYTE went with a more traditional drive enclosure design mostly seen for 2.5″ drive. This is wasted opportunity and makes me question if GIGABYTE meant this for use with either a SATA SSD and an M.2 SSD but so far, all we have is the M.2 option. 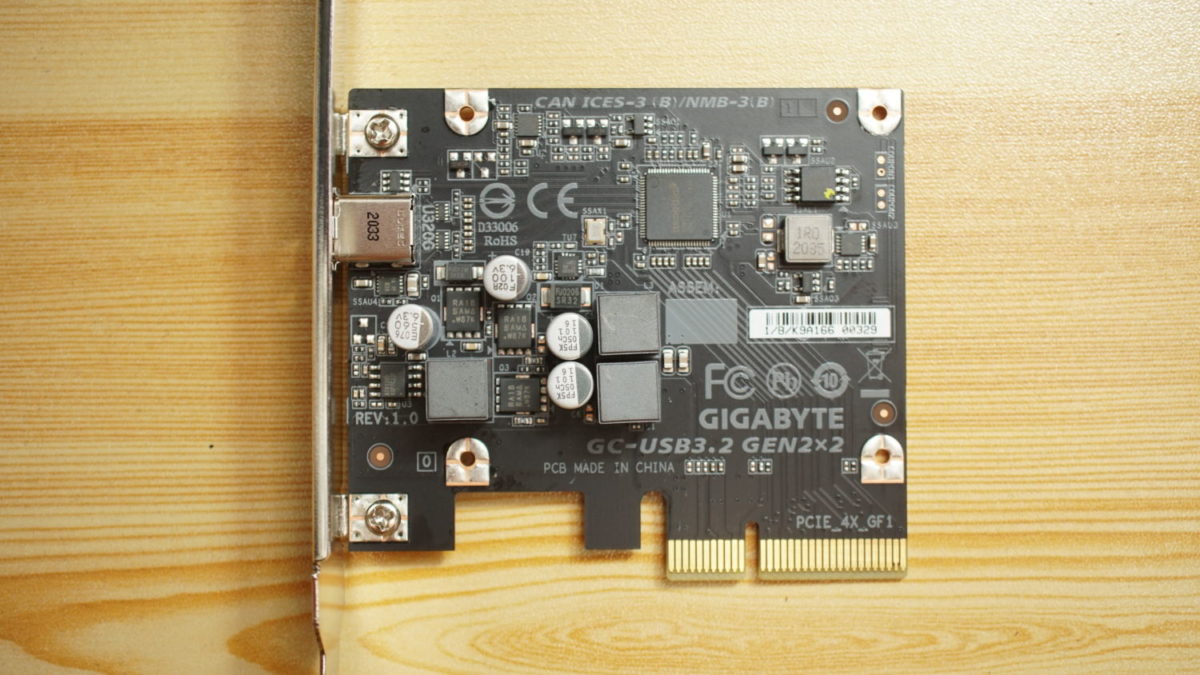 GIGABYTE sells the VISION DRIVE as standalone and as an upgrade kit (the one we have for review). As a standalone drive, you can get the same performance provided you have a USB3.2 Gen2x2 port available on your PC. The drive is backwards compatible so it would work with any USB ports but speeds will greatly suffer. This is why GIGABYTE is selling the upgrade kit that includes a single USB3.2 Gen2x2 port for use with these devices. 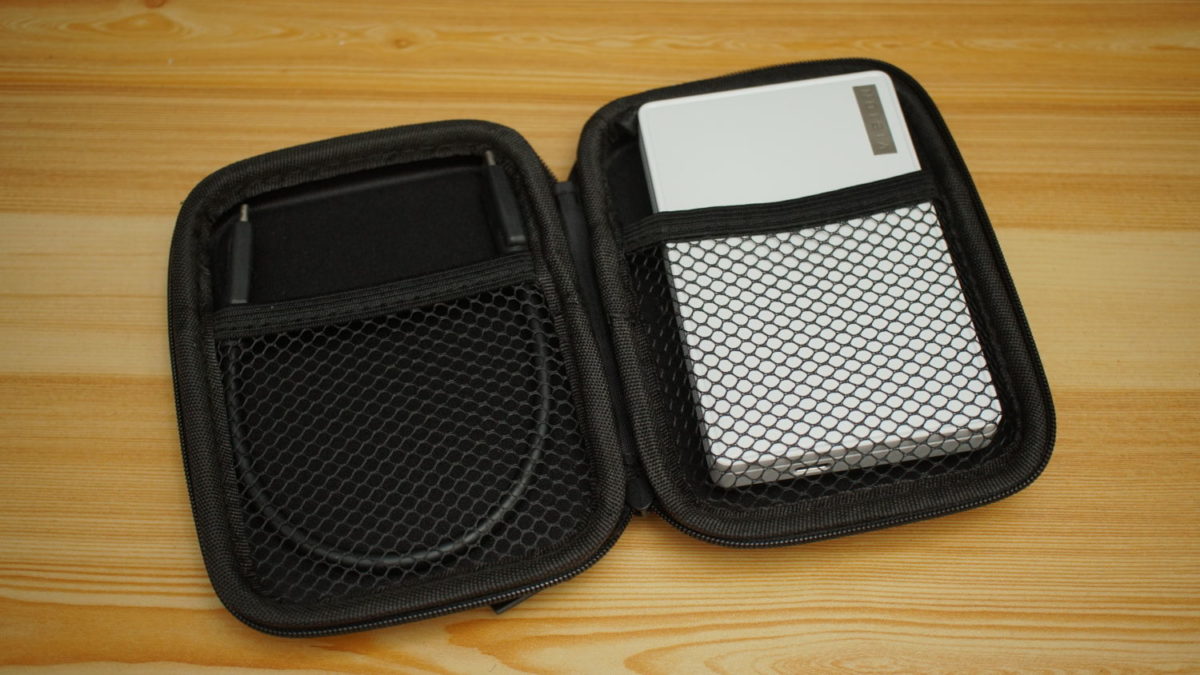 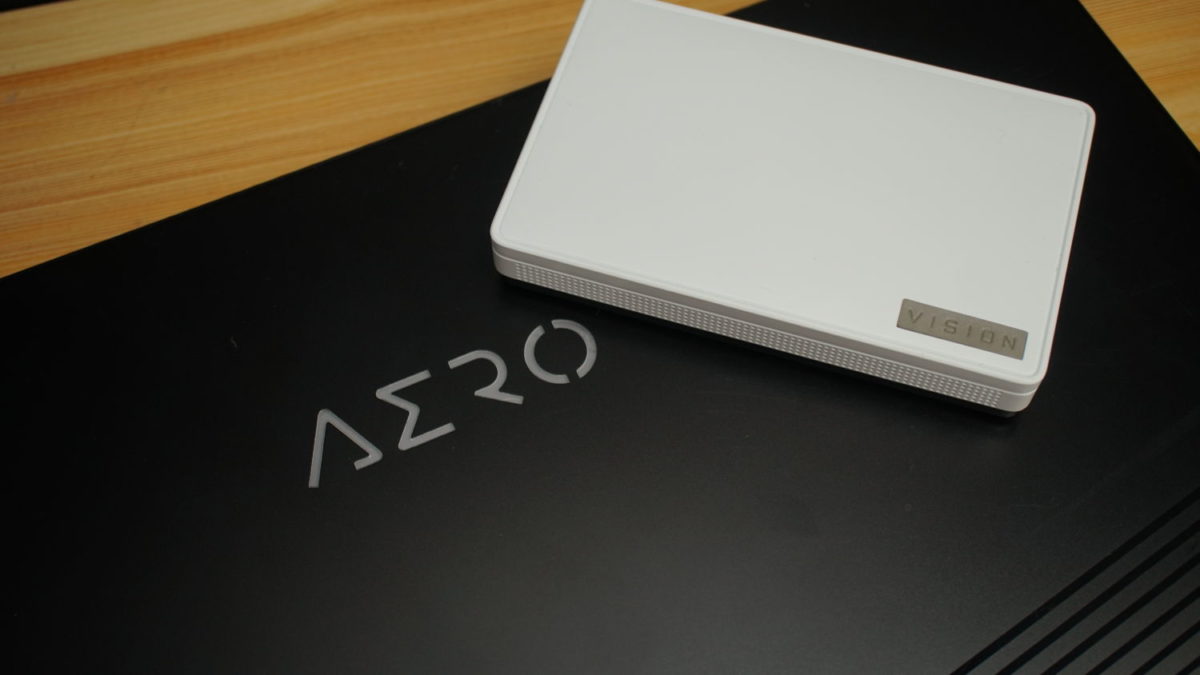 First things first: GIGABYTE VISION is part of the GIGABYTE motherboard/VGA business unit while the AERO is part of GIGABYTE’s laptop business unit. These people don’t work directly together. This is why we have a white VISION drive and a black AEROX laptop in the same generation. Just like the AORUS line, if GIGABYTE feels the need to unify their creative lineup, either one of these series may end up as the branding for both.

Backstory aside, the GIGABYTE VISION DRIVE works for creative professionals and content creators that work directly with large footage and need to edit them on the go. We can’t confirm support with Blackmagic Design Pocket Cinema with the Vision Drive as well as compatibility with USB-C Sony and Canon cameras. That said, if they did, it would be a faster experience to edit them directly on a USB3.2 Gen2x2 PC.  And that’s where the strength of the VISION DRIVE comes in. Even if we aren’t able to use full Gen2x2 USB3.2 speeds, at 1GB/s, this is still a fast transfer rate so you can drop them directly on your laptop’s SSD or your PC. With the USB3.2 Gen2x2 upgrade card from GIGABYTE though, even an entry level PC can be able to use this drive it all full speed.

Of course, the situation here is mostly looking towards creators and multimedia people, those who work with large files but will benefit greatly if the files are readily and rapidly accessible. At 2000MB/s though, that’s still faster than a SATA drive and if you’re like me that has used up all his M.2 slots, something like this would be a good alternative. Heck, I use mine for all my Ubisoft games. Anyway, below are some benchmarks for the GIGABYTE VISION DRIVE.

On to some tests, here’s the GIGABYTE VISION DRIVE with the upgrade card installed in our test bench. These are all tested on M.2 slots except the VISION DRIVE which was connected via USB3.2 Gen2x2. 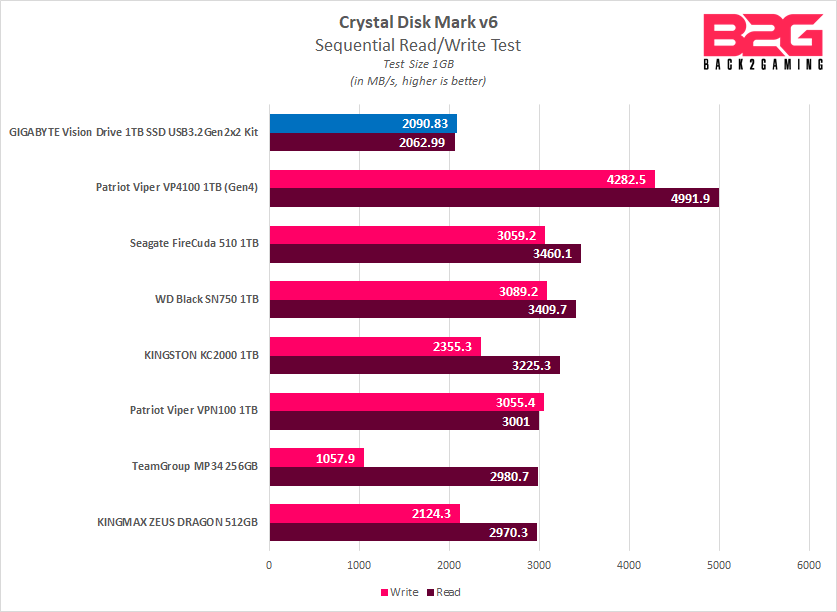 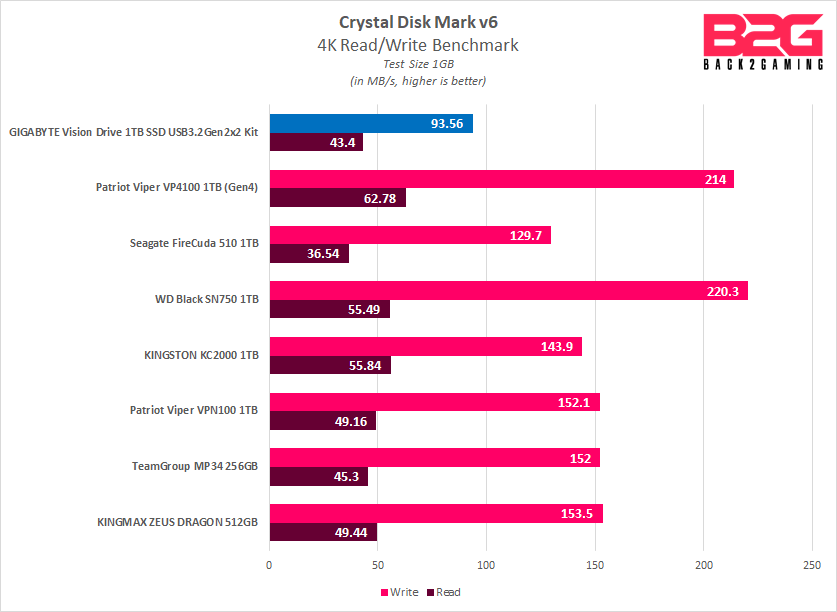 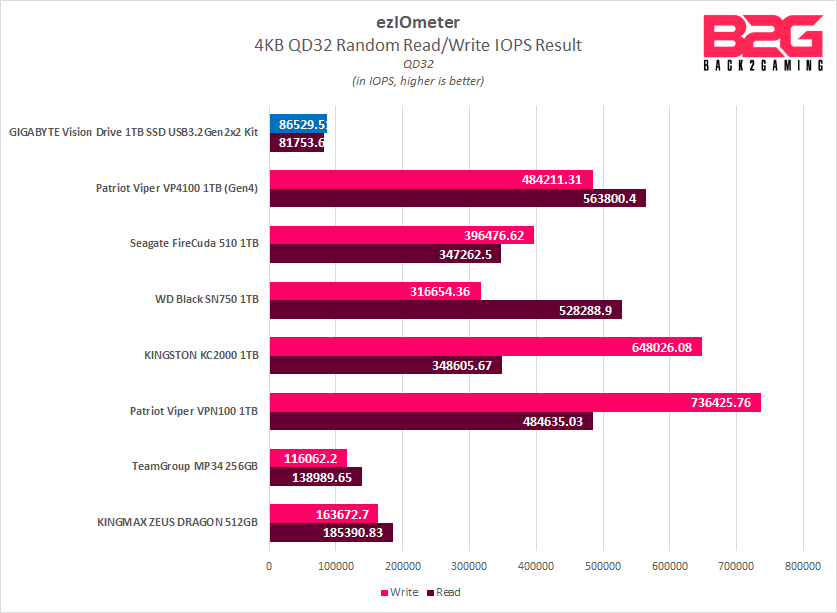 From a sequential perspective, everything looks great so for use cases where access is pretty much copying and reading large files like 4K videos, then this drive would excel. As a general use drive, there would be some factors that would affect performance but that would still be up to you on what kind of perform expectation you have on your system. Small file access looks decent but random IOPS would put a hit on applications that utilize various small files. That last one would be rare from a creators use case but editing directly on the drive would introduce that variability and would of course perform definitely less than a directly connected M.2 drive. 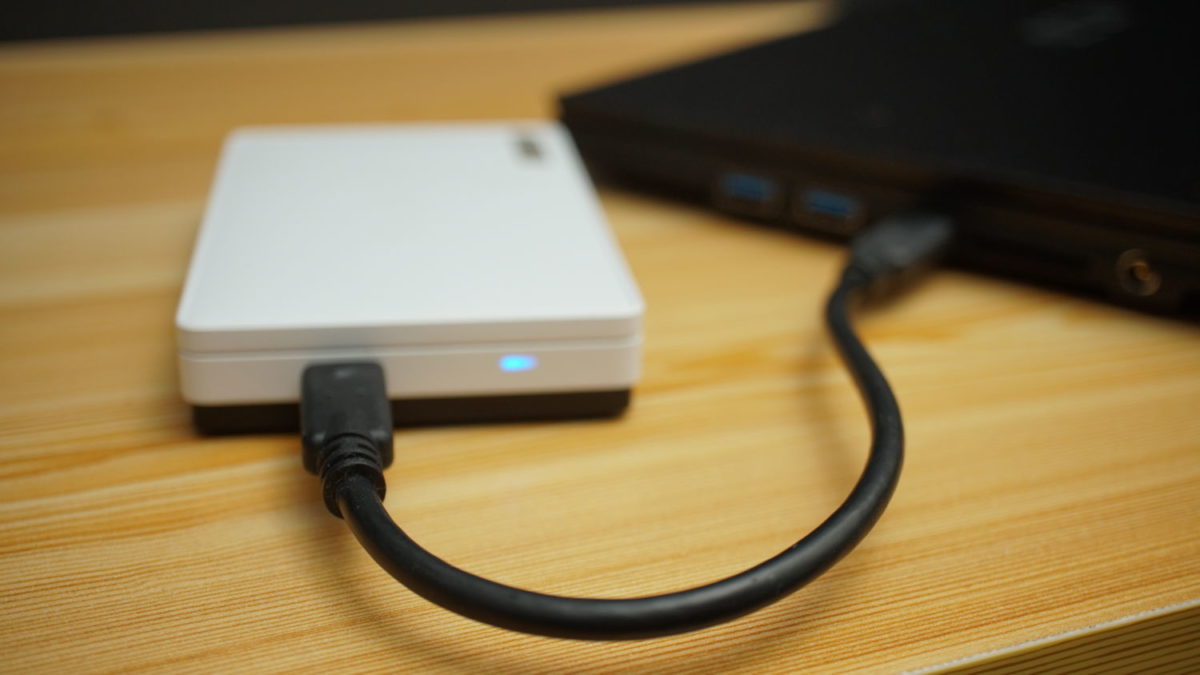 If you’re looking for a fast external storage, you’re probably safer with any USB3.2 Gen2 drives from Samsung or ADATA. But if you know fully well your requirements, the GIGABYTE VISION DRIVE 1TB external SSD may be for you. Again, to clarify, as a general use SSD, the GIGABYTE VISION DRIVE is a fast all-around storage for many use-cases. But to unleash its full potential, connecting it to a USB3.2 Gen2x2 port found in some high-end motherboards is the best way to go. If you don’t have such a port, the VISION DRIVE Upgrade Kit with the included PCIe card will give you that flexibility. This allows editors to capture, save and publish videos in one drives and in situations where you just want to get the work done and travel light, the GIGABYTE VISION DRIVE can replace Thunderbolt 3 RAID enclosure any day.

Local pricing has yet to be announced for the GIGABYTE VISION DRIVE Upgrade Kit as of this writing but we expect pricing to be a bit higher than a 1TB Gen3 M.2 SSD. We’re expecting around $200, more or less. GIGABYTE does state they will offer it a reasonable price but as it is, we can’t comment on pricing. Australian pricing puts it around Php12,000 or $229 for the upgrade kit so it is a $50 premium over standalone M.2 drives. The difference maker here is the USB interface and the USB3.2 Gen2x2 card. Right now, I don’t see an alternative other than getting a pricier mobo so if that’s not an option, then GIGABYTE present a compelling product here.

In closing, this is a niche product for a niche but growing market. Many BMPCC users already adopt a workflow the uses portable SSDs for their cameras and edit the footage directly there. The GIGABYTE VISION DRIVE would benefit much from a smaller body and BMPCC and other USB-C camera compatibility with the ability to go to a faster port on laptops and PCs to do the editing. As it is though, the GIGABYTE VISION DRIVE is  an attractive option for those that need faster storage but need it easily accessible between many PCs, its definitely a compelling option.