There was once a time where 120Hz was the holy grail of gaming. That evolved to 144hz and so on and forth. Today we’re faced with much more variation and gamers now have the option of going with higher resolution or a faster screen. It is also an option to have both but that comes at a cost, and its something that’s yet to really catch on. What has caught on though is 144hz and with 1920×1080 or Full HD still maintaining its position as the most popular resolution for gaming, its not strange to see cost really going to down this segment. For the last 2 years we’ve seen a steady decline for 1080p 144hz monitors pricing and many have reached sub-$200 or Php10,000 pricing even for name brands.

Much time has passed since those screens hit stores and panel technology has matured. Today we have one such monitor featuring the more robust, budget screens for gamers: the Lenovo G24-20. In what can only be described as a pure-essential, performance monitor, the Lenovo G24-20 is another one of Lenovo’s daring price-to-performance option that disrupts the market. Sporting a factory-overclocked 165Hz display, this screen stretches the visual fidelity to a higher level.

The Lenovo G24-20 comes in a wide, brown cardboard box with a shot of the product in front. Take note of the actual model labeled in the package as this will be primarily be marked in the sticker label and not the actual box.

Inside the package we have some cables, documentations and the monitor which comes in a few parts. Thankfully, these all lock themselves together with screws that are all included in the package.

Fully assembled, the Lenovo G24-20 will look just like any monitor and its most glaring gamer aesthetic would be its stand, particularly the feet which get a touch of blue, broken up into sci-fi lines which adds to give a subtle gamer aesthetic.

Towards the back we have the stand attached to the main screen via 4 screws. These holes line-up with standard 100x100mm VESA mounting holes and you can use them with compatible monitor stands.

The G24-20 has fixed button controls for its OSD which are accessed on the rear of the monitor over to the right side facing the user.

The monitor is powered off AC power directly on the monitor with input options including two HDMI ports a single DisplayPort input and an audio output port.

Once on, the screen is readily able to do 165Hz out of the box. There is no OSD option to enable overclock options which is good. 165Hz will work on both HDMI and DisplayPort. HDMI 2.0 is capable of support the necessary bandwidth for up to 1080p 240hz so 165hz is doable if you have the right hardware. Take note this will involve your source (GPU) and to an extent, your cable as well.

The screen is decent enough and doesn’t have any flickering or noticeable hot spots. This is an IPS screen so viewing angles is decent. The screen is rated for 350 nits of brightness but only tops out at 300nits per our testing with averages of 250 nits. 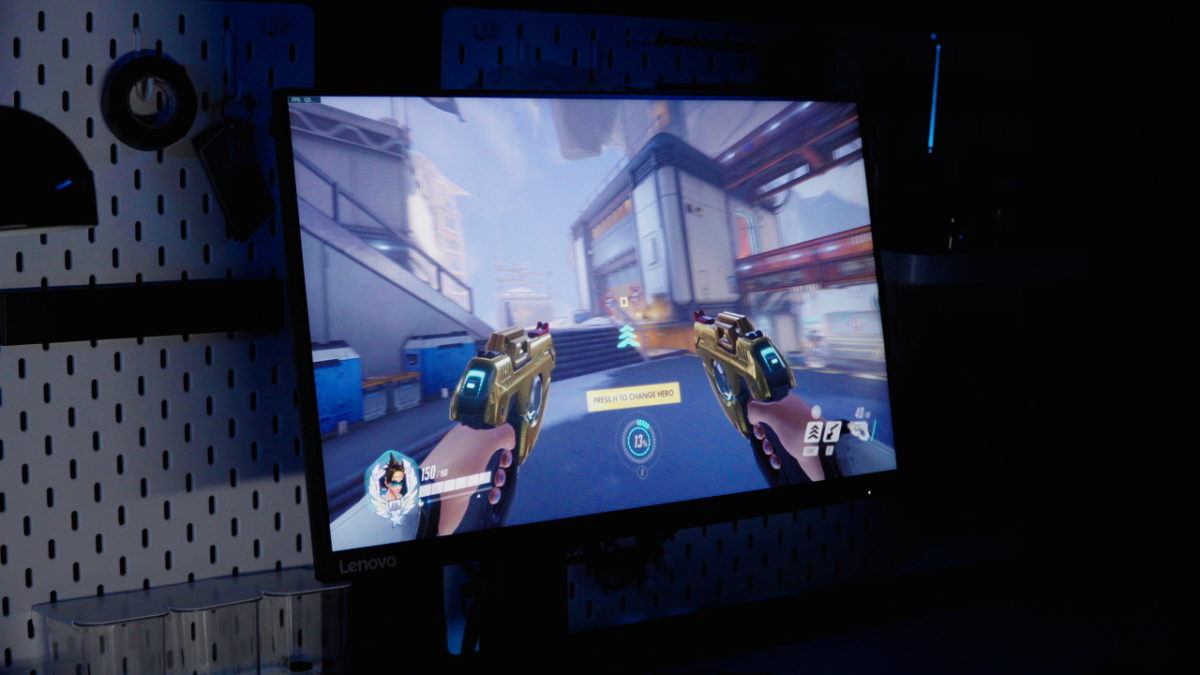 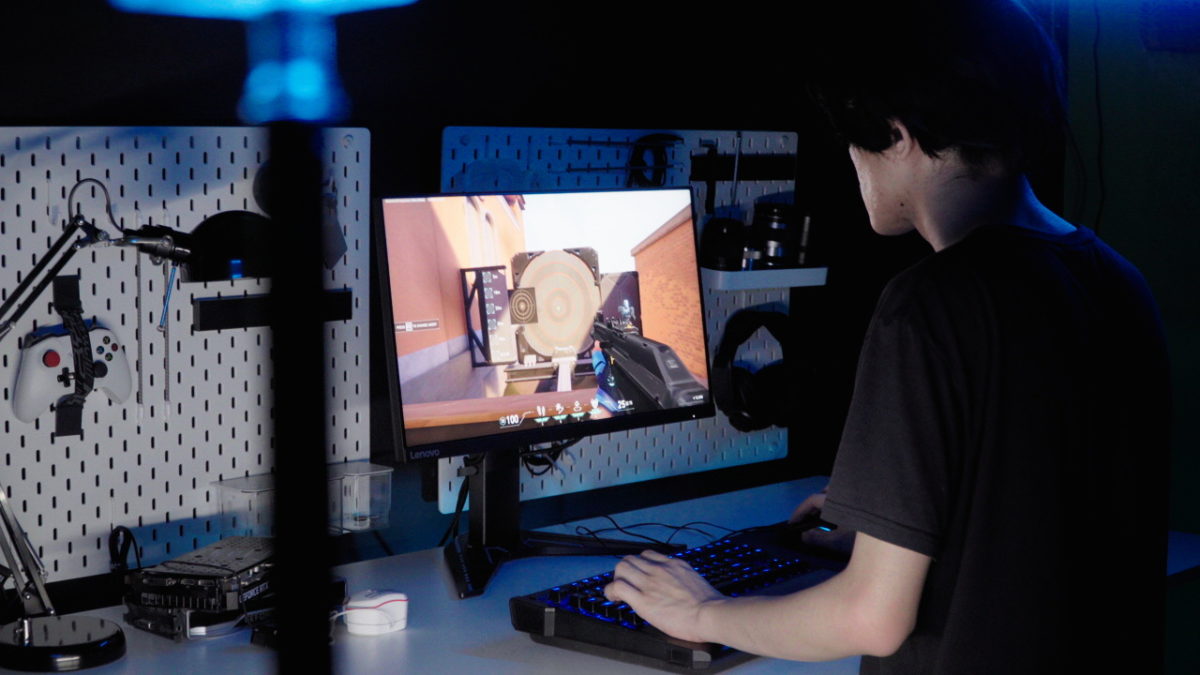 Gaming is the core strength of this monitor and its fast refresh rate lends itself well to FPS games. The screen supports AMD Freesync and is fully G-Sync Compatible as well with no issues so it will work well with AMD and NVIDIA systems.

In the video above I go into details about some of the aspects of this monitor including brightness details as well as HDR but to summarize, the Lenovo G24-20 monitor is an impressive gaming monitor. Screen response is fair and for most gamers, even very discerning ones will likely appreciate this monitor. For the most part, it does its job fairly well and Lenovo does go out of their way to make this a good deal despite the market being flooded by B-grade monitors that offer the same set of features for less.

While it is not a slight to the G24-20’s prowess, Lenovo’s choice to go with HDR is one of the glaring concerns I have with this screen. There will be folks out there who will opt for this monitor as their starting screen when they first use a PC and will probably go into the settings and start toggling buttons. The HDR option in Windows 10 is readily accessible and with this monitor’s very poor HDR quality, it should’ve just been left out entirely. Aside from that, another very minor nitpick is brightness but this mostly applies for people that want to use this as a creative screen as well. All in all those are just the slightest criticism I have with this screen, on top of the the lack of a panning stand.

Is it a good monitor? Absolutely but even at its very cheap price, many will still ask the question if its worth it and the quick answer is a resounding yes. Even if you’re just gauging the fact that you could probably buy a similar one for less, one of Lenovo’s strongest point is their customer support. Lenovo has had great success in their business not just because they have great products but very impressive customer support. That said, you’ll have peace of mind for the duration of your warranty that you will get some of the best quality product as well as support for that product during those times.

With that being said, this is an easy recommendation for starting gaming PCs or those that want to jump to the next level of monitors coming off 60hz. The primary competitors here are from ASUS with the VP249QGR and other panel variations from Viewsonic or AOC, most of these competing monitors will have a similar price point but currently top out at 144hz so the extra cost, if the price are not the same, will be worth it. Honestly, the closest rival that the Lenovo G24-20 is against the G27-20, the 27″ version of this monitor which is a few thousands higher in price but in some listings has seen nearly similar pricing.

That said, I highly recommend the Lenovo G24-20 primarily for gamers. It’s a good all-around monitor. At Php11,995 it’s a great deal. Check it out now at Complink for great deals. You can check out more Lenovo products at Lenovo and Legion concept stores and also Complink stores nationwide. If you can’t make it, you can head over to Lenovo Legion and Complink Viber communities.