So here’s a story about how we’re landing on the Corsair K70 RGB TKL Champion Series: I’ve had all the original Corsair mechanical keyboards back in a time where Corsair was still experimenting in how they’re going to approach the gaming market. The original gaming line was the Vengeance line and their first mechanical keyboard was the Vengeance K90 released just a little after the turn of the decade in the 2010s. This is an MMO keyboard, back in the days where MMO was still relatively a big deal and brands still poured MMO budgets for peripherals.

The K90 lives on today for those that still have it as one of the best macro keyboards for video editors. But back in the day, it was an overengineered piece of tech and people wanted something simpler. Enter the Vengeance K70. The first standard layout mechanical keyboard from Corsair and one they would design primarily for FPS players. Fast-forward 10 years later and the FPS world has changed along with the entire esports landscape. While MMOs still exist, MOBAs and FPS are the king of esports and research & development has pushed peripheral technology to the next level. Still, keyboards are still keyboards and there’s only so much you can improve upon them. Despite a growing interest in mechanical keyboards, for the majority of esports professionals, speed is always king and that encompasses both speed in performance and speed in setup.

In this review, we’ll take a look at the Corsair K70 RGB TKL Champion Series mechanical keyboard: the Champion Series carrier keyboard aimed at FPS pros and tournament professionals.  Before this release, there is no K70 TKL, just the K65 and K63.

Read on to find out more! 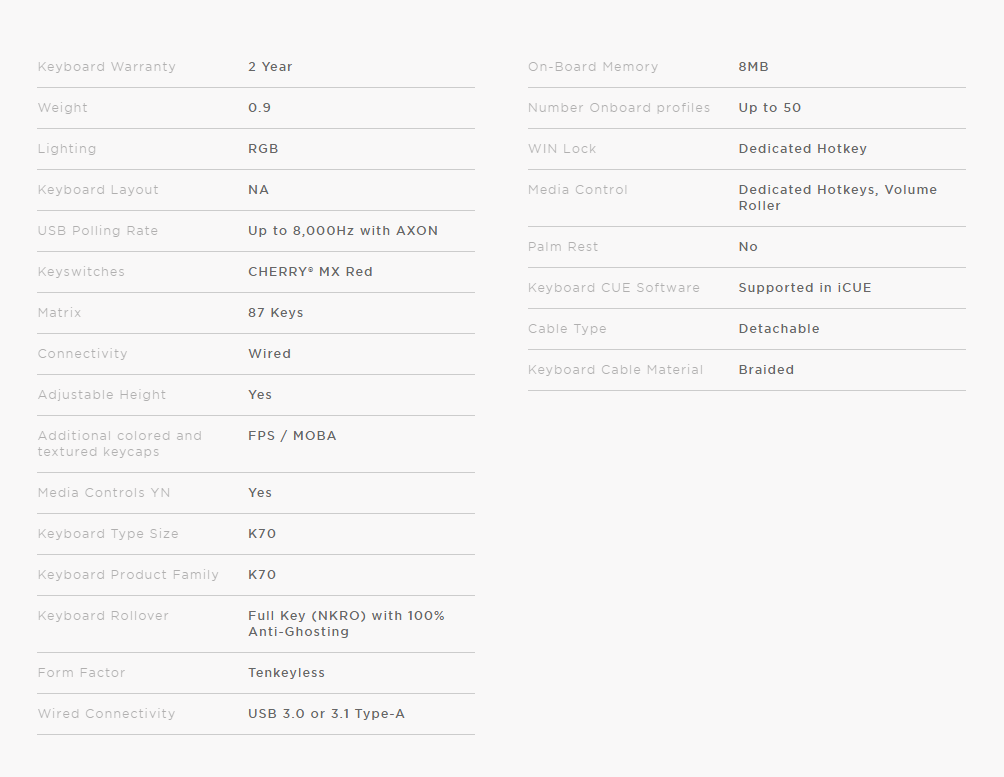 The Corsair K70 RGB TKL Champion Series keyboard comes packaged in Corsair’s signature packaging: the yellow trim and subtle triangles in the background serving as backing for the main product with a large full product shot of the keyboard on the front. The back has quick feature list of what the keyboard has to officer. The main marketing icons include the Champion Series badge, AXON Hyper-Processing technology, Cherry MX and iCUE.

Included in the package is the K70 RGB TKL Champion Series mech keyboard, a WASD and QWER keycap set for MOBA and FPS specialized use, a keycap puller, a braided USB cable and some documentation.

Included in the package is a sleeved USB Type-C cable 6′ in length. While it is slimmer than the standard K70 hard-wired cable, it still is a bit firm which I have to say is one of my immediate concerns with this keyboard. An inline velcro strap is included which is a nice touch.

Unlike the original K70, the textured keycaps for FPS or MOBA are not done in red but in a more neutral dark grey. Its a small detail, but something brighter to defeat the RGB theme would’ve really helped define the sets better.

The textured keycaps have custom profiles to them aimed for optimal design for gamers. Notice that the keyboard curves and tapers to guide the fingers better on the keys. This is nothing new and Corsair has been implementing them nearly a decade ago with the original K70.

And here’s a comparison of the Corsair K70 RGB TKL Champion Series versus their original TKL: the Corsair K63. As you can see, the overall design is similar but there are some things that have changed most notably the size as the K63 is wider. The overall design is the same though with the Volume Wheel replacing the manual buttons on the K63 but otherwise everything remains the same.

This keyboard is pretty much the K70 Mk.2 just in TKL form and a proper one at that. As mentioned above, it does not lose any of the primary features of the full layout version.

To keep the keyboard at a premium level, Corsair is including PBT double-shot keycaps with this keyboard on stock. We do lose Corsair’s big fat fonts on the standard ABS keycaps which is a shame but given that it seems most of these gaming companies source their PBT keycaps from one company, all of them look the same.

The Corsair K70 RGB TKL Champion Series comes in Cherry MX Red and Cherry MX Speed Silver, both of which are the preferred switch types for fastest input. Now if you have a preferred switch, you’ll need to do some work as these are not hot-swappable.

Here’s a shot of the FPS keycaps installed with the lights on.

And here are the MOBA keycaps installed.

Here’s where being a Champion Series comes into play: with the Tournament Switch. Located just beside the USB port, the switch disables macros, fixes lighting to a static color.

Outside of tournament mode, the Corsair K70 RGB TKL Champion Series switches to static lighting by default but can be switched via onboard shortcuts:

The lighting can be manipulated via more Fn shortcuts like switching the light direction or increased lighting or effect speed:

The Corsair K70 RGB TKL Champion Series can save iCUE settings profiles to basically save various settings into the built-in memory , along with the hardware defaults. This can be set thru iCUE on your main PC and will be stored in hardware regardless if the host PC has iCUE installed or not.

The Corsair K70 RGB TKL Champion Series is fully supported by iCUE and can be synced with your entire Corsair hardware ecosystem.

This keyboard’s main highlight is its responsiveness but unlike its mouse partner, the Sabre Pro Champion Series, I don’t have this keyboard hooked-up to my LDAT for a more scientific test but regardless, this keyboard feels very responsive. Much of that is due to the Cherry MX Speed Silver which is what our sample uses. As someone who uses clicky switches, I tend to have a harder keypress so switching over to Speed Silvers meant I didn’t my tactile click but the response was there. As I finish up this review with the K70 RGB TKL Champion Series, I can definitely say it is just like any of my MX Speed Silver keyboards when it comes to overall typing experience.

In actual gaming though, in FPS games depending on your playing style, you’d most likely want to go linear hence the choices are limited to Red and Silver. At 8000Hz polling rate, this keyboard is really fast but putting that in actual application, is very complex and your susceptibility in perceiving this difference in response will require a few factors but most particularly you as a gamer followed by how responsiveness your machine is.

I talked about features in the earlier sections but to summarize those points: the Corsair K70 TKL RGB Champion Series is literally a TKL K70 with a manual profile switch. By flipping the Tournament Switch to on, features like macro and lighting get toggled to “safe state” which players touring on LAN or joining competitions can switch to game on neutral settings and avoid any potential problem which may lead to technical issues or a tactical pause. Regardless in which mode you use the keyboard, the experience would be the same for both performance and responsiveness: thanks to the switch of choice it is a very fast keyboard and Axon, while gimmicky, may have its merits, it will ultimately boil down to the player on how beneficial the keyboard is.

So in closing, I won’t dock being a TKL keyboard here as something that needs to be defined. TKL has been an FPS go-to layout for many a years now so that’s already brownie points for all the Vengeance K70 and K70 M.2 users out there. The K63 was fine, but with the model already phased out, its time to see a proper replacement and the Corsair K70 RGB TKL Champion Series is far beyond what I was asking for.

There is still the question of when Corsair will transition to wireless though, but that’s another story. For now, the Corsair K70 RGB TKL Champion Series is a solid TKL-option for gamers looking for a dependable workhorse for their competitive gaming needs.

Corsair backs the K70 RGB TKL Champion Series with a 2 year warranty. I give my B2G Recommend Seal! 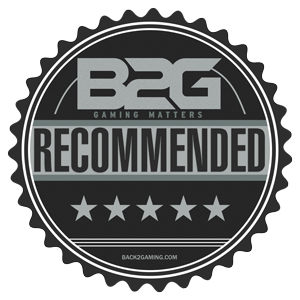 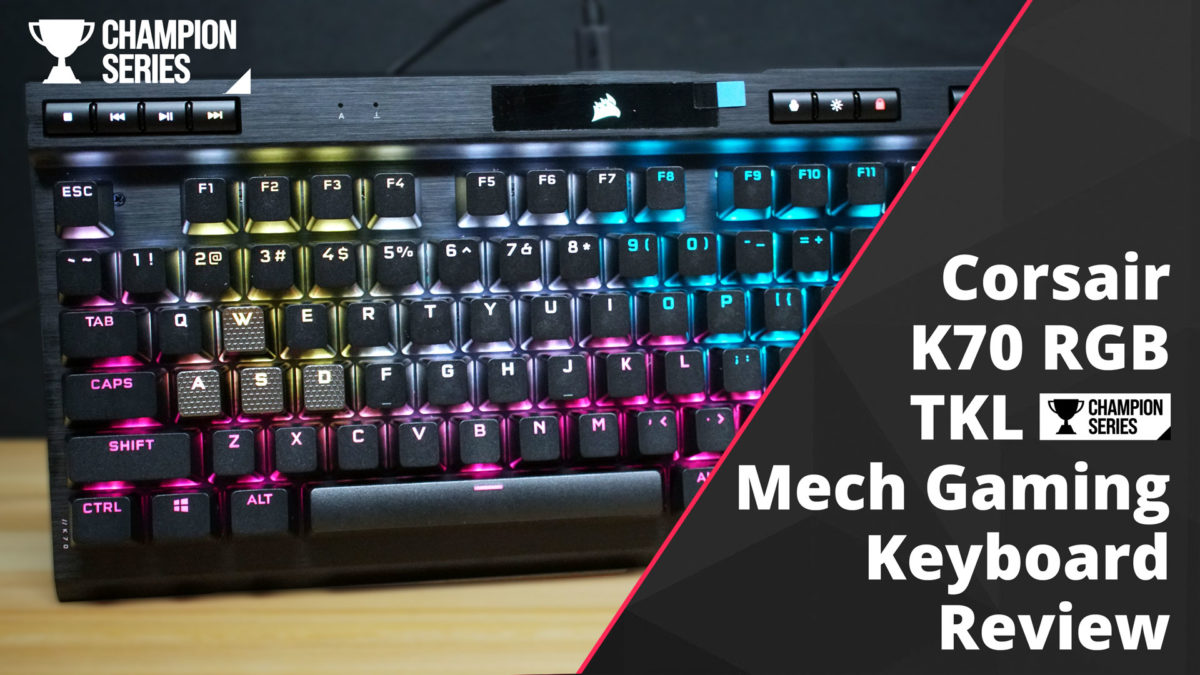