We’ve reached the point where performance gaming laptops have now permeated every facet of computing and they now serve far beyond the traditional gaming use thanks to both its performance and value offering. A lot of the laptops in this market have evolved from hulking behemoth to more traditionally lighter design. This is thanks to advancements in components to improve efficiency and decrease while delivering utmost performance. Less heat means the need for a larger cooling solution is gone so our laptops are now thinner and simpler. Modern laptops are also very powerful with top end models already sporting 8-cores but do you really need to go all the way? 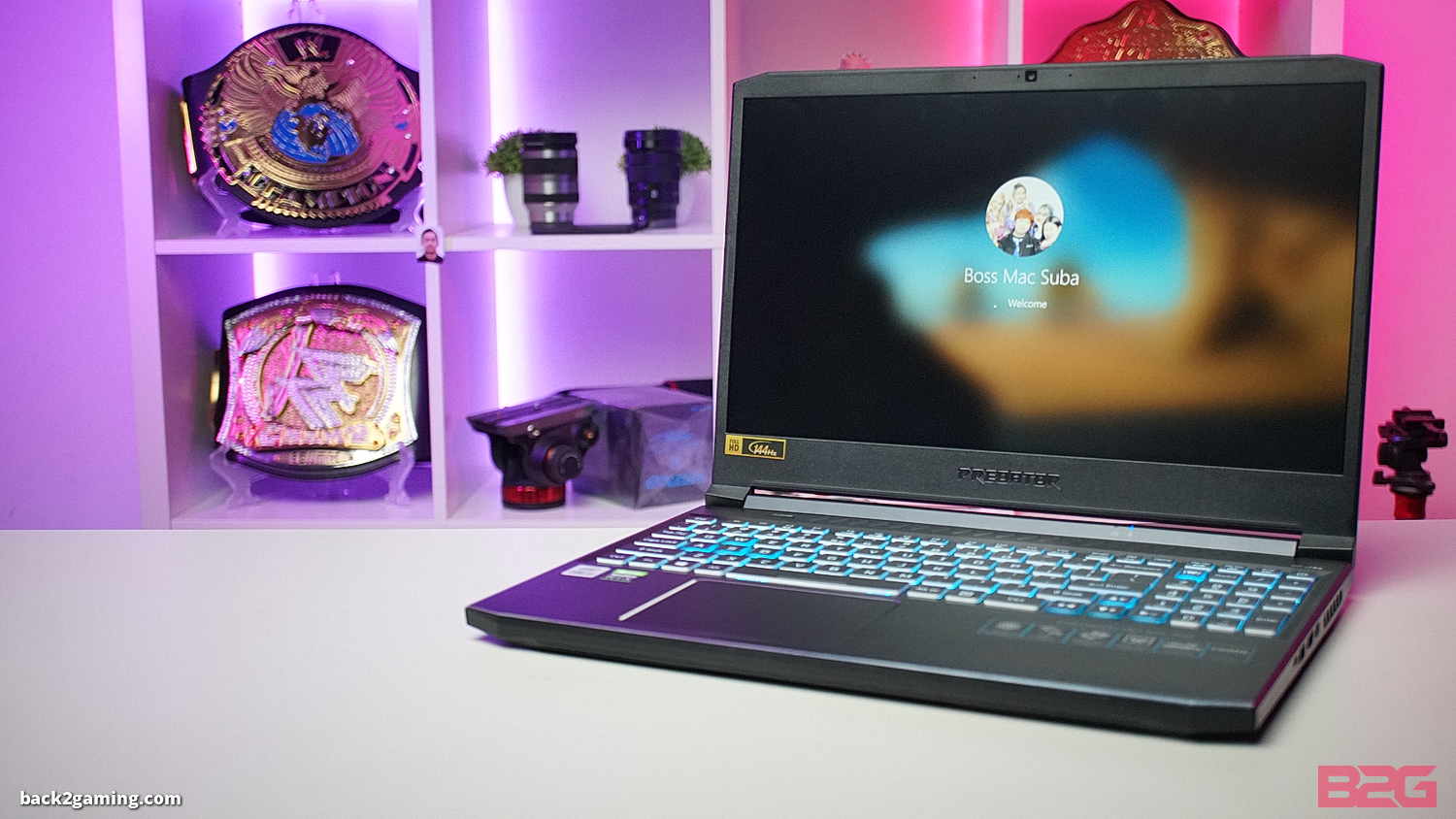 In this review we’ll take a look at an Intel Core i5-10300H-powered laptop, which was launched last year, and see if how it handles in real world content creation scenarios as well as gaming. Our review unit is the Acer Predator Helios 300 featuring Intel’s 10th-generation laptop CPU paired with an NVIDIA GeForce RTX 3060 laptop GPU which is a decent mobile combo that should offer a compelling value proposition for those looking to get a modern laptop that can serve both entertainment as well as work duties without breaking the bank. 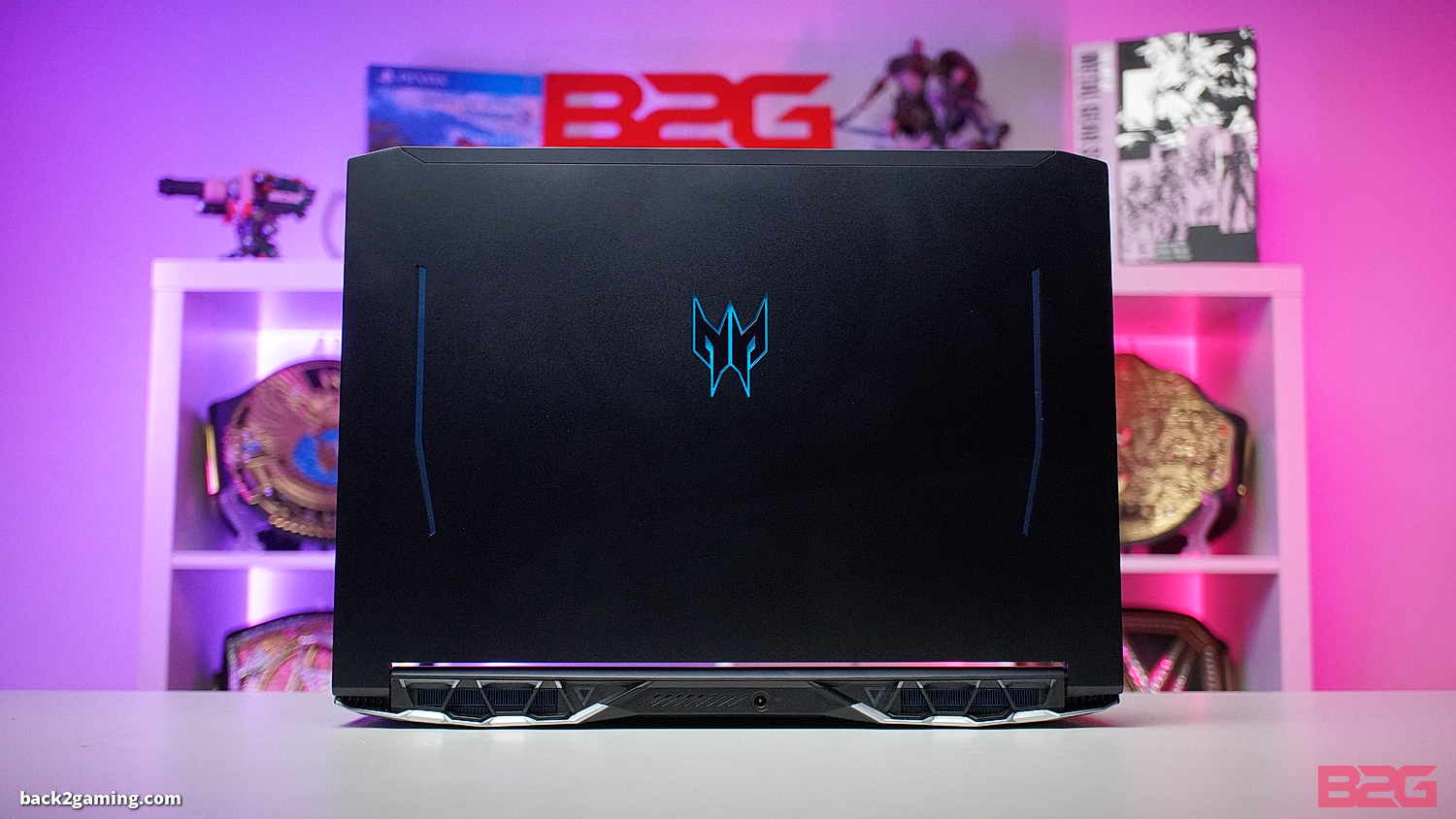 As a Predator laptop, the Helios 300 rendition this year follows the modern trend from Predator of a futuristic chassis with a cleaner design. It still features the large, light-up logo on the top cover with slits running on the top. Normally this would be the only metal part of the laptop but as we’ll see later, there’s more which is a very welcome choice. 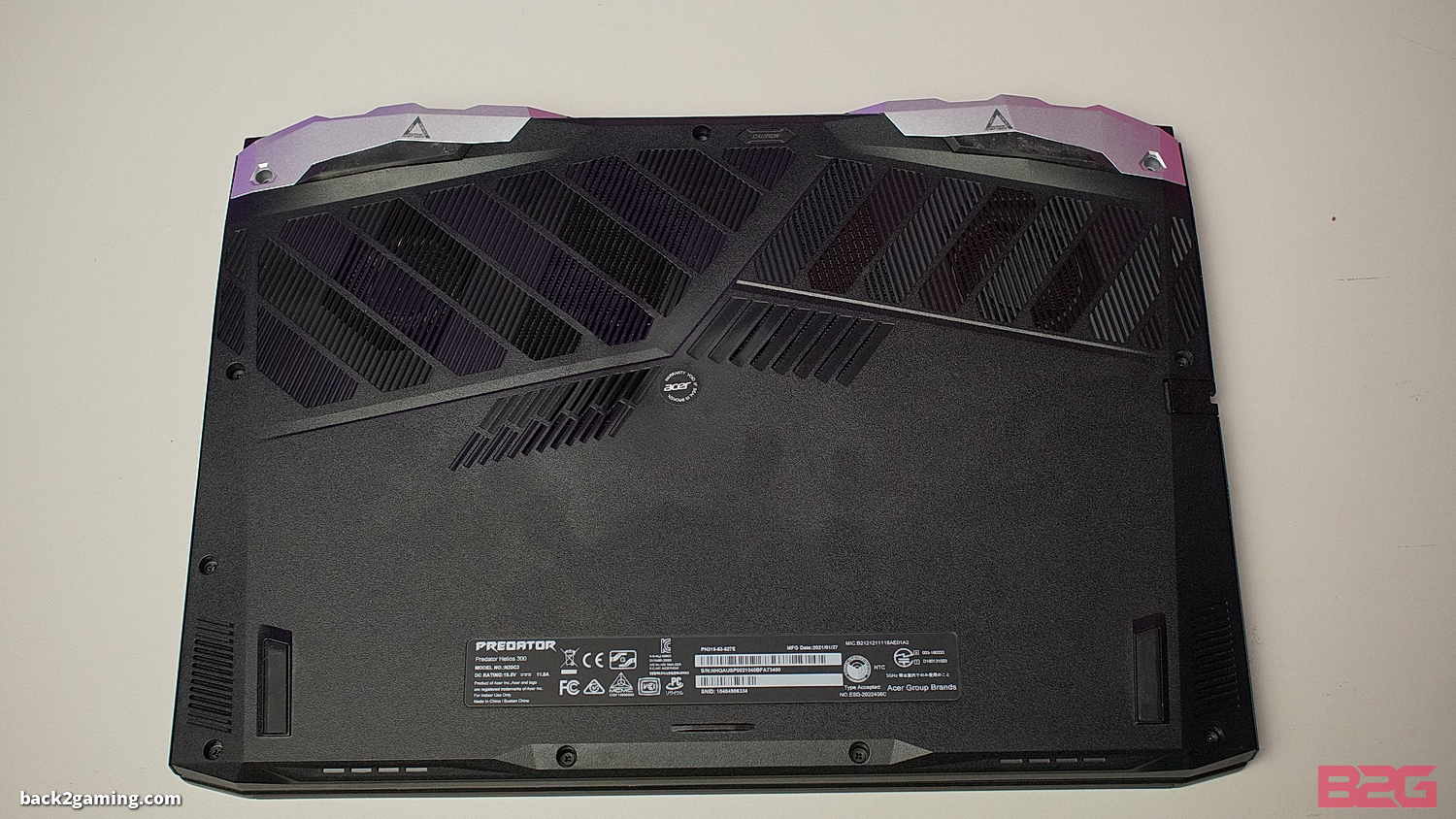 As laptops have now gone from user-serviceably to fully enclosed, we only see an intake area at the bottom of the Helios 300 that supplies fresh air to our CPU and GPU. The vents are stylized following the Predator theme and are well integrated and hides the fact that they’re giant vents.

Going through the sides we have the input arrays on this laptop starting on the left we have a physical LAN port powered off a Killer gigabit ethernet which is also supplying us with the WIFI. Going back to the side I/O we have two USB3.2 Gen1 (5Gbps) ports and an audio combo jack. Shifting to the other side we a USB-C port and another USB-A port. The USB-C supports charging and what I believe is USB3.2 Gen2 (10Gbps) but could be sharing bandwidth with the type-A port beside it. Lastly on the left I/O we have an HDMI port and a mini DisplayPort. 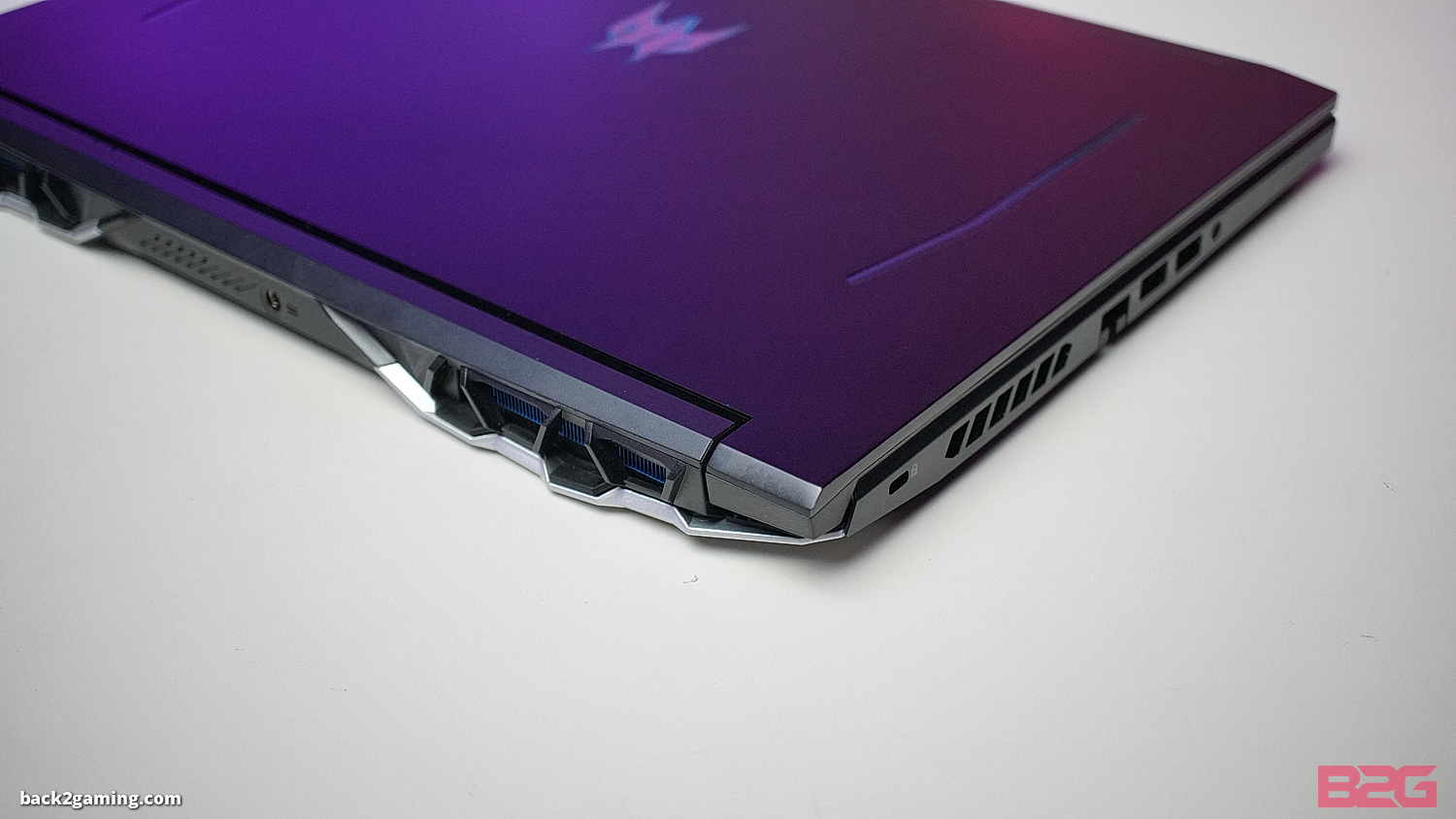 To keep thing clean, Predator has placed the DC port on the back which is something I always like seeing. Something I need to note as well is we have a Kensington lock notch on the top-left edge as well for added security. 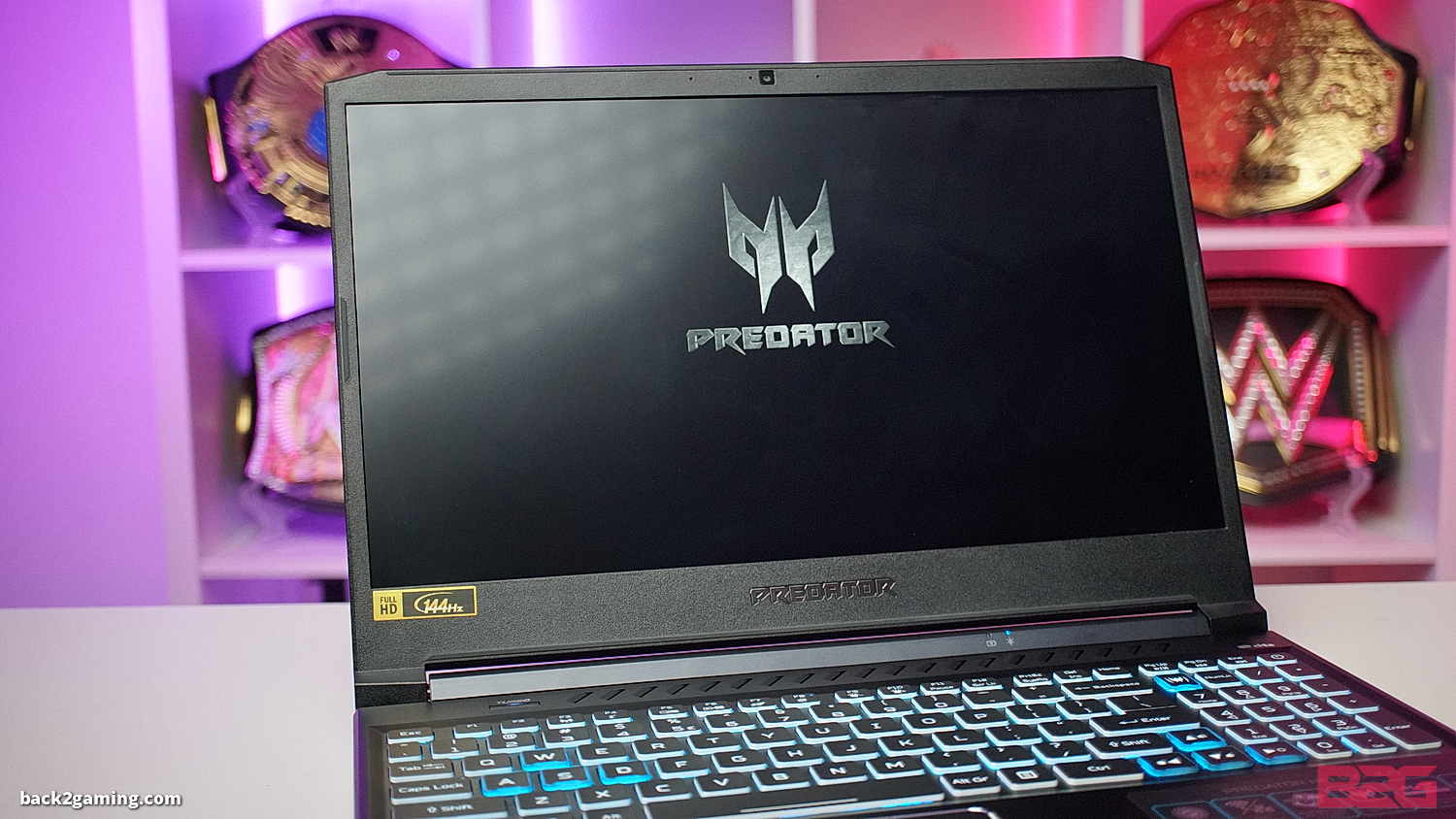 Opening up the laptop we now get the most “cyber” looking part of the Helios 300 thanks to its signature keyboard. 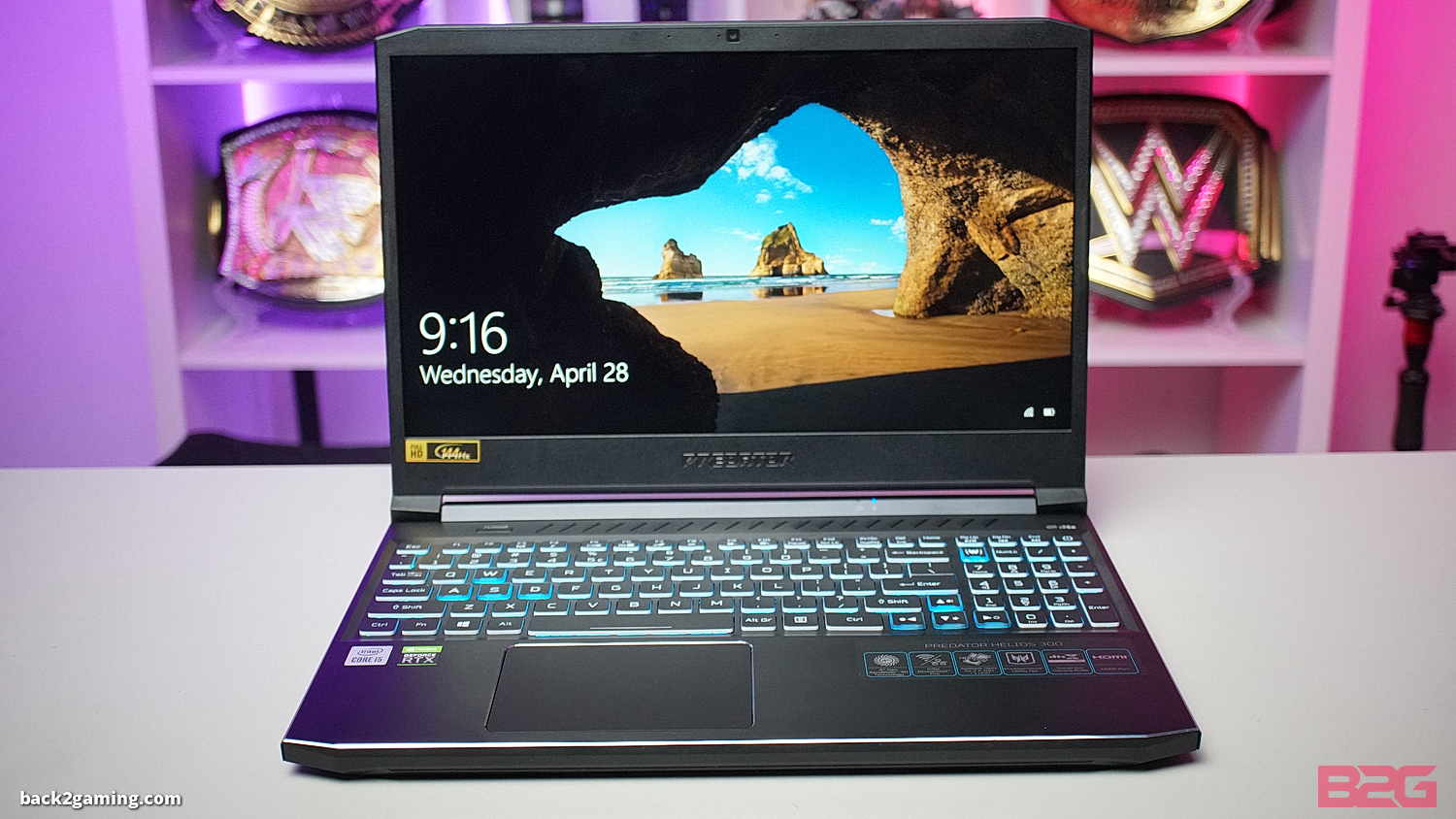 The screen on this particular SKU is a 144hz 1080p panel, you may check your preferred SKU if your local models support various other display options. There’s hefty chin on the screen which is common for this size. Bezels are chunky as well but this will be up to your personal preference. Last up is the webcam on top which is a 720p resolution webcam. 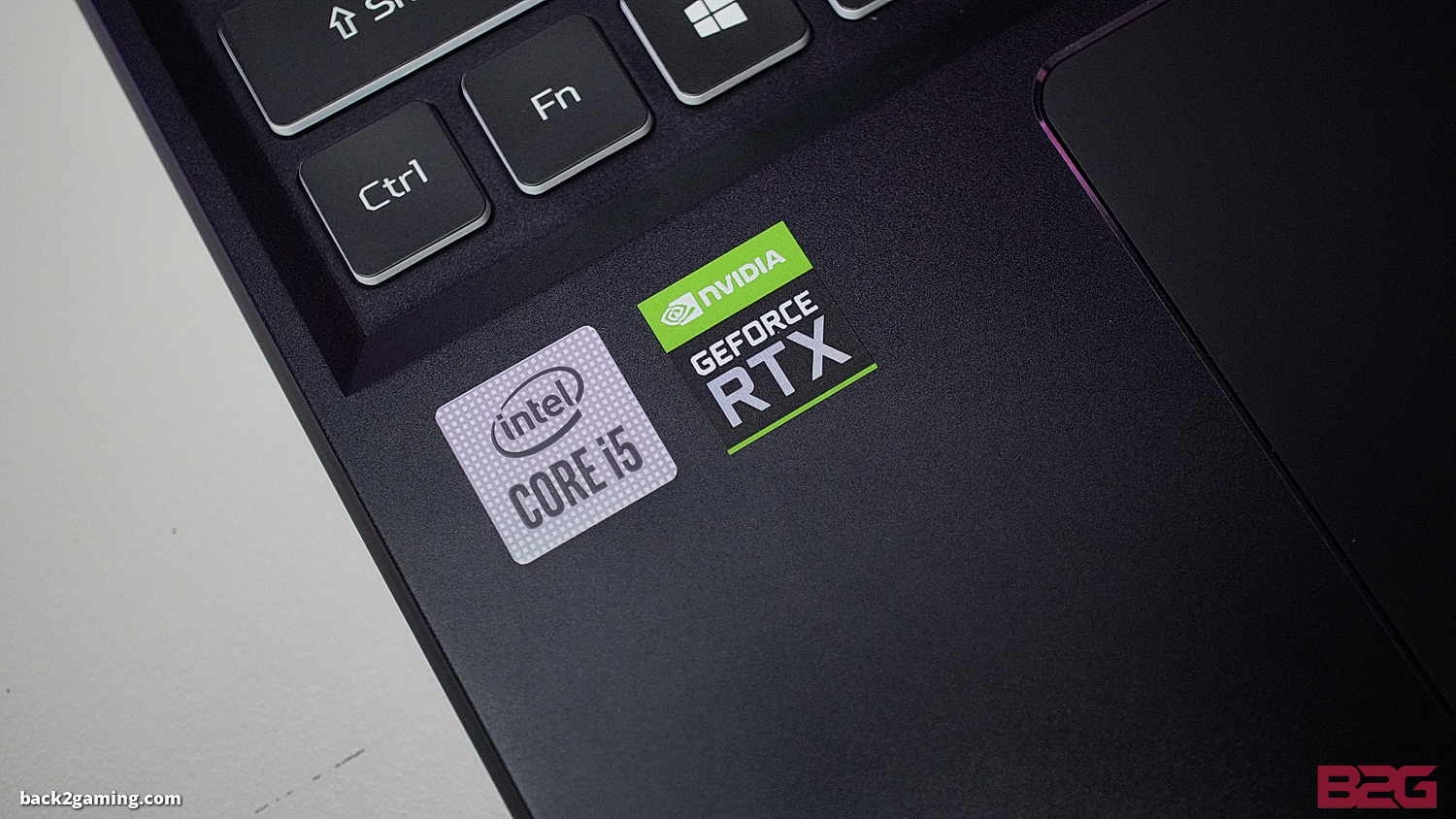 Another point that needs to be highlighted are the brand badges that tells us that this device is using a 10th-generation Intel Core i5 as well as an NVIDIA GeForce RTX graphics card. To be exact, our unit is the Helios 300 PH variant sporting an Intel Core i5-10300H 10th-gen 4-core/8-thread CPU and an RTX 3060 for laptop. We have 8GB of memory expandable up to 32GB and we have 256GB of SSD storage as well as 1TB hard drive. 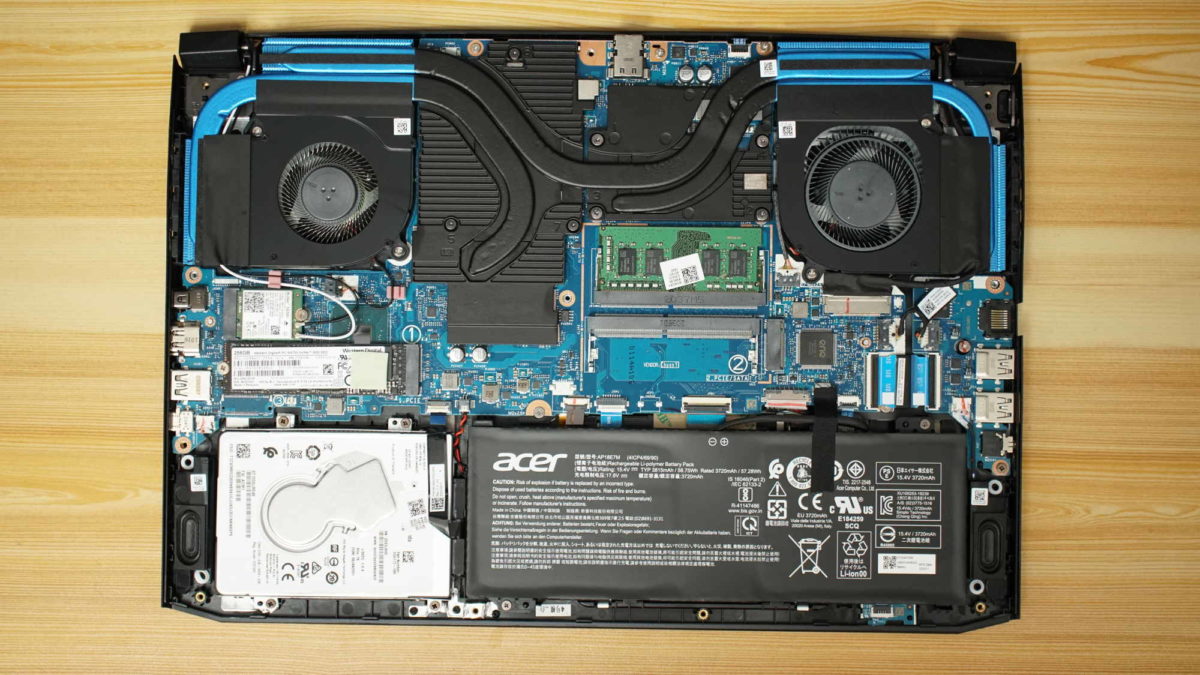 Here’s a shot of the internal where you can see we have some room to work with with M.2 slots and RAM slots open as well as ditching the hard drive to free up some weight. You may ask the store for your upgrade of choice to fit your needs.

Now with that out of the way let’s see some benchmarks. 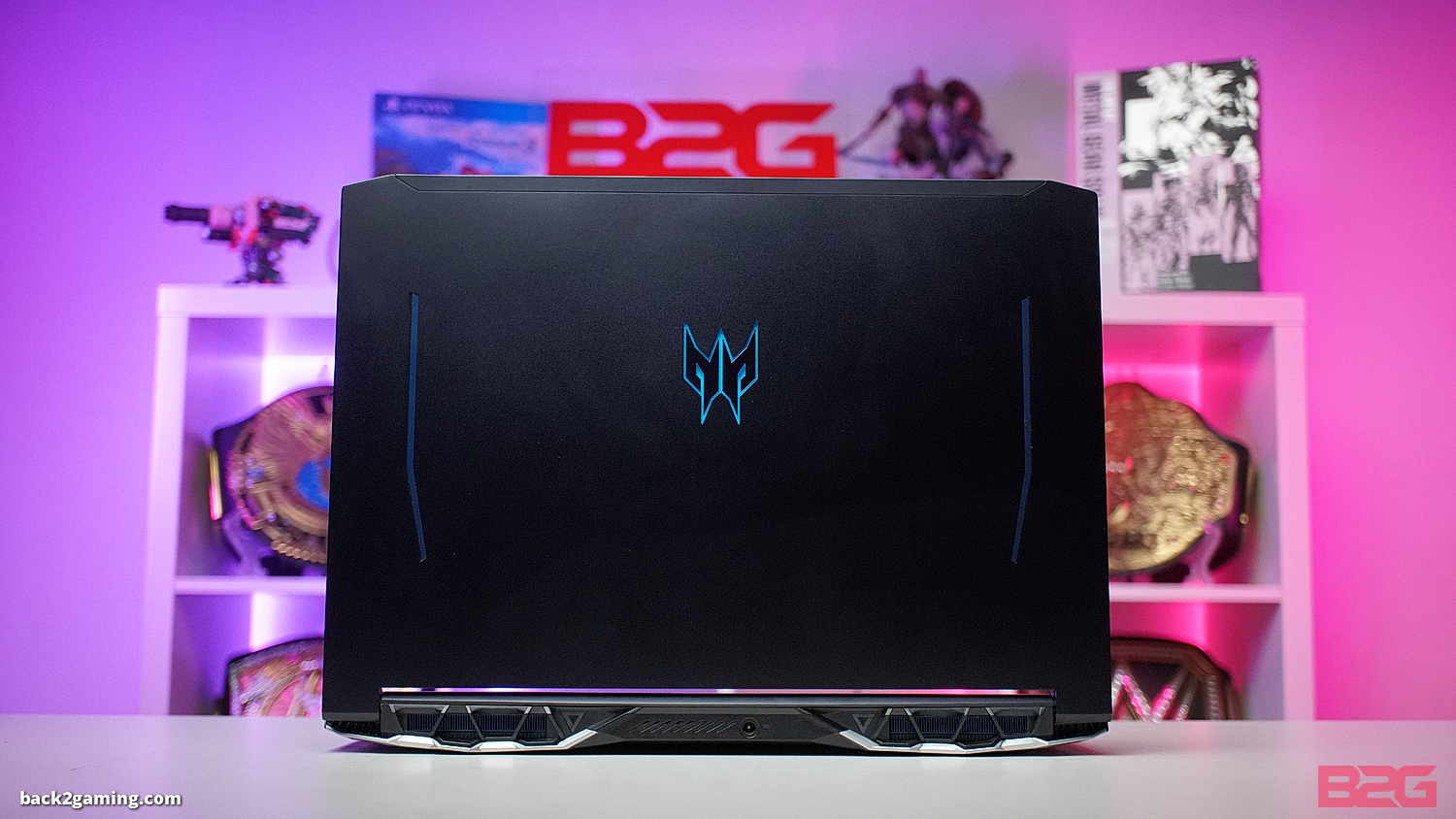 Before I begin, I need to set expectations right: the Helios 300 is perhaps the most mainstream-specced system I reviewed with the Intel Core i5-10300H but it fits perfectly with the RTX 3060. This should position it well for those looking for a gaming laptop first, and work laptop second. Still, it’s got some chops.

PCMark 10 Modern Office tests give us a score of 4904 on the Helios 300. This mixes a total use case from productivity applications to video conferencing as well as some games. To give context, 8-core CPUs would score around the 5000s but GPU does influence this benchmark a lot.

And for what its worth, those working with video content this laptop scores around 344 on PugetBenchmark for Premiere Pro. This benchmark is heavily influenced by RAM and upgrading could improve our scores as well in many other facets.

So with that out of the way let’s jump to gaming. As we’re working with a laptop, we’ll focus on the native resolution of 1080p in our gaming benchmark suite. 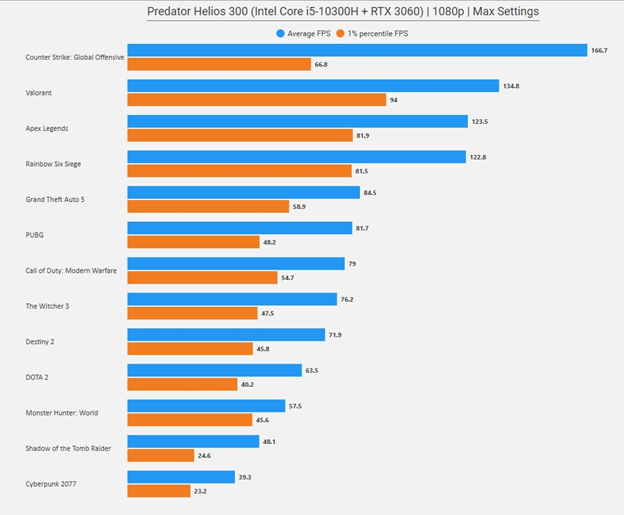 As expected, esports titles lead the pack with CSGO, easily the most CPU-restricted title we have, filling the 144hz panel with an average 166.7FPS. CSGO’s main rival and new favorite Valorant dips just a bit at 134FPS. Further esports titles like R6 and Apex all score well  in the 100FPS mark which should please FPS aficionados looking to meet that 144hz standard. Some of these games will, of course, allow tweaking settings so you can hit sweet that 144hz goal.

AAA titles are a different beast with the crowning glory of 2020, Cyberpunk 2077 easily the most challenging title we have. Aside from that, the current most-played titles amongst our games are relatively in the 60FPS mark and is open for further tweaking as the player desires.

Touching first on thermals, basing off our gaming benchmark numbers we see GPU temps at 76*C and the CPU at 74*C peak average. Predator has a Turbo fan mode which also boosts performance but will also set the fan at an audible speed. This does allow users to take advantage of the extra cooling allotted to us by the laptop and utilize it further to boost CPU and GPU performance. 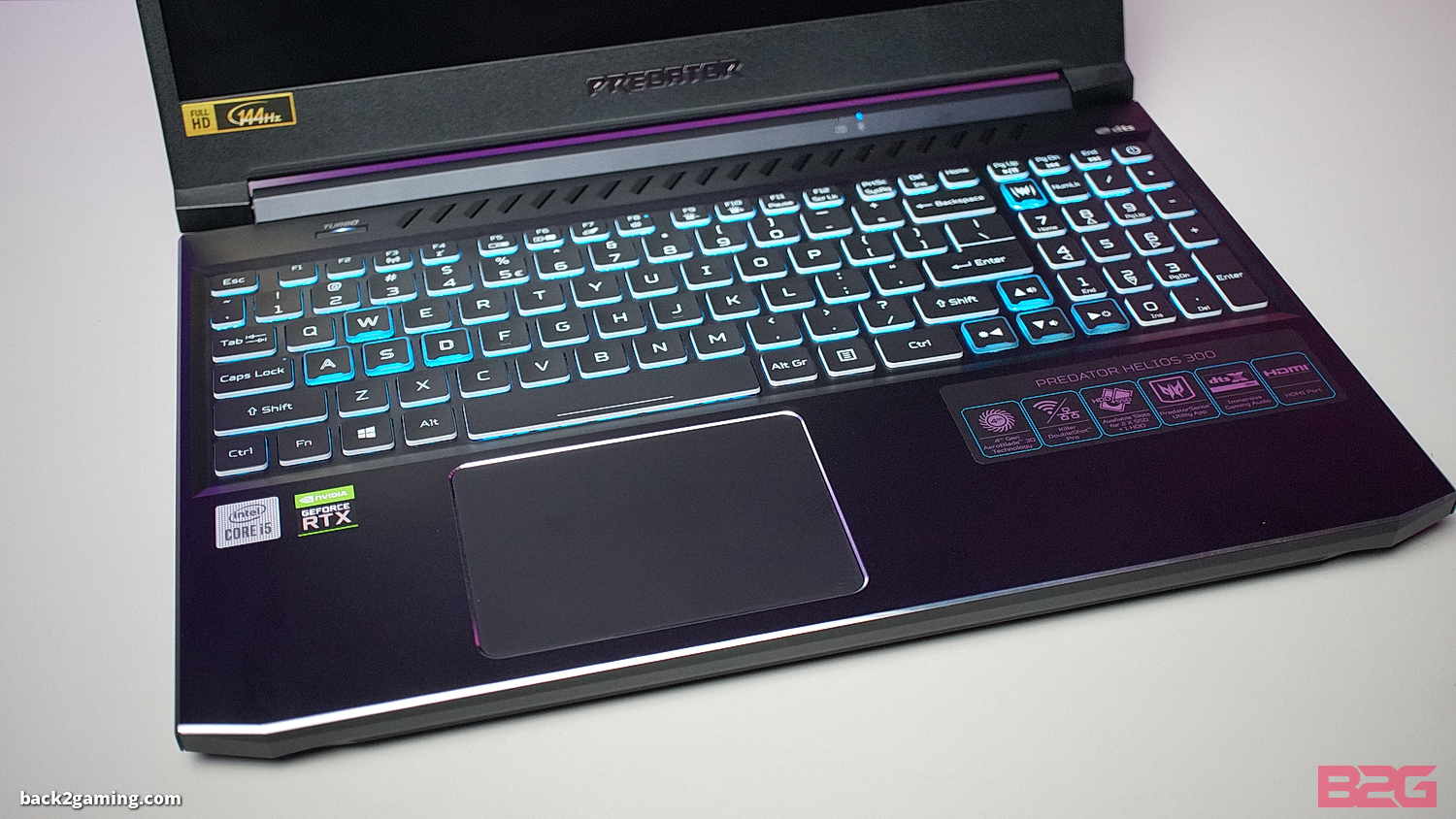 With that out of the way, another thing I have to touch on is screen quality. The Helios 300 display is decent and bright and color reproduction is quite good. This of course proves the great relationship of the 10th Gen Intel Core i5 with the RTX GPU. Great visual capacity uncompromised because of the powerful CPU.

This works well for both work and play as well as just watching some movies which I have to stress is also a good experience on this laptop thanks to the excellent speakers that Acer has installed on the Predator 300.

I have to say though that out the box, the Helios 300 does not exhibit that it can actually do RGB and you have to go into Predator Sense to configure your keyboard if you do prefer to go RGB. The ice blue default lighting is my personal preference but users would want to know these things. The start-up audio tends to get loud as well and with no option on start to tweak the sound other than disabling it altogether, this is a missed opportunity in retaining the branding. Last nitpick is probably the position of the keyboard but if you use a mouse, its really not a deal breaker. For those asking, the keyboard is firm and nicely spaced. Keys have decent travel and the actuation feels responsive and the experience is close to the clacky side. 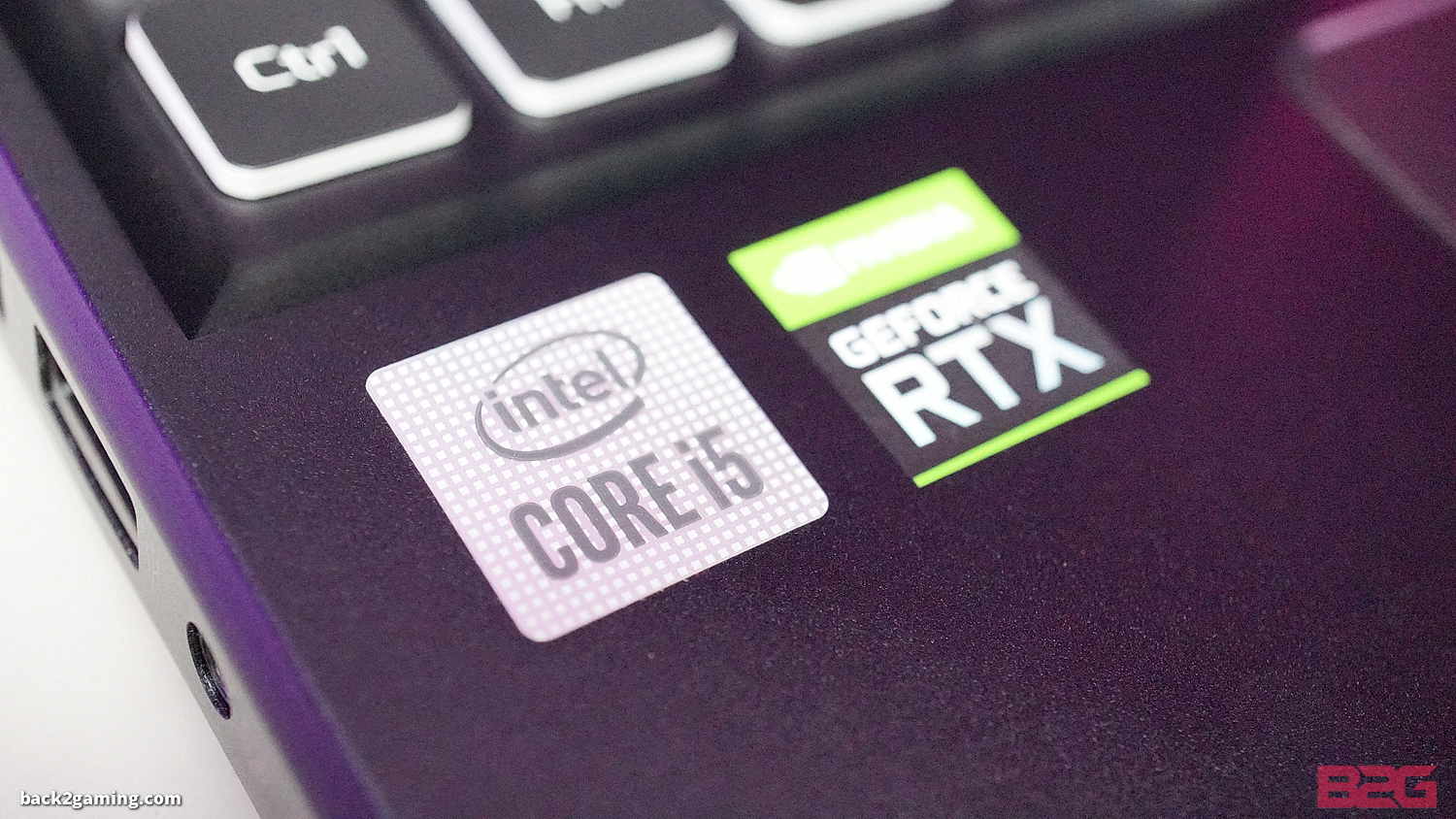 Going into actual usecases, as we are all now have transitioned to either a mobile workforce or remote schooling, and with computers now the main window to the world rather than our escape from it, maintaining that mix of “good for work but nice for gaming” is something a lot of us need especially during this pandemic. While gaming laptops have always held a premium, premium performance itself has become more and more accessible. With the Intel Core i5-10300H complimenting the RTX 3060 laptop GPU, this combo offers a good starting point for those that want a decent foundation for a multi-purpose laptop that could do a little bit of anything. I can easily recommend the Predator Helios 300 but if you’re feeling the futuristic vibes, there are plenty more Intel-powered laptops out there that runs with the latest NVIDIA RTX GPUs but as it is, the 10th Gen Intel Core i5-10300H being a one generation-behind CPU, is still a winner with the Predator Helios 300.

This Predator Helios 300 is priced at Php74,999 and available at Acer Concept stores and authorized dealers nationwide. You can also checkout 10th Gen Intel Core-powered gaming laptops with RTX 30 such as MSI and Gigabyte.