by BossMac Suba
in Power Supplies
Reading Time: 4 mins read
A A
0 FSP has been slowly gaining recognition as a very reliable power supply maker and being the manufacturer of their platforms, this has some perks for FSP including lower cost. FSP has invited us before to tour their factory and the company touts a very decent testing facility. Fast-forward a couple of years and FSP now easily have good mindshare amongst PC builders.

FSP’s Hydro series PSUs is a weird naming convention for me as I’ve always thought it as being associated with liquid cooling, which the original Hydro PTM+ technically was as it is liquid cooled. Despite that, FSP ran with the name which has spawned the entire Hydro family of PSUs. From the Hydro PTM+ all thew way now to the Hydro GT Pro. The Hydro GT Pro has an MSRP of $139 for 1000w and $119 for 850w. Regional pricing applies. Speak to your favorite dealer or local distributor for more details on local pricing.

The FSP Hydro GT Pro is packaged in a full colored box. A hero shot of the product is shown in front, in a much more brilliant background than older models, I might add. The main box cover shows some key features including the 80 PLUS Gold rating of this power supply as its 7 year warranty. The capacity is highlighted as well. The Hydro GT Pro is available in both 1000w and 850W capacities.

FSP ships the package with a foam lining covering the PSU and the contents. Inside, the cables are tucked on the right. Inside the package is the Hydro GT Pro PSU, the modular cables, documentation, velcro straps, screws for your case and a PSU jumper connector for testing.

As indicated above, you get a semi-modular PSU on the Hydro GT Pro with the layout as below:

Take note that one of the PCIe connectors is actually shorter and one of them is hardwired.

The Hydro GT Pro is a 150×150 square and should fit most chassis that support traditional ATX PSUs. Due to the modular nature of the connectors, you’re still reminded to keep a few centimeters allowance for the cable connectors.

Both hardwired and modular cables are flat, ribbon-style and are done in black. The included jumper is usedd to connect the the 24-pin to power up the PSU by itself. This can be useful for doing initial testing, troubleshooting as well as cycling water in a watercooling loop.

In this purely non-scientific test, we load up a system powered by the Hydro GT Pro in various loading using a mix of CPU+GPU loads to see the readings from our Passmark PSU tester. The numbers in read are just a bit out of spec but nothing to be alarmed about.

The real test here is can it endure our high-end system and sustain enough juice and the answer is yes. I did do a dual GPU test to make sure it is stable and I’m happy to report that it did pass with flying colors.

With an RTX 3090 and a 12900K, even the 850W capacity Hydro GT Pro could power the system but the 1000W capacity should bring you close to the higher efficiency curve. Regardless, under load its fairly quiet. All in all, as a semi-modular power supply, it serves as good foundation for starter builds that may be looking to grow over time. With a 7-year warranty, FSP is very confident in this power supply and the 80 PLUS Gold rating backs that up with decent efficiency.

For its price of $139, the 1000W is a bridge model for those that are looking to build a high-end system but want to keep it grounded without the bling of top-shelf PSUs. What the FSP Hydro GT Pro brings to the table is practicality along with dependability.

If you’re looking to build a basic mid-range system but want a PSU that’s ready to grow with you, the FSP Hydro GT Pro is an easy recommendation for its value. Its a power supply that says you value your system but still saves you a buck or two.

FSP backs  the Hydro GT Pro with a 7-year warranty. I give it my B2G Recommended Seal! 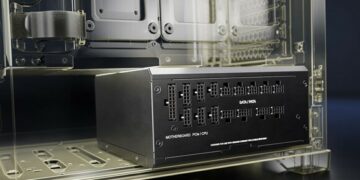 PSN - a Must-Have for Gamers

Thinking for a Change: 6 Courses that Could Help You Change Your Career