NVIDIA has announced their RTX 3080 exactly 24 hours ago as of this writing and for that are following the RTX 30 series launch, this will be one of the most intense launch periods in the history of PC with NVIDIA, AMD, Sony and Microsoft all having releases at the same time period. Its an interesting time, no doubt, but all eyes are on NVIDIA as today they finally and officially launch the RTX 3080. Unlike previous launches, the RTX 3080 will have custom models available on launch day and with that comes one of the most diverse release library in the past 10 years in the GPU segment. With NVIDIA speaheading the custom RTX 30 series cards with their compact RTX 3080 Founders Edition (full review here), brand partners are challenged to step up their game but there’s a glaring contrast between NVIDIA’s card and partner cards as you have noticed… most partner cards are huge 2.5x slot cards.

We’ve already looked at the Founders Edition and also a reference PCB. In this review we’ll explore one of the first custom cards for the RTX 3080 in our lab, the ASUS TUF GAMING RTX 3080 OC. A 2.7x slot design featuring a wider PCB and emblazoned with ASUS’ brand new TUF GAMING branding, swapping in the Caterpillar Black/Yellow for the their new Black/Grey color scheme as well as a new logo for TUF GAMING.

The TUF GAMING line of graphics card have only been in the market as of last year and its been a bumpy ride since then and for the most part, its still finding its footing in the graphics card space. The ROG Strix has been the flag bearer for ASUS’s VGA line up and the DUAL and the more obscure Phoenix line-up rounds up the rest with the occasional mainline ROG product appearing as halo product but brings with it radical new features that will never make it to mainstream or eventually become the new mainstream. Going back to the ASUS TUF GAMING cards, the previous designs were utilitarian, being bulky, hulking masses of metal wrapped with a blocky plastic shroud. I’ve always seen the TUF GAMING graphics cards are purely pedestrian. But that changes today. 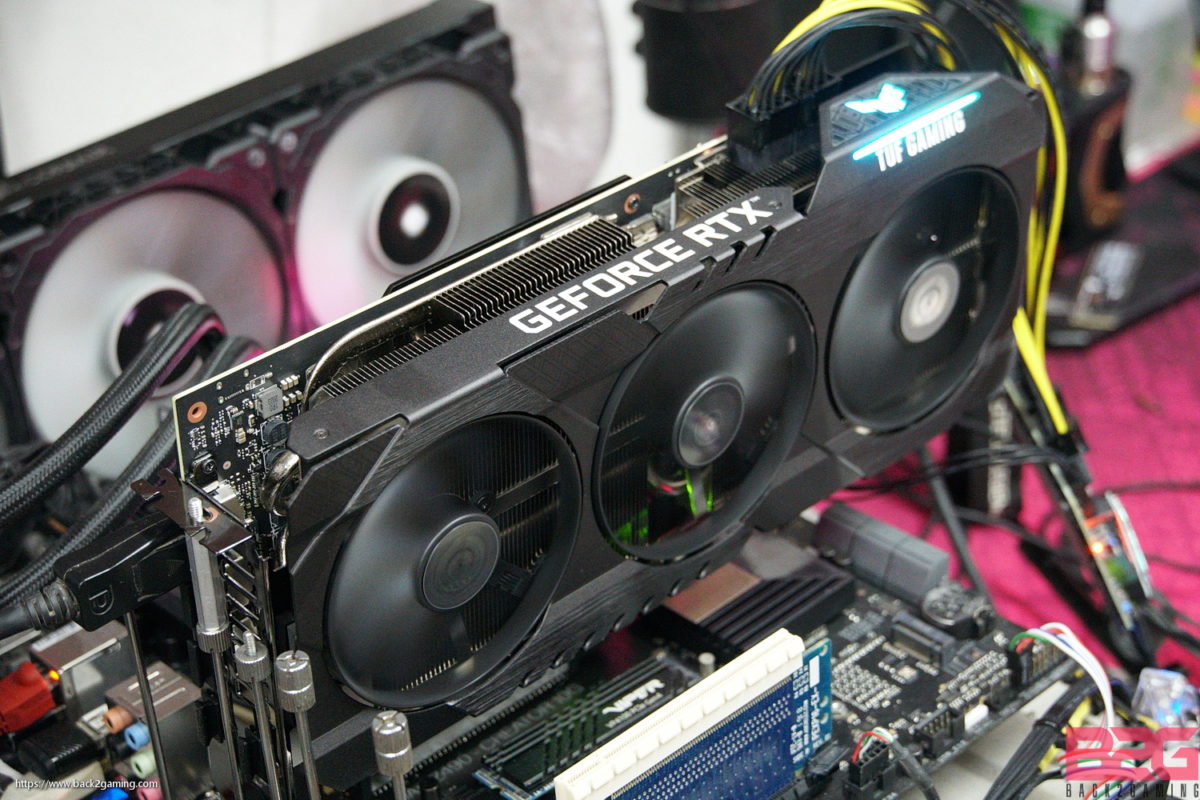 The ASUS TUF GAMING RTX 3080 debuts the new TUF GAMING coolers from ASUS which brings with the tried and tested Axial-tech fans, which cools down a resdesigned and more please-to-the-eye metal shroud that closely wraps the ornate heatsink which fuses a larger heatsink together with a dedicated VRAM heatsink. The TUF GAMING cooler features Max Contact tech from ASUS, technically just super fine surface area for maximum contact between the GPU die and the heatsink. Think of it as a perfectly lapped surface.

The new TUF cooler and the new TUF GAMING logo design. There’s still traces of the old TUF GAMING shroud here but its a totally difference make with nearly no more plastic remaining on the shroud and the shroud itself is made of metal giving a heftier and solid feel to this card. 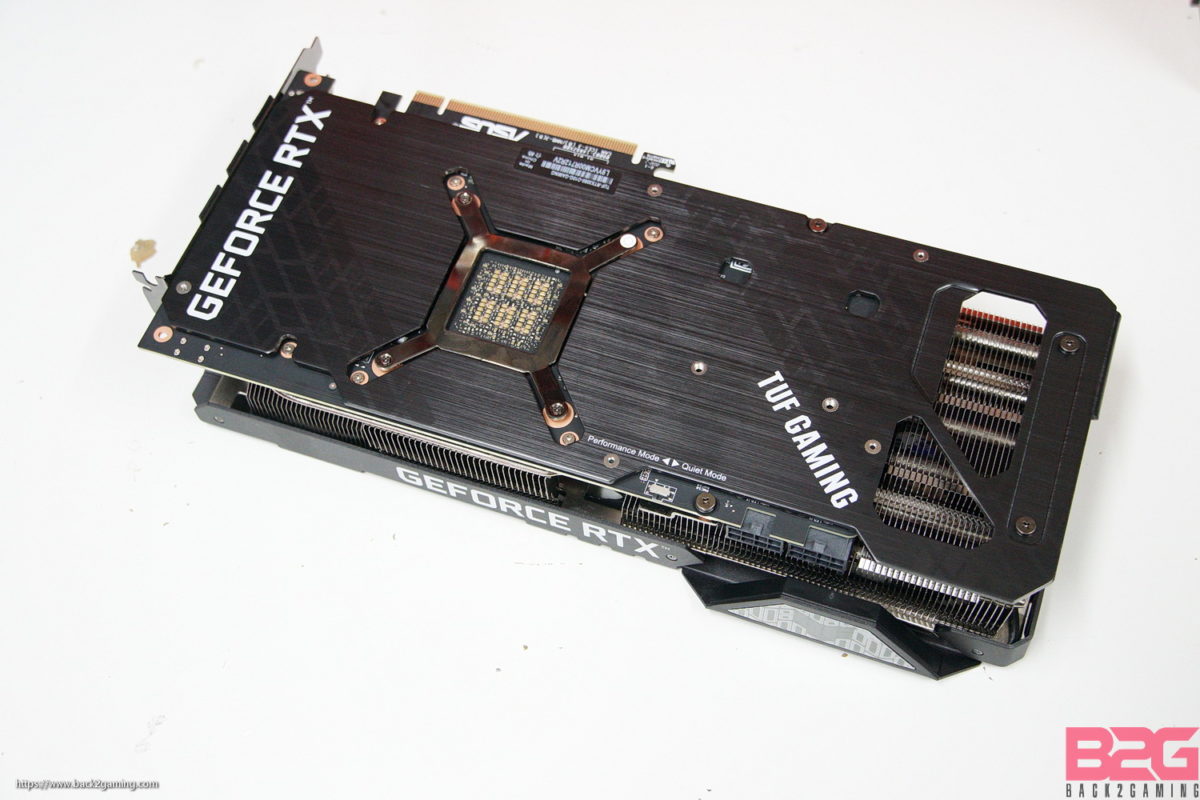 This card is a hair short of 12 inches in length and around 5 1/2 inch wide. The custom PCB allows ASUS to go with a stylized backplate which shows us the rear of the GPU die. The backplate itself is industrial-looking making it fit right in with current-gen TUF GAMING products. 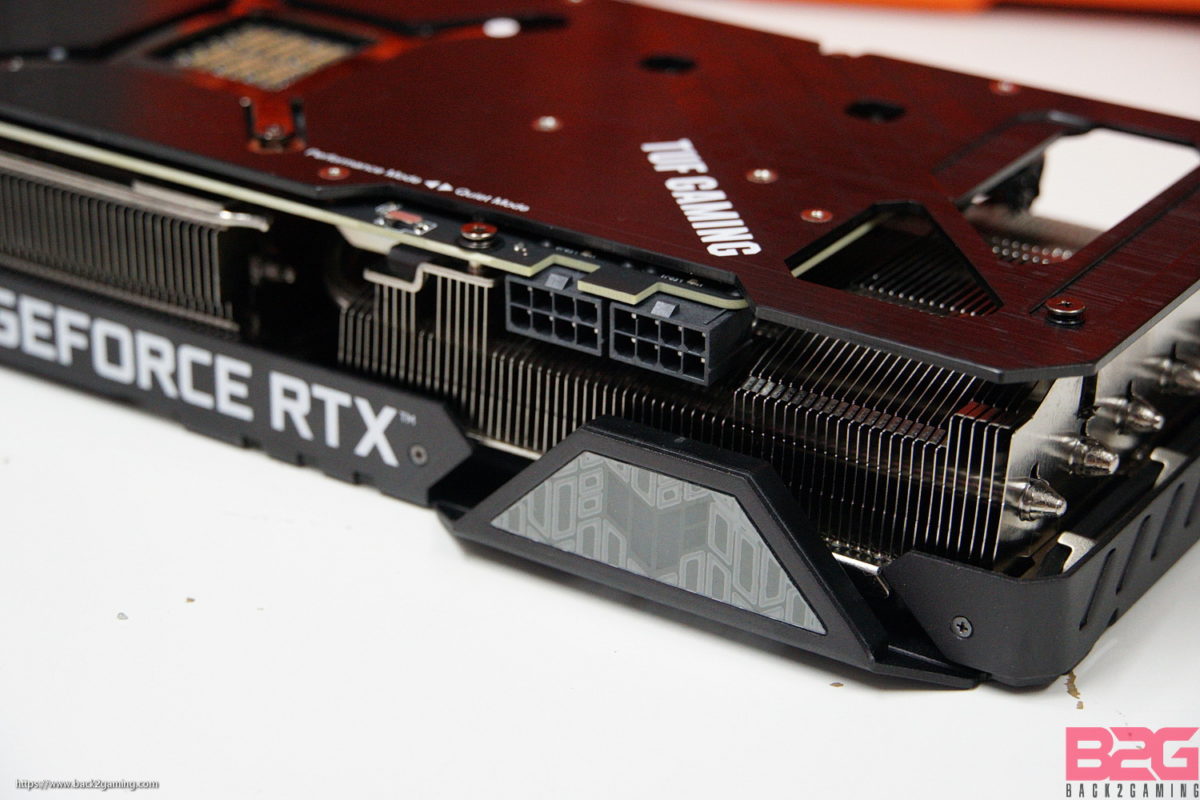 The card is power by two 8-pin connector. Also in the photove above is the RGB logo for the TUF GAMING series and it extends outwards from the heatsink. It adds barely half-an-inch to the shroud but allow me to nitpick for a bit and say that this logo addition is needless and ruins the rather flush side on this part of the card. Its totally unnecessary and the branding work could use more thought.