With NVIDIA’s GTX 10-series, AIB partners have been a bit more conservative in releasing SKUs and curiously, we haven’t seen heavily overclocked models that break past NVIDIA’s guideliness for their GPUs and that’s exactly the barrier that’s limiting the GPUs in the 10-series: NVIDIA has dominantly handed card manufacturers strict guidelines in creating custom cards so its not surprising we’re not seeing any ROG, Lightining, etc. in the market right now. That being said, this does provide the opportunity for brands to fully maximize their current designs and in today’s review we take a look at another ASUS ROG Strix GPU, with the ASUS ROG Strix GTX 1060 graphics card. As many have noticed, ASUS has definitely ran with this design, having most of the GPUs this generation fitted with their ROG Strix cooler. Read on to find out more about the ASUS ROG Strix GTX 1060 in this review!

With the immense success of the GTX 1080 and GTX 1070 Pascal GPUs from NVIDIA, it seemed they would hold on to their midrange cards a bit longer but in a relatively bold move, they’ve announced their GTX 1060 midrange GPU hot off the heels of their high-end launch. The GTX 1060 is squarely placed in the center of the mainstream market and is directly being compared to the GTX 980 but with greater efficiency, temperatures and overall performance. That being said, NVIDIA does cut this card back a bit and we’ll take a look at a couple of the cards that came out fresh off GTX 1060 announcement. 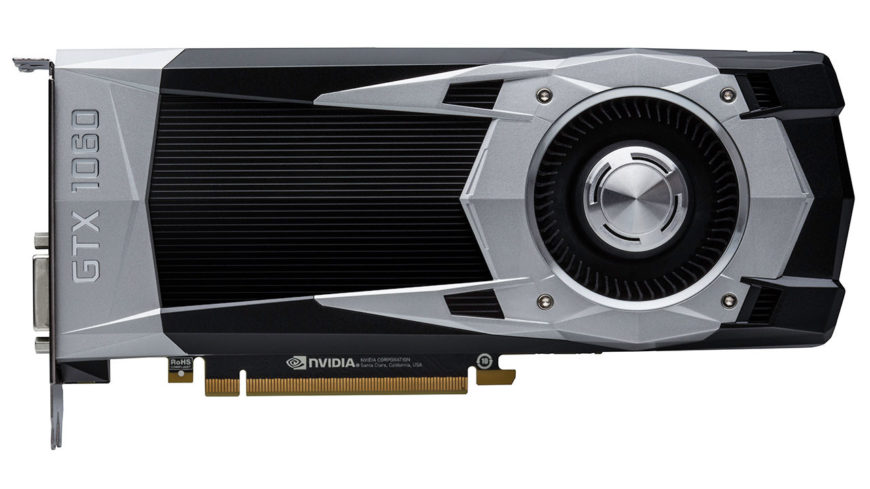 The GTX 1060 is based on the same Pascal architecture as the GTX 1080 and GTX 1070 but utilizes a newer GP106 GPU on the same 16nm FinFET process. All the Pascal features are also in this card with the GTX 1060 utilizing 1280 CUDA cores running with a base clock of 1506Mhz and can boost up to 1708Mhz. Memory runs at 8Ghz and is wired to a 192-bit bus with a total of 6GB. A 3GB variant is also available but that is a different specsheet altogether.

The GTX 1060 6GB requires a single 6-pin power connector and has no SLI support.

ASUS has promoted the Strix branding to become a daughter-series to the primary flagship line-up of Republic of Gamers (ROG) products and will serve as the mainstream brand for ASUS’ gaming oriented offerings. The ASUS ROG Strix implements a couple of new features to its cooler merging a high-end feature set with the more mainstream line-up from ASUS. The ROG Strix models currently sport a large dual-slot, triple-fan cooler with RGB trim highlights that are fully LED illuminated together a full-backplate with the ROG logo also RGB-LED illuminated.

The ASUS ROG Strix GTX 1060 comes in a regular variant and a factory-overclocked model with the OC designation. Our sample for today is the OC version which comes with an out-of-box GPU frequency of 1620Mhz and a boost frequency of 1847Mhz. Users can optionally set a higher OC mode frequency on top of their factory-OC via the ASUS GPU Tweak software to get a higher 1873Mhz boost clock and a 1645Mhz GPU clock. Memory on the OC variant comes at 8208Mhz.

The games and corresponding image quality settings used are shown below:

Note: Some proprietary technologies of NVIDIA like PCSS, HBAO+, and HairWorks work on AMD GPU’s but we decided not to use them. 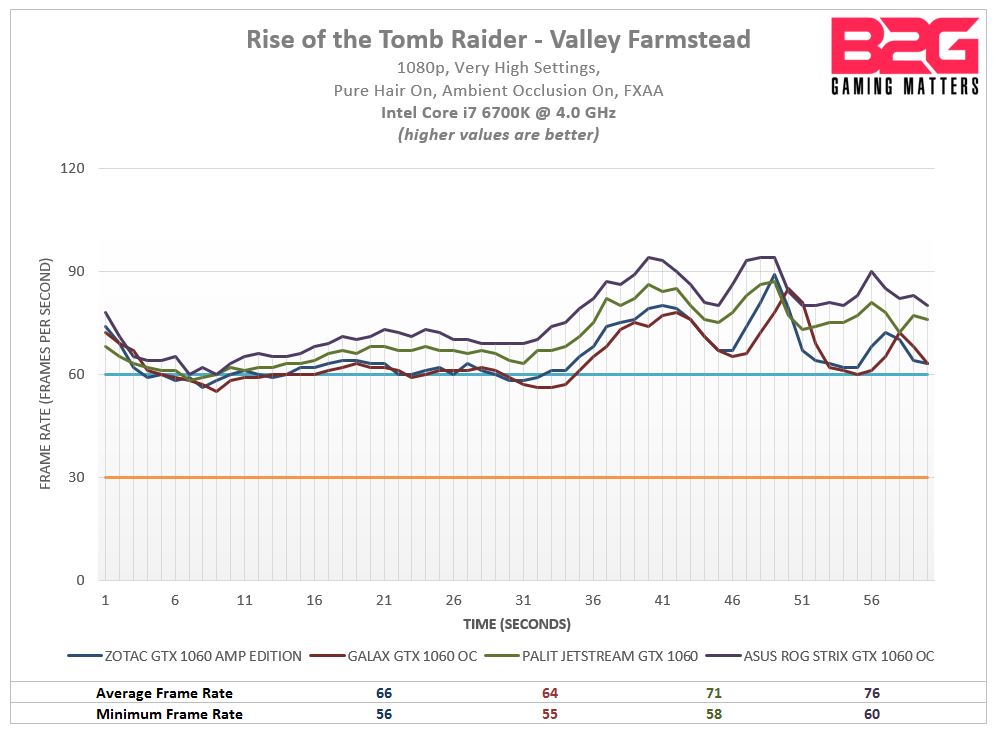 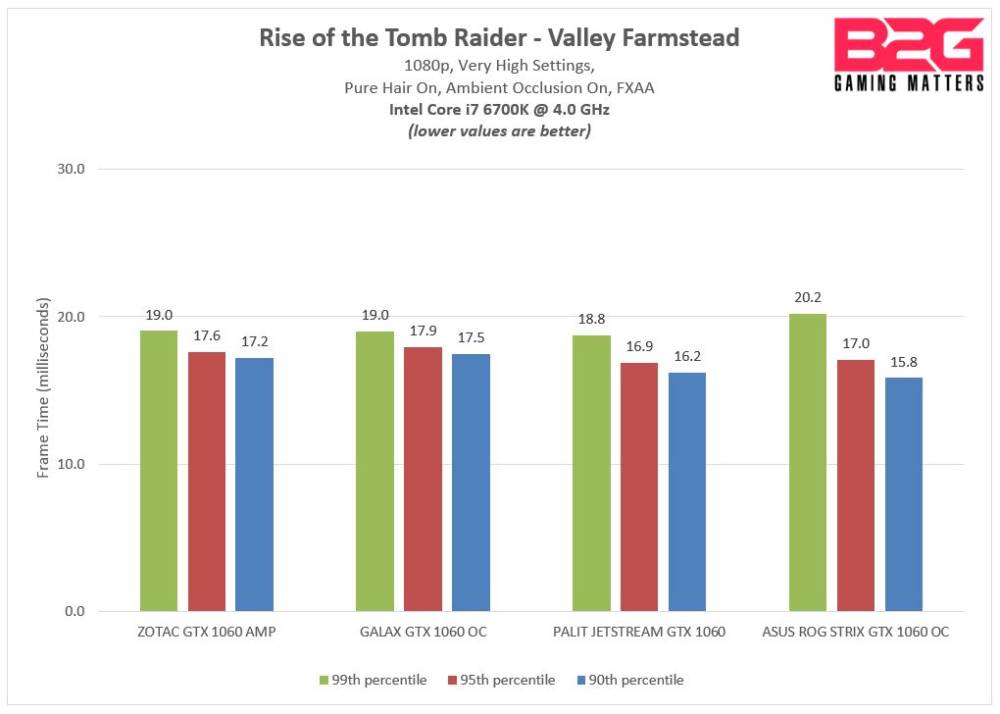 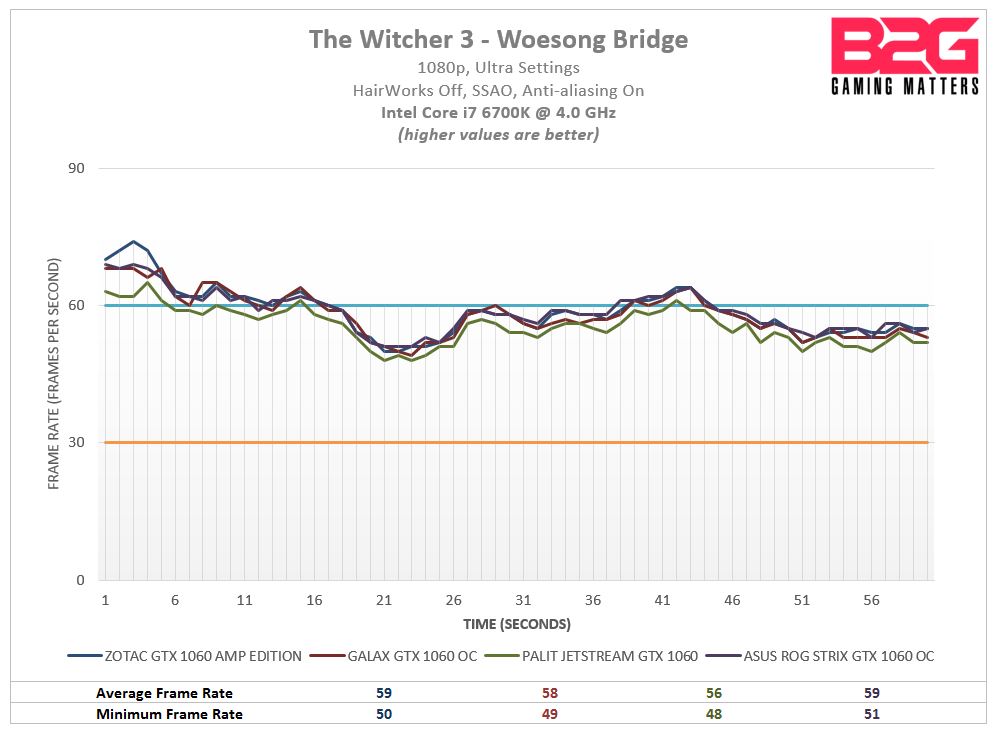 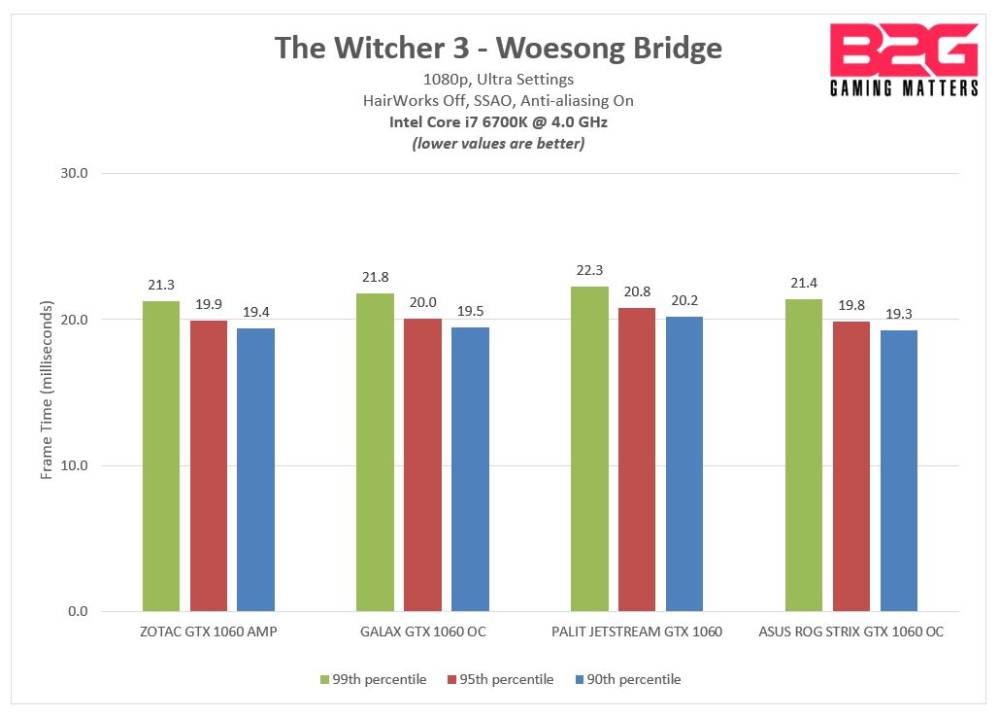 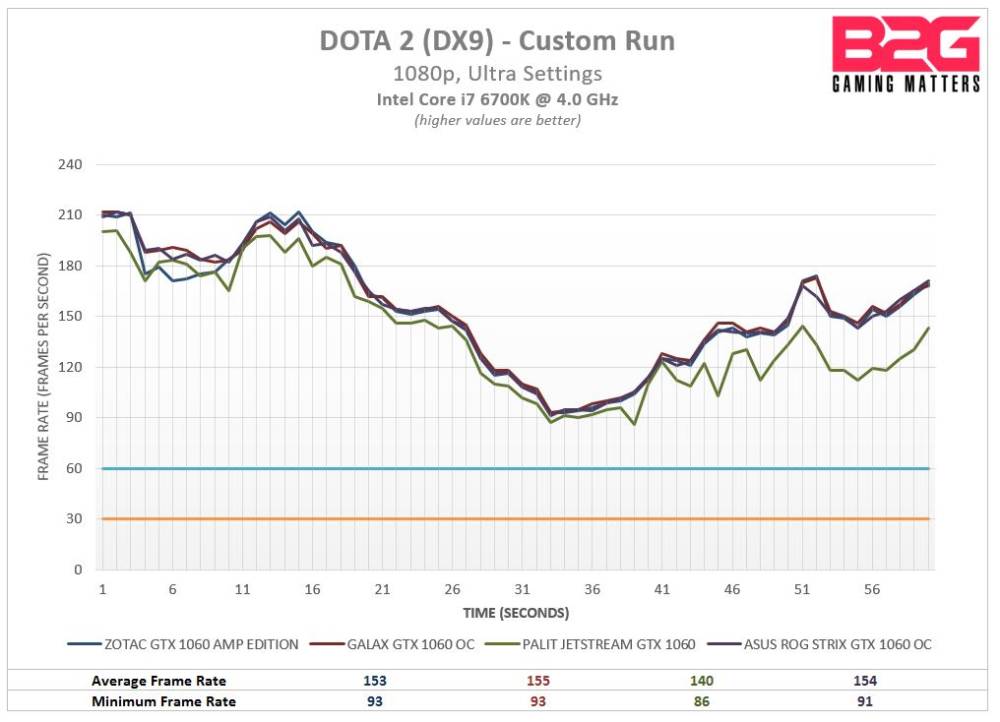 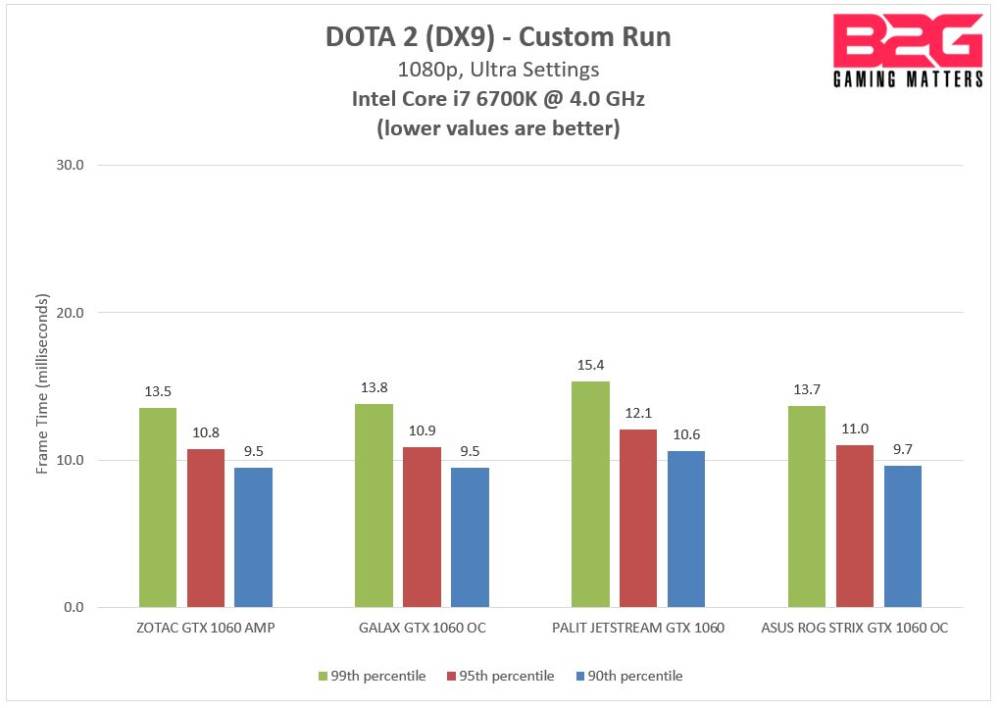 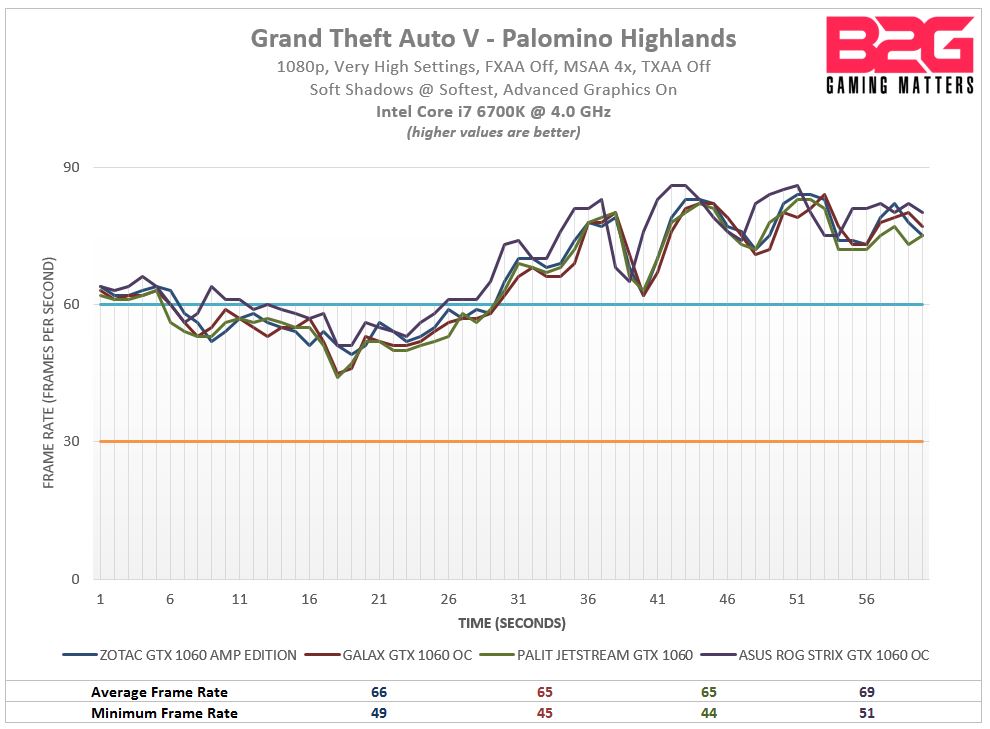 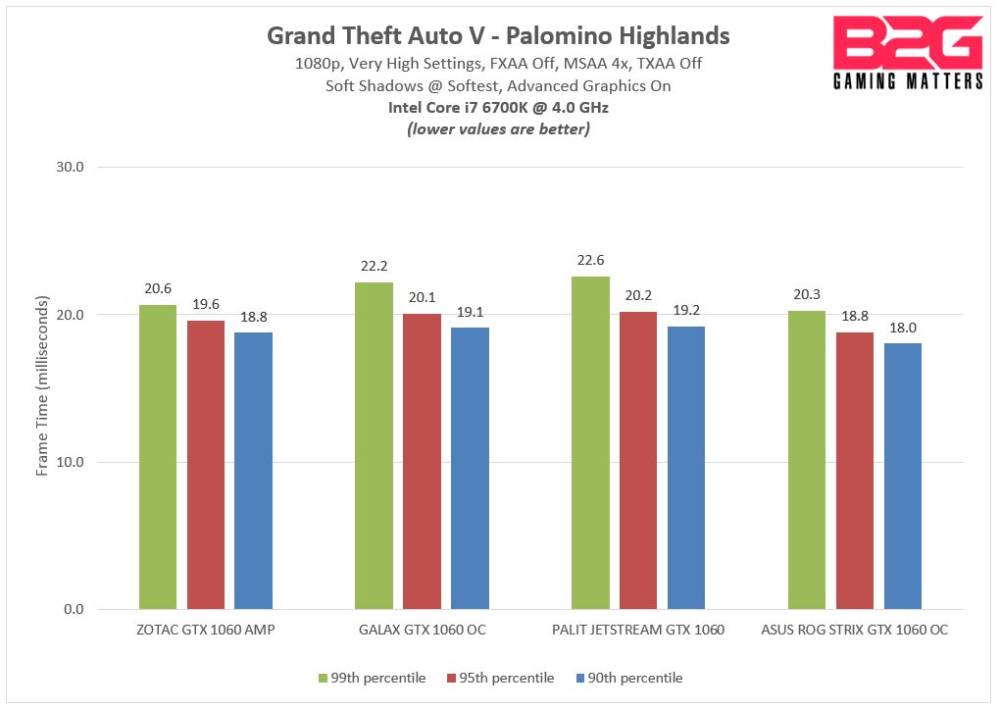 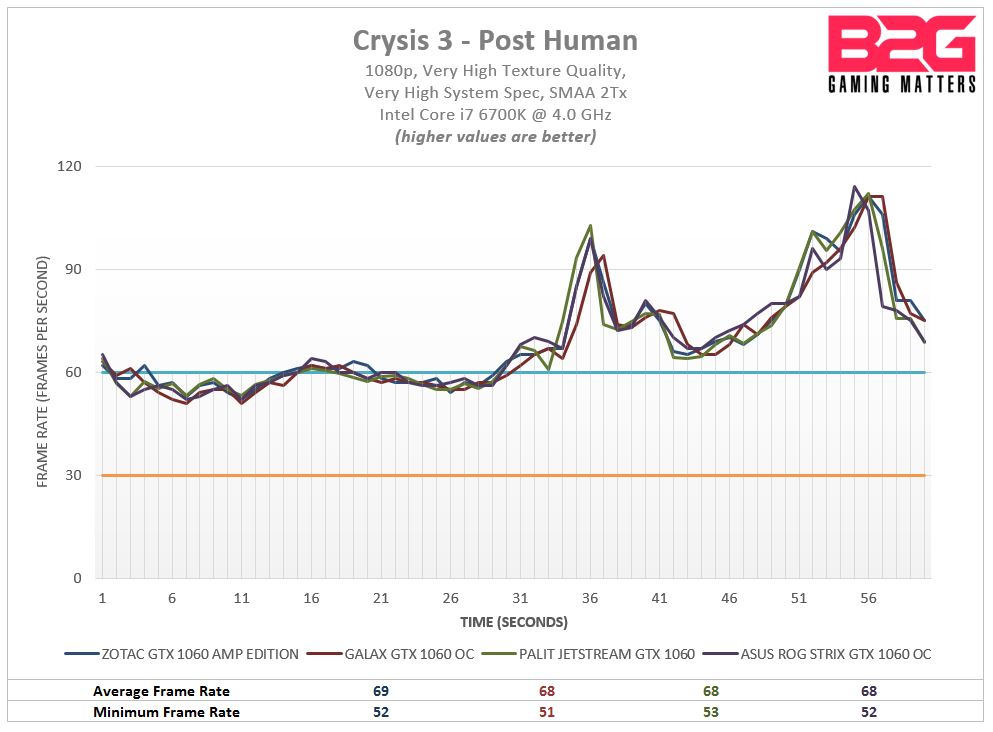 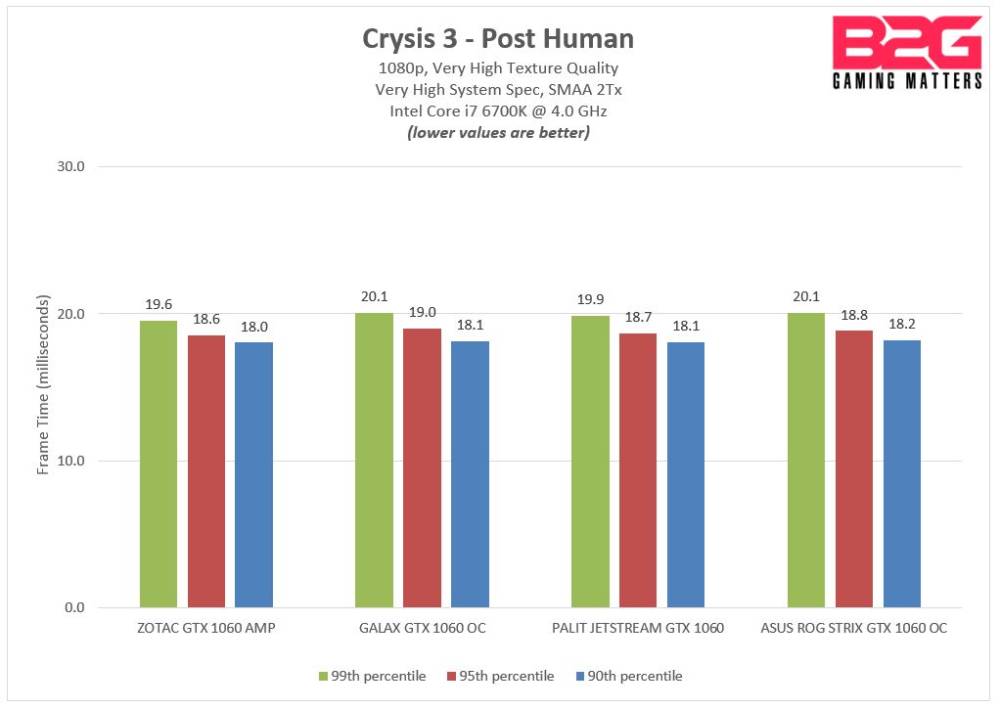 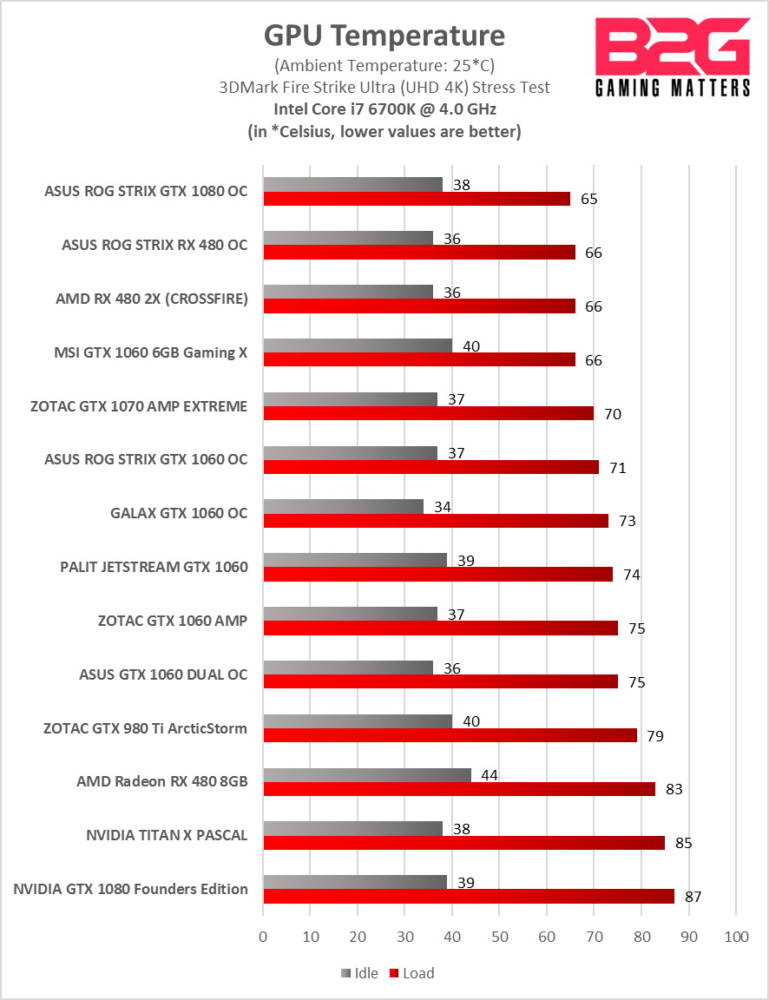 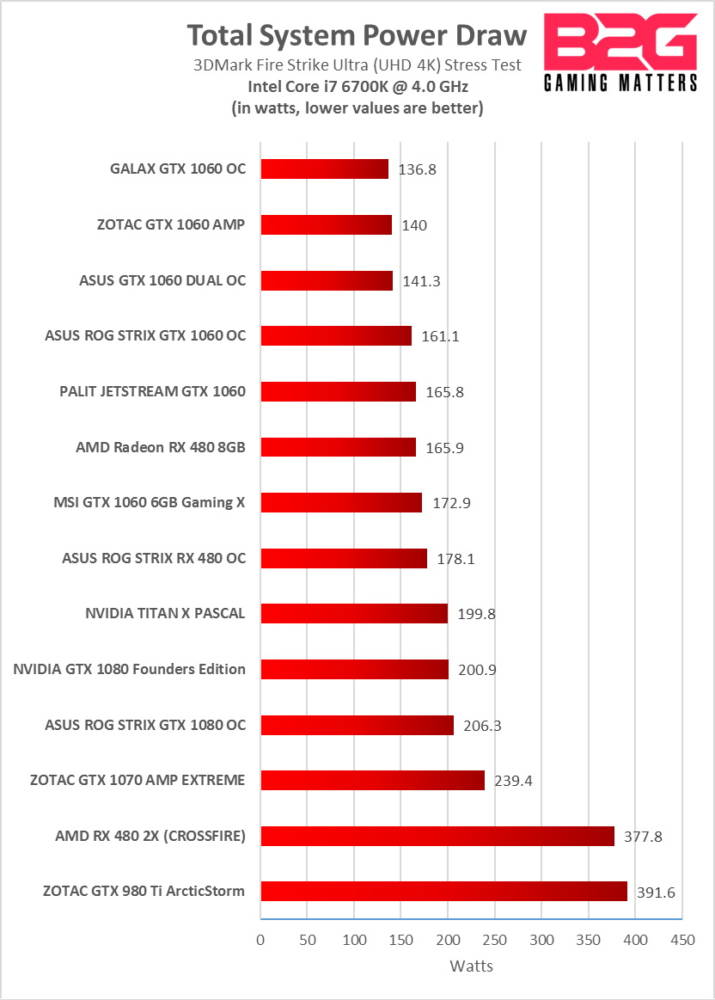 As with most Pascal cards, the GTX 1060 has a very high efficiency rating making it cooler than most cards and draws less power in general.

In the charts above you’ll notice the GTX 1080 actually being relatively cooler than the GTX 1060 on the ROG Strix implementation. This is because the ROG Strix cooler doesn’t spin until it breaks past 63*C or so unless you manually set it. With the GTX 1080, we noticed the card reaches its fan threshold easier so the fans start spinning immediately. With the GTX 1060, the card is a bit more relaxed and will relatively reach threshold and then spin down again. In terms of power consumption, the card does sip a bit more power but still relatively on the good side of things versus other cards.

Let’s break down the verdict:

Performance. The GTX 1060 is a mid-range card and offers the performance that NVIDIA thinks sits well within the current mainstream market. It delivers very decent 1080p performance and if you could settle for lower graphic details, it looks like it can do 1440p easily as well in some lighter games. The GTX 1060 does lack the ability to scale its performance having no support for SLI. In terms of performance, we’re looking at very tight numbers so we’ll let those numbers speak for themselves.

Build Quality. Enhanced with ASUS’ improved engineering and component technology, the ASUS ROG Strix GTX 1060 is an excellent card made to the finest standards and delivers well in terms of cooling, feature and performance.

Functionality. The GTX 1060 is squarely aimed at 1080p gaming and while it can also do VR or higher resolutions, its lack of SLI support means its meant to be a single card solution for people that want a high-performance GPU for relatively mainstream gaming: eSport titles as well as MMORPGs, etc. should sit right with the GTX 1060 together with the obviously decent performance in modern games at 1080p.

Bundle. Check with the brand regularly during purchase to see what promotion they are running. NVIDIA also may have promos ongoing. As of this moment, no promotion is active.

Value. The ASUS ROG STRIX GTX 1060 OC is seen with current street prices of around Php16,200. Its main rival is the GIGABYTE XTREME and the MSI GAMING series models. Surprisingly, the ASUS ROG STRIX ends up a bit cheaper than the MSI variant in some stores. Overall, the ROG Strix GTX 1060 inherits all of the features that its ROG Strix GPU brother has which means we get uniform feature sets from the high-end to the mainstream card.

The NVIDIA GTX 1060 is intended to be the successor of the GTX 980. NVIDIA intently markets it as such but with only a 120w power draw. That kind of efficiency as well performance and price make it a no-brainer for anyone still thinking about getting a GTX 970 or GTX 980 when prices drop to reconsider as the GTX 1060 will easily squash those cards, not to mention possible heavily overclocked models. As with most Pascal cards right now though, prices vary heavily per region and that could still sway some users to opt for other options.

ASUS backs the ROG Strix GTX 1060 with a 3-year warranty. We give our B2G Performance Award and B2G Silver Award!