Price / Where to Buy

It’s that time once again where we see the new waves of motherboard come in droves to usher in the new era of processors and its going to be a heated a year for AMD and Intel as they both set the stage for their new products. Ultimately, AMD is set to release a new product altogether but for Intel, they will be focusing on refining and optimizing their process this time around with the introduction of the new 14nm processor. While the processors have been known for a good while now, the desktop offerings have just been announced today and coinciding with that launch is the Intel 200-series chipset that will support the full-range of new 7th-generation Kaby (rhymes with baby) Lake processors.

In the lab today we have something new for this side of the planet with the appearance of a motherboard from SuperMicro. Now for anyone not familiar, SuperMicro is more known for their server motherboards but for today we will be taking a look at their consumer entry motherboard featuring the Z270 chipset from their maistream market line, SuperO. The SuperMicro SuperO C7Z270-CG is one of the high-end model from this series which features support for a lot of modern feature trends but what we’re really interested is the quality of the board which SuperMicro is well known for and that’s superb stability.

Read on to find out more about the SuperMicro SUperO C7Z270-CG!

Intel’s Kaby Lake processors were already announced last year and introduced us to Intel’s new 14nm+ manufacturing technology which is said to improve on efficiency and performance on the existing 14nm process. The earlier Kaby Lake processors which came out were intended for low-powered applications which saw notebooks and other mobile platforms inheriting the new processors first. Today we get to see the products aimed for desktop consumers with the launch of Intel’s 200-series chipset and the new Kaby Lake desktop processors don’t distance themselves from their initial launch counterparts as they are still built on the same 14nm+ process. Intel’s touted improved fine profile and transistor channel strain are capable of providing a more stable platform to deliver more performance via the higher clock rates that the Kaby Lake processors tout than their previous Skylake counterpart.

One of the more important addition to Kaby Lake is support for Intel Optane technology which is essentially technology which allows systems that support it to utilize high-density memory that offers superior improvements over NAND. The 3D Xpoint deseign also utilizes 10 times DRAM capacity in the same surface area which is made possible by slicing submicroscopic layers of materials into columns containing memory cells. The layers are then inter-connected in a cross-point weave via perpendicular wires. Intel Optane offers superior low latency (measured in nanoseconds) and also is capable of retrieving data in a power outage.

Below are a list of known Intel Kaby Lake processors to be launched with the most noteworthy being the flagship i7-7700K featuring 4 cores / 8 threads with a 4.2Ghz base frequency and has a maximum boost of 4.5Ghz. The processors has 8MB of L3 cache with a rated TDP of 91W. The estimated SRP for the i7-7700K is $349 retail. Next up is the Core i5-7600K which is a quad-core processor featuring a 3.6Ghz core frequency and a turbo frequency of 4.2Ghz. It also has 6MB of L3 cache and is rated for 91W TDP. The Core i5-7600K is expected to retail for $239.

The most unique of the known SKUs is the Core i3-7350K. Yes, you read that right, there will be a unlocked Core i3 processor in the desktop Kaby Lake stack. This particular processor is a dual-core part with Hyperthreading support. It runs with a 4.0Ghz core clock and has a turbo frequency of 4.2Ghz. It features 4MB L3 cache and is rated for 60W TDP. Its expected to launch after the initial wave of Kaby Lake desktop parts. The SRP is expected to be $177 retail. This processor has an unlocked multiplier which should really entice performance seekers and overclockers looking to get more from a less costly part.

Complimenting the complete line-up of the Intel Kaby Lake processor family is the launch of Intel’s new 200-Series chipset family. The Intel Z270 is identical to the previous Z170 chipset in terms of PCIe configuration meaning they allow 1×16, 2×8, or 1×8+2×4 configurations with the H270 and H170 offering a single x16 config. Support for dual-channel memory is still present with up to 4 DIMMs available. As always, the high-end Z270 chipset will support multiplier overclocking on unlocked processors.

This is the first time we’re encountering SuperMicro’s UEFI BIOS so we don’t have any idea how they implemented things before but focusing on the interface we have, its actually a responsive interface with options well sorted under tabs. The option window is a bit small though and could use a bit of expanding to view the rich options under some of the tabs but overall its a good interface and only a few refinements should make this a very good UEFI BIOS interface.

Not a lot of software included in this package, we get to see drivers and configuration utilities and a SuperMicro tool but nothing really extra right here. 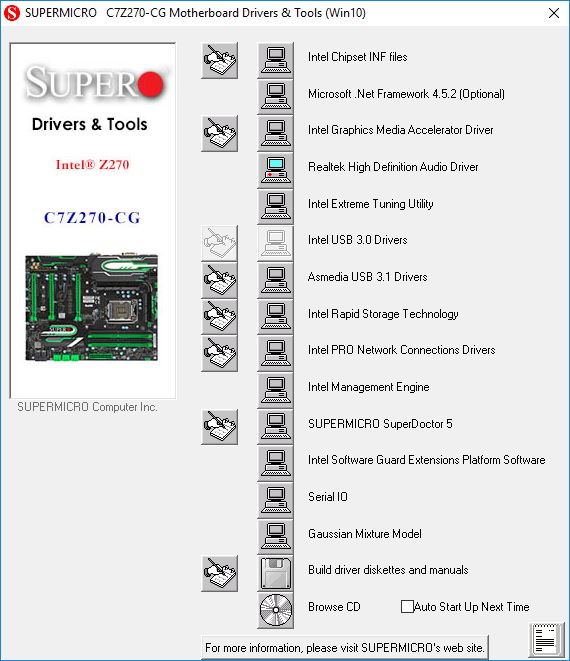 Starting with this generation, we will be shifting our attention to features rather than performance so we’ll keep commentaries on the benchmarks small if none at all. The data provided is for relative comparison only.

SuperMicro tunes the default BIOS with a really low core voltage which yields very good temps and draw for this motherboard compared to the others we’ve seen. At 1.19v, there’s really a big difference versus what we’ve seen from other boards and as we can see above from our previous undervolt of the Aorus board, there’s really a great improvement in thermal and power draw. The thermal image also shows us really good temps in the VRM area with the heatsinks barely hitting past 62*C.

As our first motherboard from SuperMicro, I have to honestly say we’re quite impressed with the SuperO C7Z270-CG motherboard. Starting off with the features, there’s really nothing extravagant here but we have is exquisitely essential and is well executed from the multi-GPU support to the rich assortment of connectivity, there’s just plenty to work with. The layout is decent and in terms of looks, the motherboard is quite a piece of work.

Going into further detail, SuperMicro did a great job in setting up their BIOS settings and while it does need some UX improvements, the UI is easy to work with and responsive enough to not be a hindrance in appreciating the BIOS UEFI. We’d like to point out that the SuperMicro SuperO C7Z270-CG motherboard’s CPU area has some capacitors which may have clearance issues in some cases but we’ll check to see first, there’s also the fitting issue with the memory on the 1st two memory slots along with the memory support still needing improvement since we were only able to run a single DDR4-3200 stick on this board but other than that its a well thought out board.

There are plenty to improve in the component side of the SuperMicro C7Z270-CG but overall its main strength is its focus in essentials. Its hard to really put into words how premium the board feels and how a more mature BIOS could really help improve the board with improved interface and memory support. Overall, its an excellent motherboard for anyone who wants a server pedigree for their system and it doesn’t get any closer to that than SuperMicro.

Pricing info to be updated.

SuperMicro backs the C7Z270-CG motherboard with a 3-year warranty. We give it our B2G Recommended Award!