In an exclusive media gathering in Kuala Lumpur, Malaysia, ASUS has unveiled its launch line-up of LGA1151v2 motherboards featuring Intel’s Z370 chipset that support the upcoming 8th-gen Core processors based on the 14nm Coffee Lake architecture. While the processors have yet to be released, motherboard vendors have been allowed to share what they have in store and in this article we’ll take a closer look at the line-up offering of ASUS featuring the Z370.

There’s not a lot we can disclose about Intel’s new processor as of now but do know we have our samples ready and we’ll deliver you information when the embargo lifts. That said, we can share with you information regarding the features that we can expect from the motherboards as they get ready to ship out particularly ASUS’ line-up. 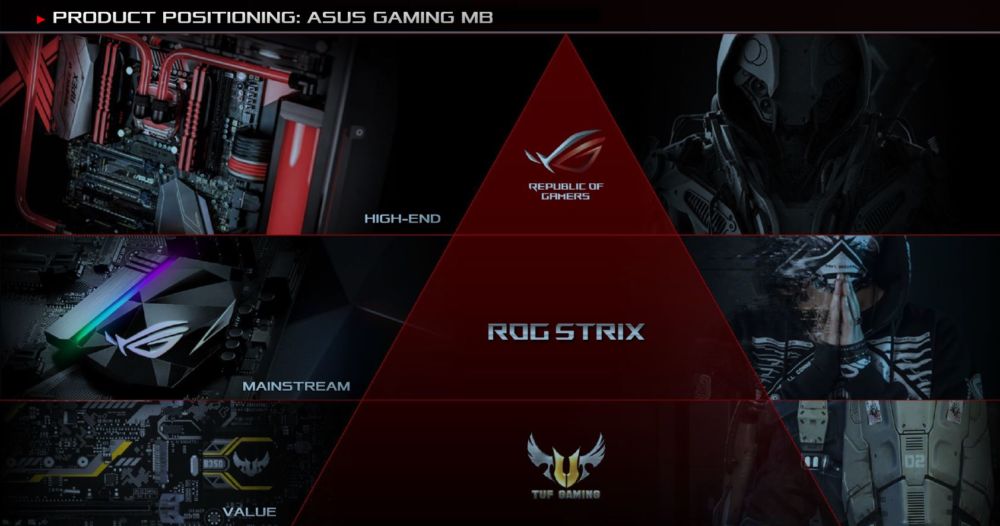 For this generation, ASUS will be heavily focusing on its gaming offering with the addition of the TUF GAMING sub-series in their motherboard port folio. As pictured above, the Republic of Gamers (ROG) mainline series still sits at the top of their product stack supported by the mainstream ROG STRIX and then followed by the reliability-focused TUF gaming line. ASUS representative have stated that the TUF series will still see their classic products make it to product but for now, only the TUF GAMING series motherboards have been shown.

In the stack above we can see the positioning that ASUS has employed in this generation with the TUF GAMING series targeting value-based gamers while the ROG STRIX addresses the mainstream gamers which include eSports-focused gamers while the high-end ROG mainline still retains its high-end, flagship focus. 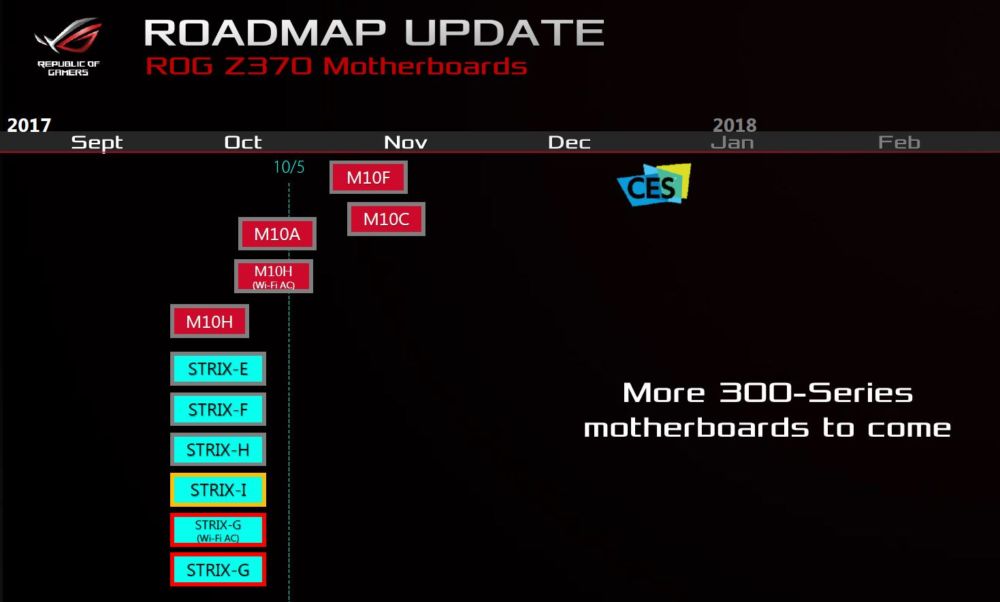 ASUS will be releasing their Z370 boards in a short wave as pictured above. For their gaming lineup, we will see the ROG Maximus X Hero accompanied by a large array of ROG STRIX products. The Maximus 10 Apex and Maximus 10 Hero Wifi will follow shortly with the Maximus 10 Formula and Maximus 10 Code.

Let’s break down each of the stack in the next sections of this article starting off with the ROG product line. 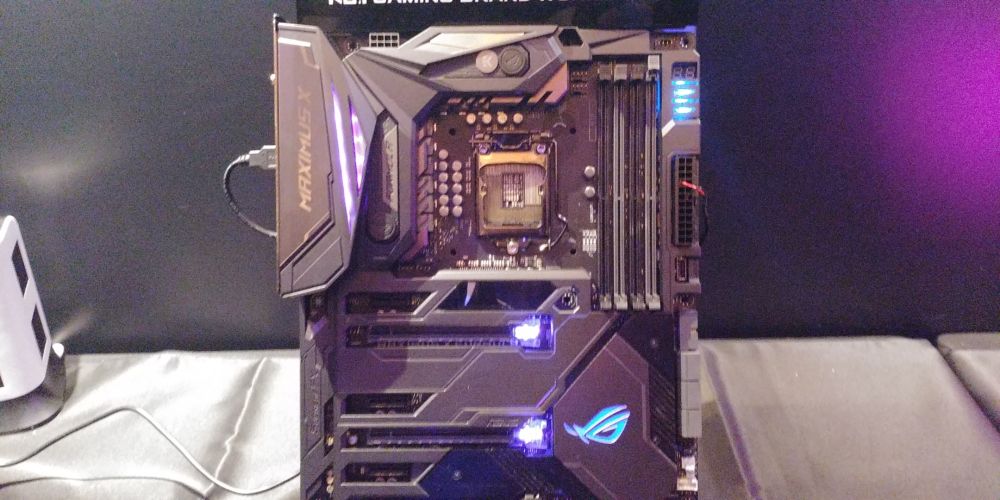 The ASUS MAXIMUS series has now reached its 10th iteration becoming ASUS’ longest-running product in their ROG family tied by the Rampage and Crosshair who only have 6 iterations as of today. The Maximus series are designed for mainstream chipsets and have been ASUS’ flagship mainstream offering as of a few years ago. It has evolved in designed over the years, welcoming new members to help ASUS address the market’s varying needs but with their new diversification approach to product positioning, the ASUS ROG series has been streamlined to be focused more on the high-end consumers now e.g. extreme gamers and modders.

Pictured above is the Maximus 10 Formula which is the currently announced top-end product for ASUS Z370 boards. Along with support for LGA1151v2 processors, native DDR4-2666 memory support, and PCIE 3.0, the Maximus 10 Formula will feature enhanced overclocking capabilities along with built-in VRM watercooling along with its AURA-sync equipped armor. ASUS also now equips all ROG motherboards with a built-in I/O shield removing the hassle of an uninstalled I/O shield after installation.

All the new ROG motherboards from ASUS support ASUS AURA as well as AURA Sync and installation of new addressable RGB headers. Compatible LED strips can now be changed on a per-LED customization basis that expands on current offerings and allows a lot more options in terms of lighting customization. 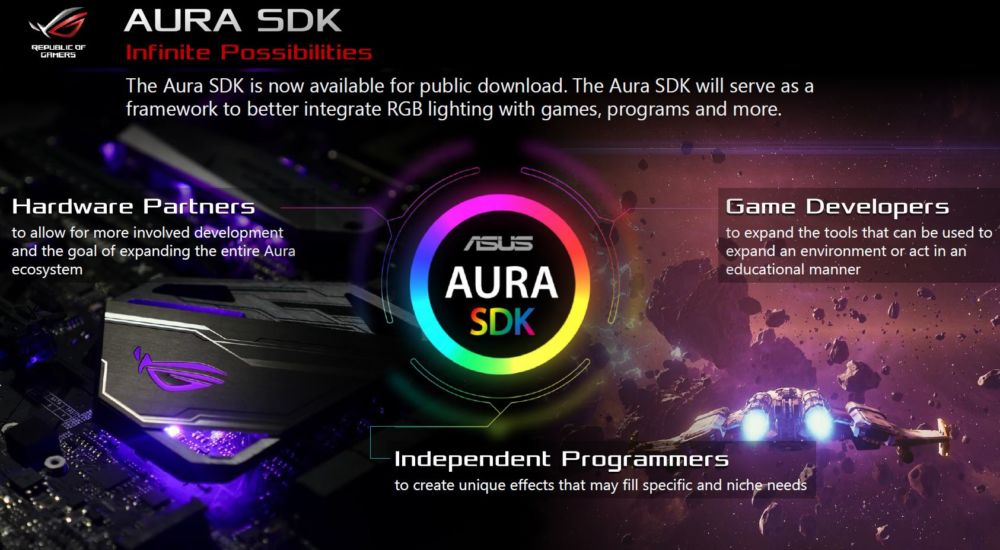 Developers wanting to expand on the current capabilities of ASUS’ AURA hardware may be able to download the ASUS AURA SDK, publicly available for download here. 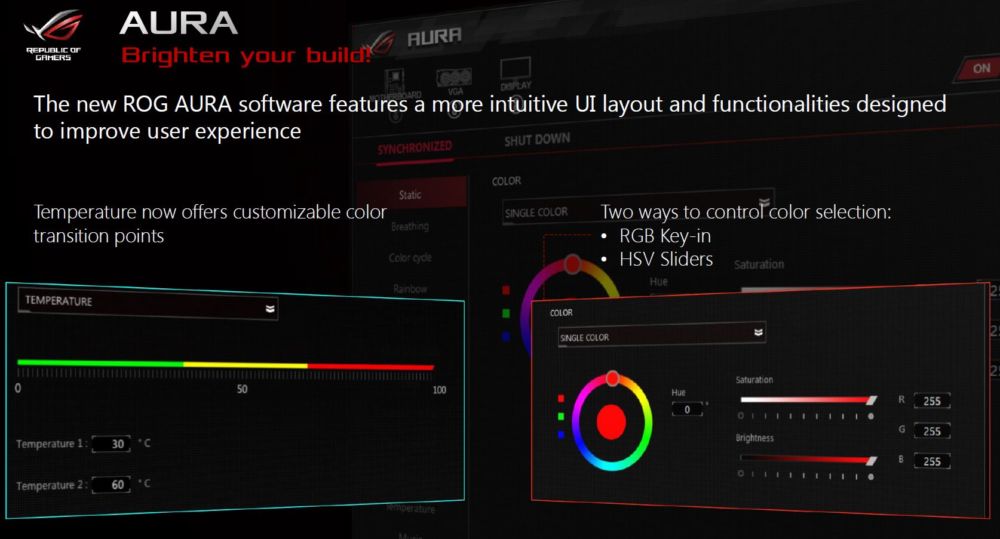 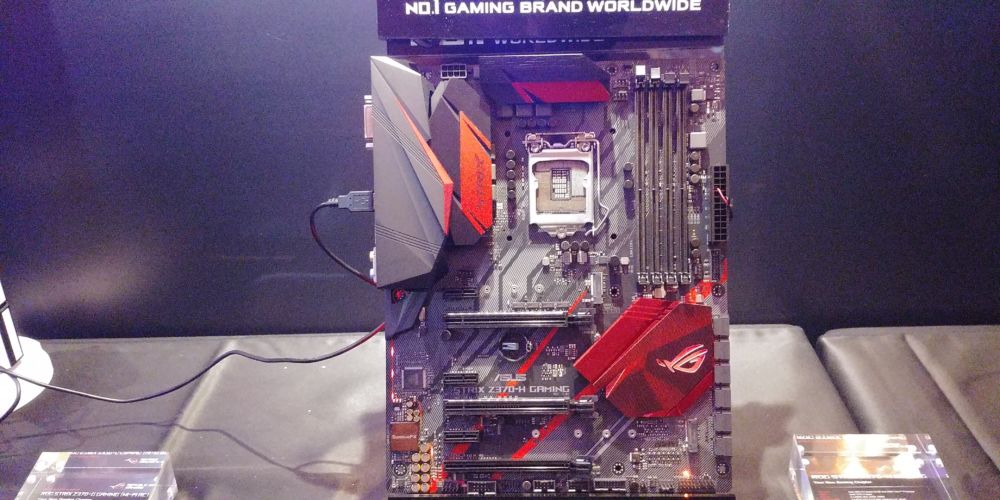 The ASUS ROG Strix lineup are the mainstream gaming offering from ASUS offering a good balance of features and performance. At launch, the ROG STRIX lineup is the most plentiful model with at least six models currently announced. The ROG STRIX still features the black and gunmetal grey scheme but a variation with black and red color scheme will be available.

The ROG STRIX Z370-I is the only ITX motherboard in ASUS’ Z370 lineup. 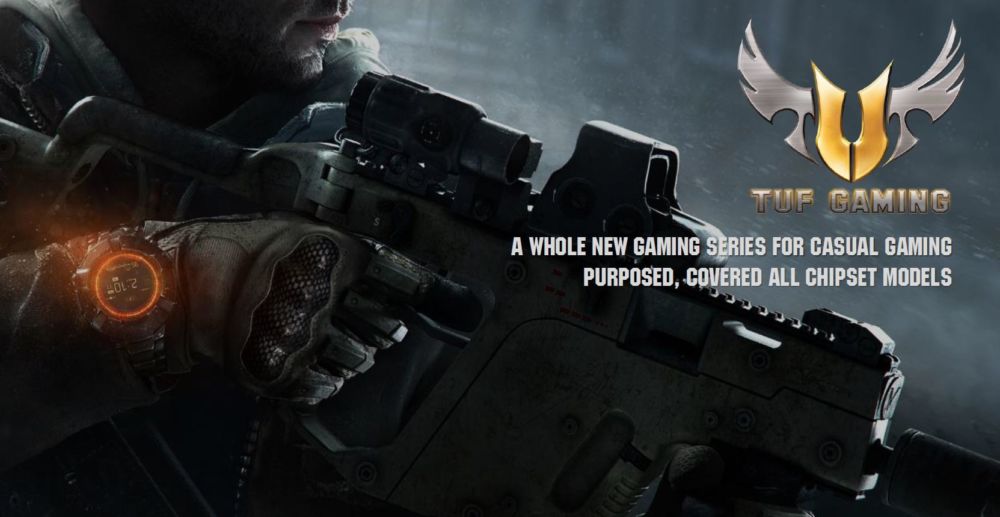 As mentioned earlier, ASUS will be debuting a new product line to join their gaming offering for the next-generation of motherboards with the TUF GAMING series. Stemming from the original TUF or The Ultimate Force, this sub-series is intended for value-based gamers and with a pedigree designed for ultimate durability, the TUF GAMING line is targeted for gamers who want to maximize their platform with the utmost in durability. The TUF GAMING series inherits the original TUF server-class durability and reliability, enduring rigorous QC standards above those of ASUS’ other mainstream offering. 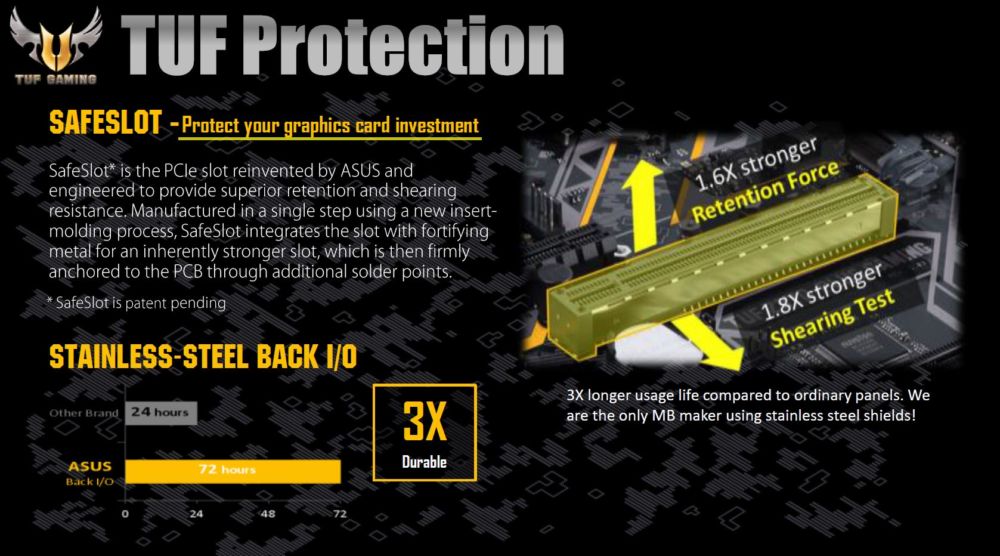 TUF GAMING products are enhanced to be the most durable amongst the rest of ASUS’ motherboard and they are made to be tough components-wise as well as physically, design-wise. The PCIE slots are heavily reinforced to prevent damage to the slots due to heavy graphics cards. Dubbed as SafeSlot, the PCI-e slots are stainless-reinforced with durable plastic which ASUS is very proud about that they patented it. 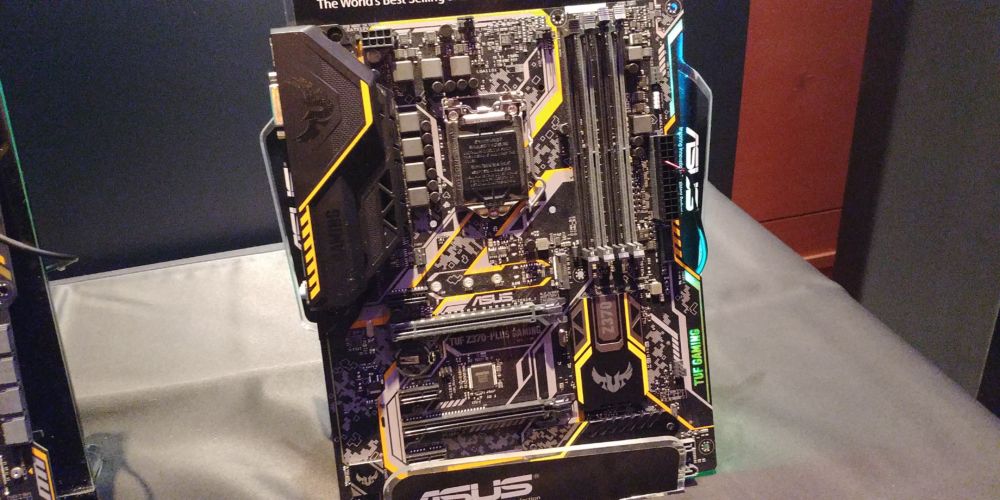 There’s a big change in terms  of visuals with the TUF GAMING line. Without the TUF Armor, ASUS has employed bold highlights and PCB prints to adorn their TUF GAMING motherboards. A large I/O shroud still maintains the TUF line DNA but everything else is looking like a new product. 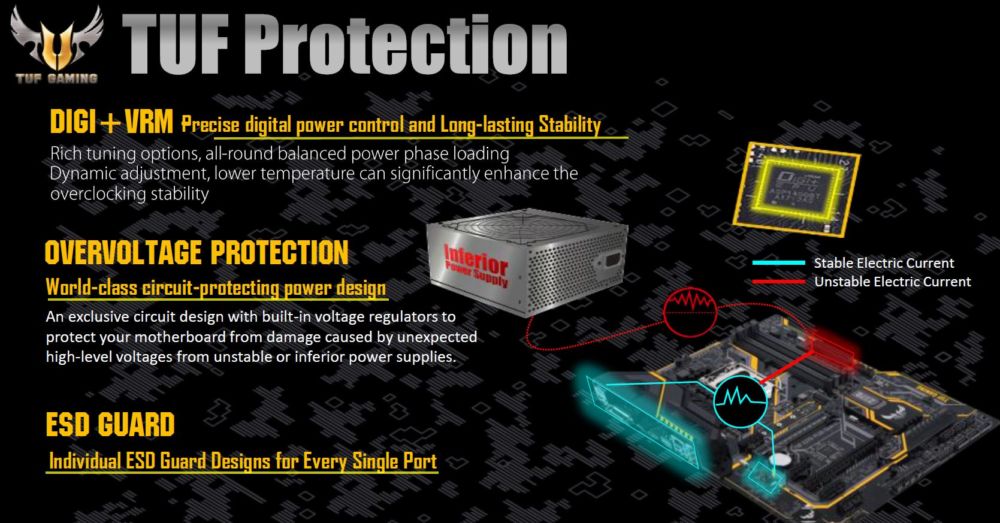 TUF durability is reinforced further with its components, TUF Components are designed to withstand further stress than normal motheboards. Enhanced MOSFETS, capacitors, and chokes are made to meet higher standards including 20% higher temps, etc. 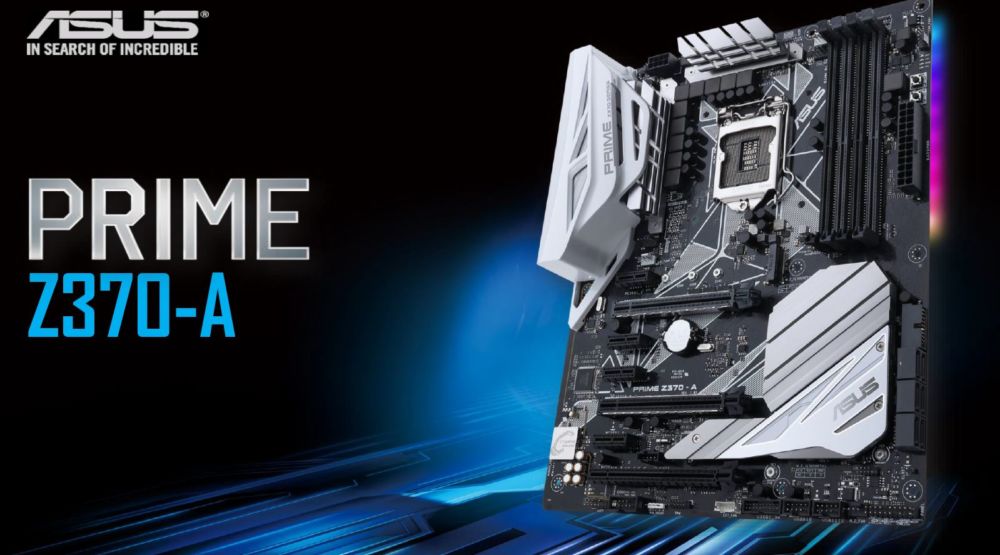 There’s nothing really much to discuss about the PRIME series aside from that its made from higher-than-normal standards by ASUS and that’s already above their normally premium build quality. That said, in terms of build features ASUS does incorporate some new things. An integrated M.2 heatsink merged with the PCH heatsink is built into one of the model just like the ROG Strix and ROG models. 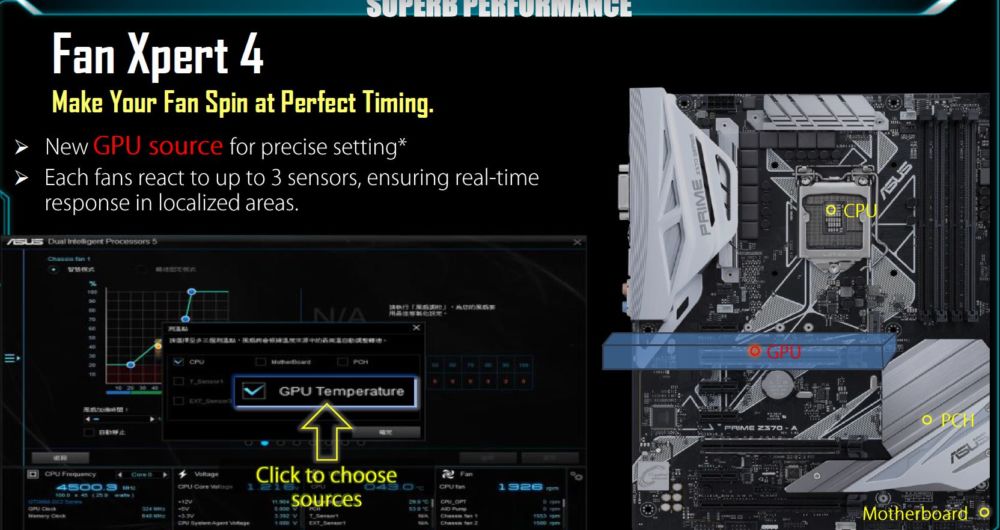 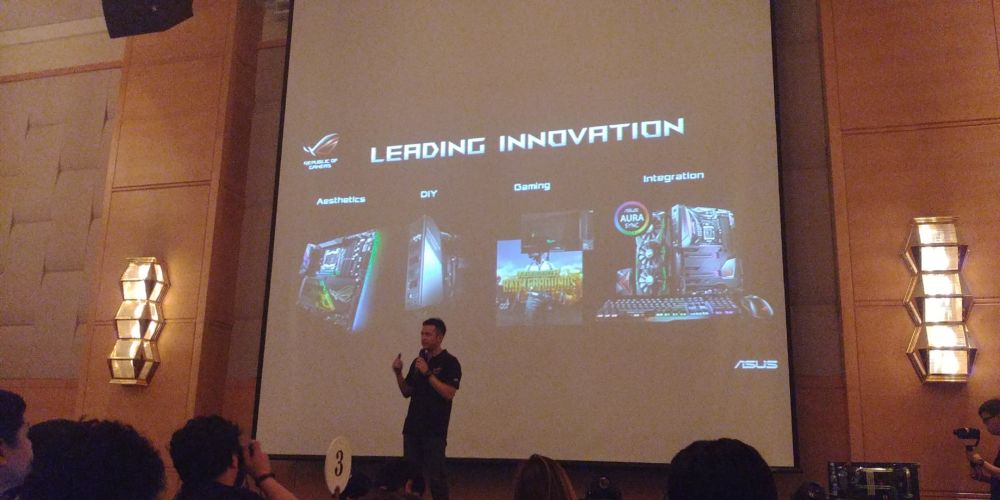 ASUS’ for some reason is pulling out all the stops in this launch and while they may be reserving some of their flagships for a later launch, this is ultimately one of the most stacked launch line-up they have had in recent years. With at least 15 models announced, not including possible WS and entry-level products, this is a huge execution from them.

With such a big launch from Intel incoming, its understandable a brand like ASUS is banking heavy on this. That said, consumers will still decide if they want to go the 8th-gen route and with the appeal of 6-core i7 plus the overclocking potential, its a good jump-off point for aspiring content creators, streamers and multimedia enthusiasts that want to go the Intel route.