ASRock was well on its way to being a big name in motherboards when it suddenly just dipped out of the limelight and lost its crowd Big 3 crown. While the reason for their sudden drop is best left for another topic, ASRock has been on out of our labs since the Z77 era and now a couple of generations after we finally get to see them back in our test bench to hopefully see what they’re boards are made of. On a personal note, my first ASRock motherboard was a Fatal1ty series so its just right to kick things off with a gaming motherboard. We have the ASRock Fatal1ty Z170 Gaming K4 so read on!

Intel has opted to stagger the launch of the Skylake CPUs with the flagship Core i7-6700K and Core i5-6600K unlocked processors debuting at launch together with the Z170 chipset. Further SKUs were released after launch for the lower end of the product stack.

Intel Skylake CPUs presents a new microarchitecture using the 14nm process seen in Broadwell processors. Intel Skylake CPUs will feature improved efficiency numbers and IPC performance together with a new IGP. As with all launch CPUs, these top-end unlocked processors are aimed at enthusiasts and support multiplier overclocking.

Also in the platform is support for DDR4. The new processors fully supports dual-channel DDR4 memory with the new DDR4 modules supporting higher default memory of 2133MHz at only 1.2v. Some motherboard makers may also opt to use DDR3 still as the processor still retain support for that.

Accompanying the Intel Skylake 6th-gen processors is the new 100-series chipset, codenamed Sunrise Point. As the primary consumer chipset for the 6th-generation Intel Core processors, the 100-series chipset is available in various chipset series from the mainstream H110, H170 and Z170 and the business-class  B150, Q150 and Q170. Intel has decided to stagger the release of their Skylake processors which made the release of the other chipset only happen recently. While it’d take an entire post to describe the finer details on the difference of each chipset, to sum it up really quick the chipsets differ in features: with the Z170 offering the most in terms of expansion and support as well as PCI-e lanes with lower model chipsets reducing on what’s offering the business-class ones expanding to include Small Business Basics and Small Business Advantage.

For the most part of what we’re reviewing we’ll take a look at the Z170 chipset, the top-end chipset for desktop and offers the most features and support for multiplier overclocking. 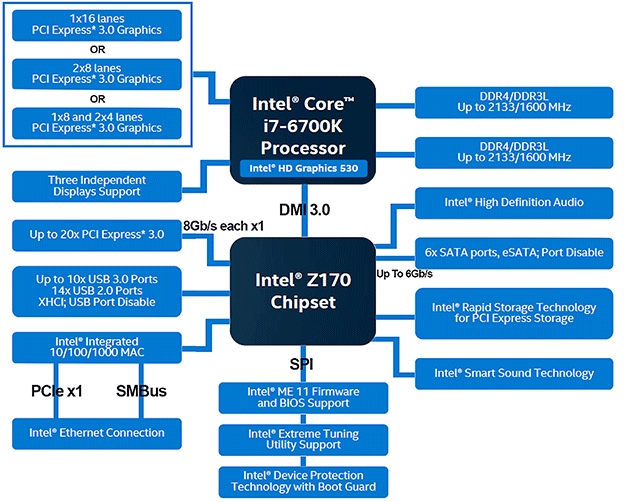 One of the primary changes from Z97 to Z170 is support for a newsocket, the LGA 1151. LGA 1151 supports Intel Skylake CPUs and is not compatible with LGA 1150 processors and vice versa. Mounting holes for the 115x range have remained the same though so your old LGA 1156/1155/1150 will still be compatible with the new LGA 1151 motherboards.

Support for DDR4 memory is also one of the changes that comes with the new chipset. Connectivity between CPU and chipset also utilizes DMI 3.0 allowing a full 20 PCI-e 3.0 lanes which is up to the motherboard maker on how they utilize it.

ASRock packages the Fatal1ty Z170 GAMING K4 in a black box with their gaming logo. This is in contrast with the typical red/black box with Jonathan Wendel’s face in the front. The model name is highlighted on the lower right of the box and if you’re not familiar, its kinda hard to spot so I’m not sure this is the right decision to go for a box design. Inside we have a conservative bundle of SATA cables, I/O shield, installation disc and documentations.

As with many gaming motherboard, the ASRock Fatal1ty Z170 Gaming K4 has a black and red theme with ASRock utilizing a mica red tone on its heatsinks and a real black PCB with angular shrouds on the rear I/O area. The board is a full-height ATX size but the width is partial only.

On the I/O side, the board features USB3.0 ports with a Type-C connector included. Video display options include HDMI and DVI output and the Realtek AL1150 gives us 6 audio jacks for 7.1 surround capabilities. A legacy PS/2 port is also present for those that still use peripherals utilizing that connectivity.

Expansion slots include support for 2x PCIe x16 and 3 PCIe x1 devices. This board does not support SLI which is becoming a trend for lower-mainstream boards right now. An M.2 slot is in between the PCI-e x16 slots for storage devices. 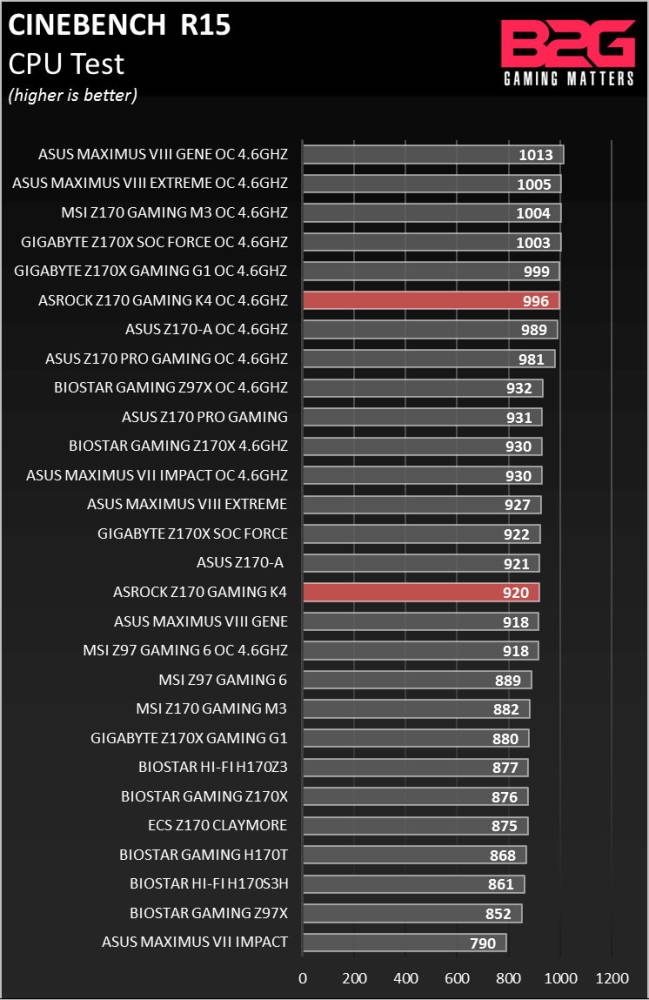 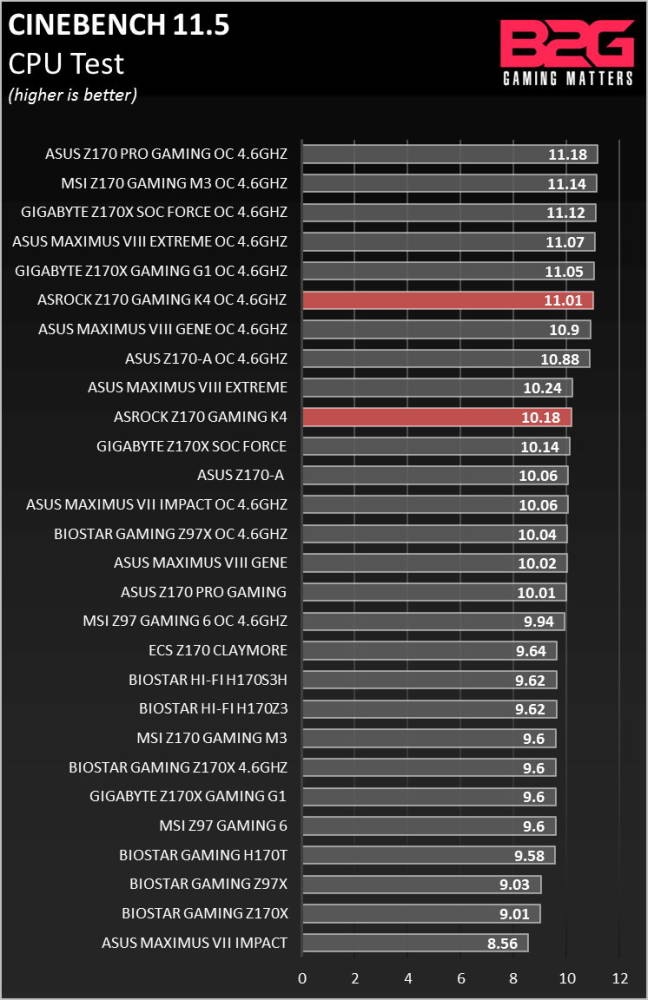 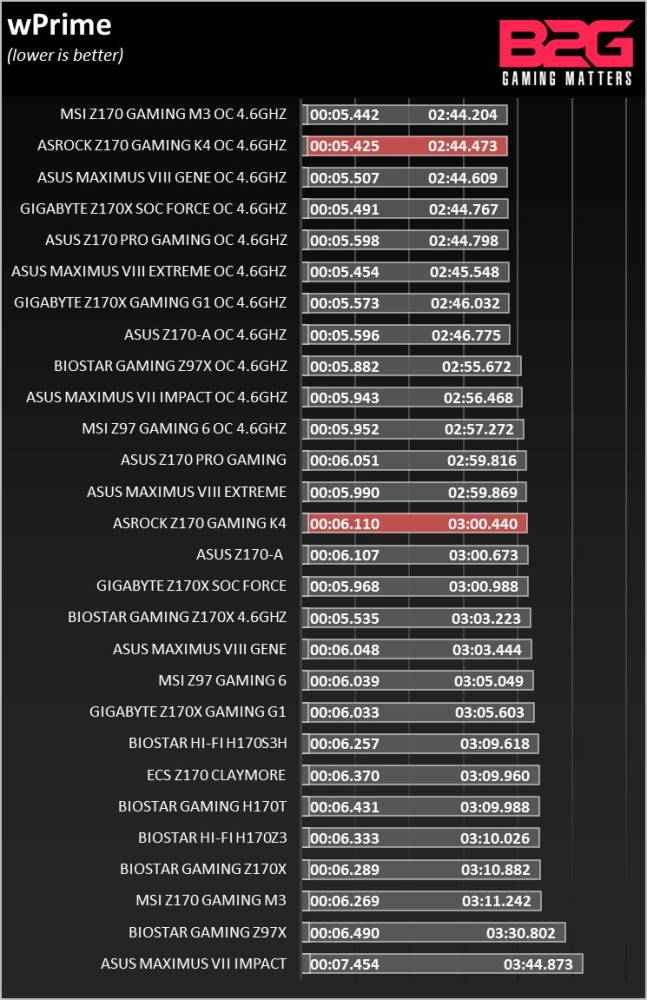 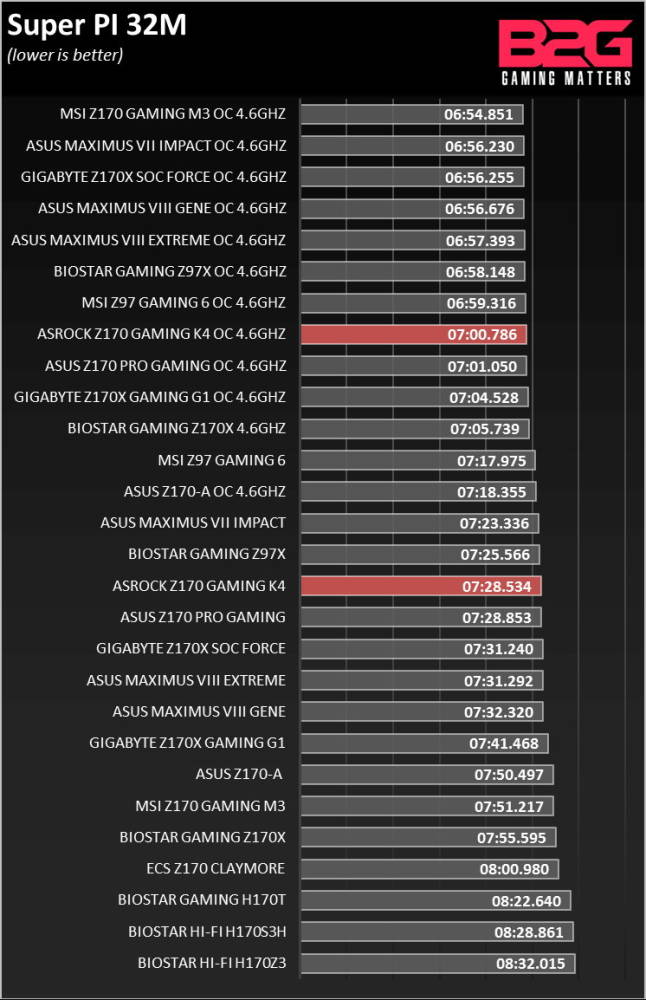 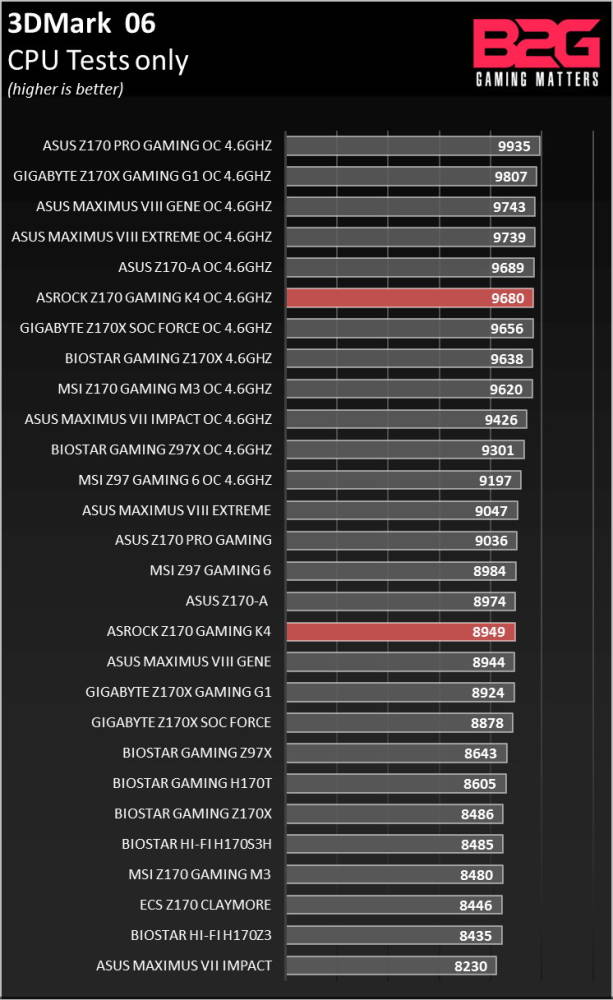 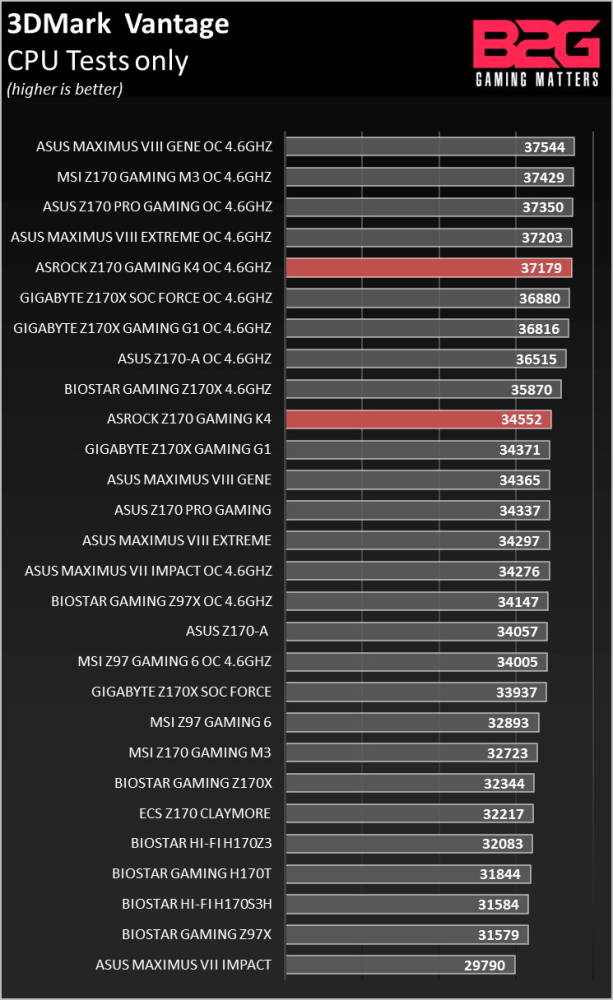 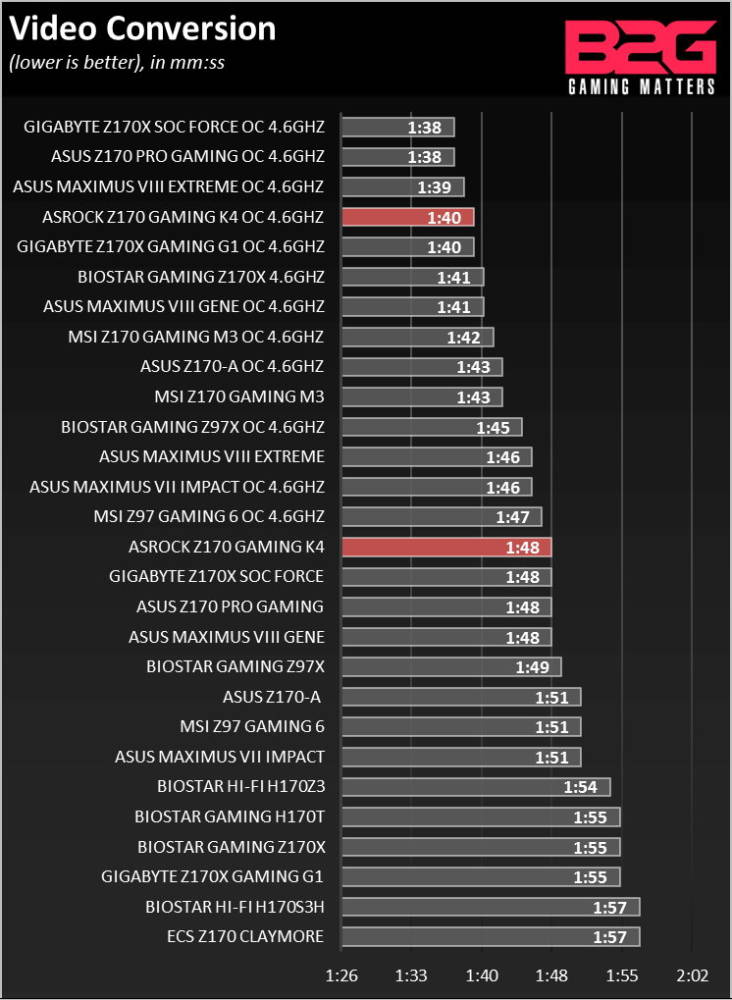 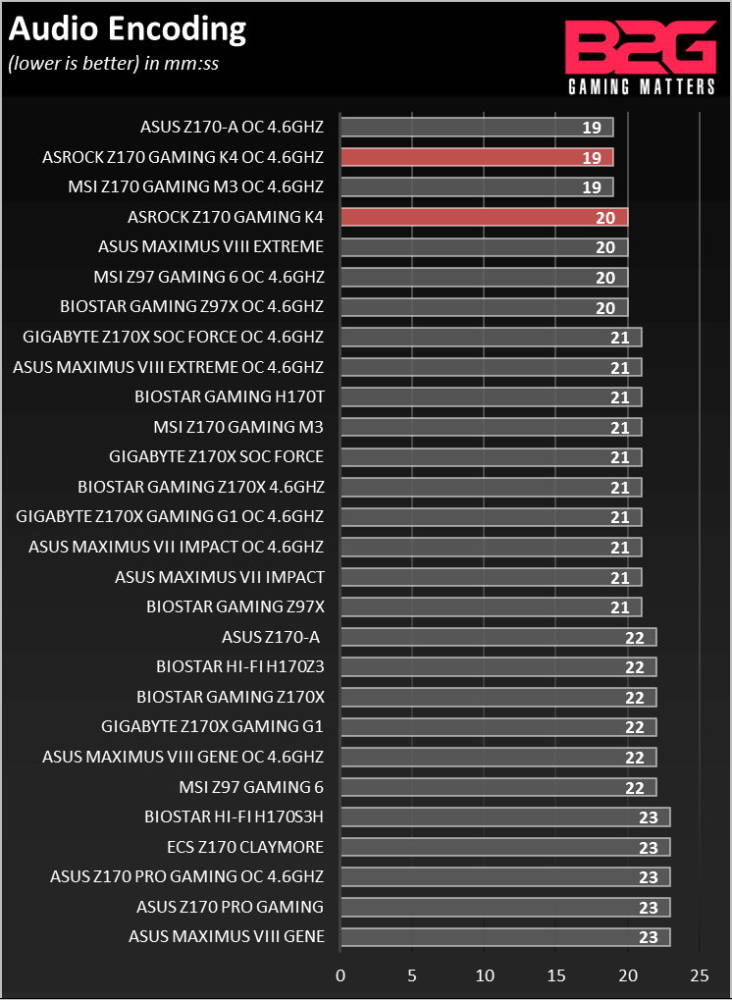 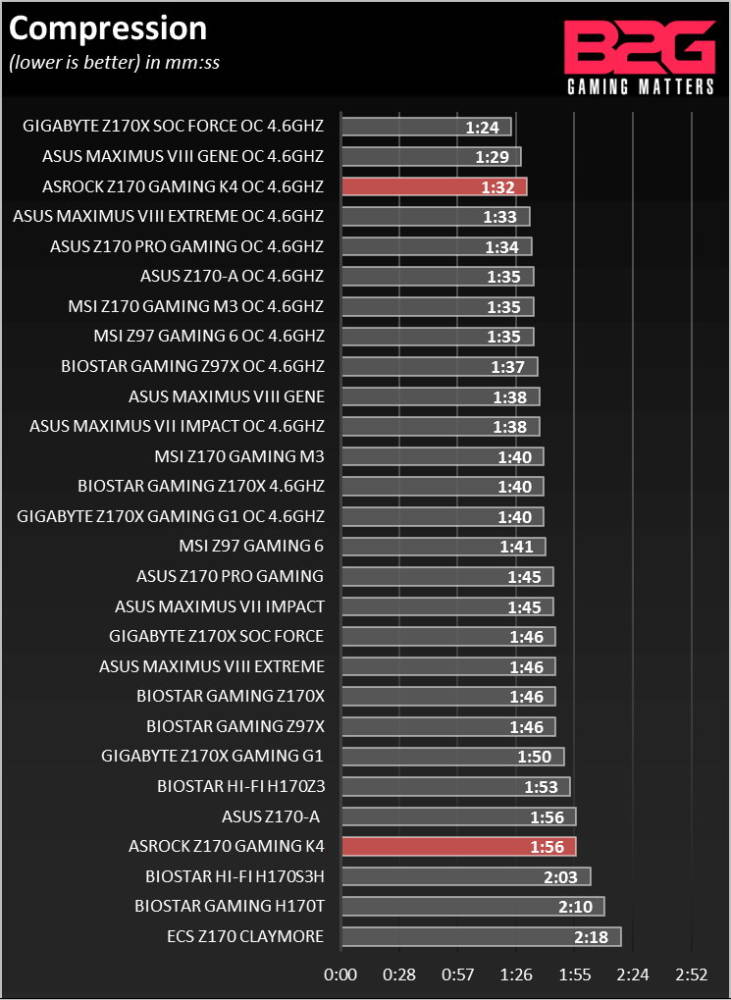 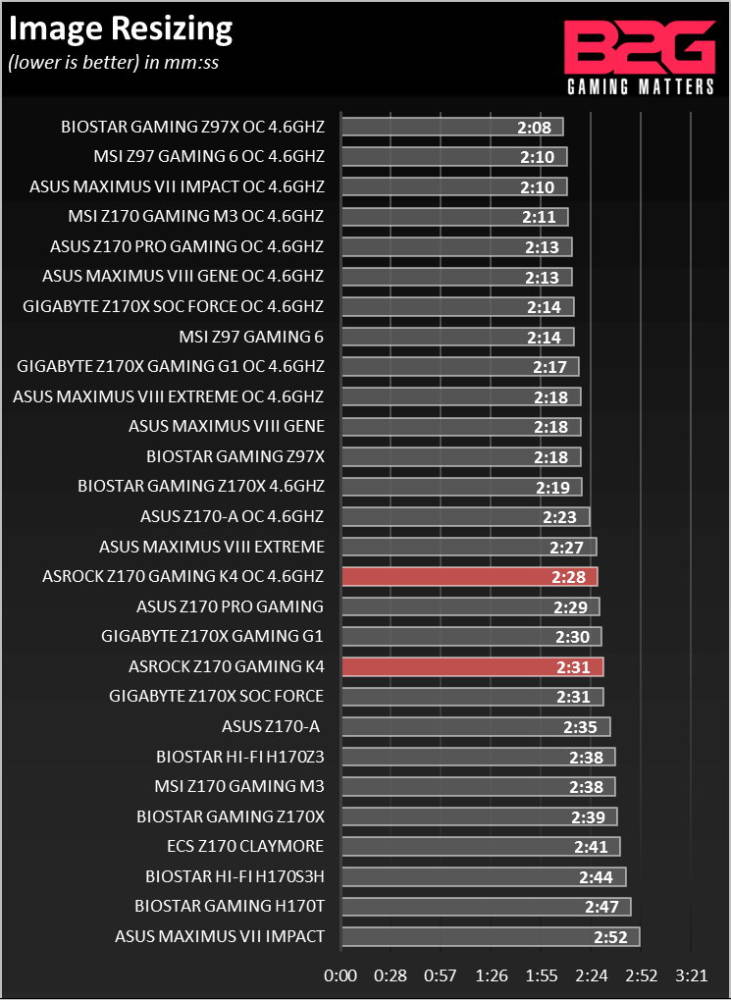 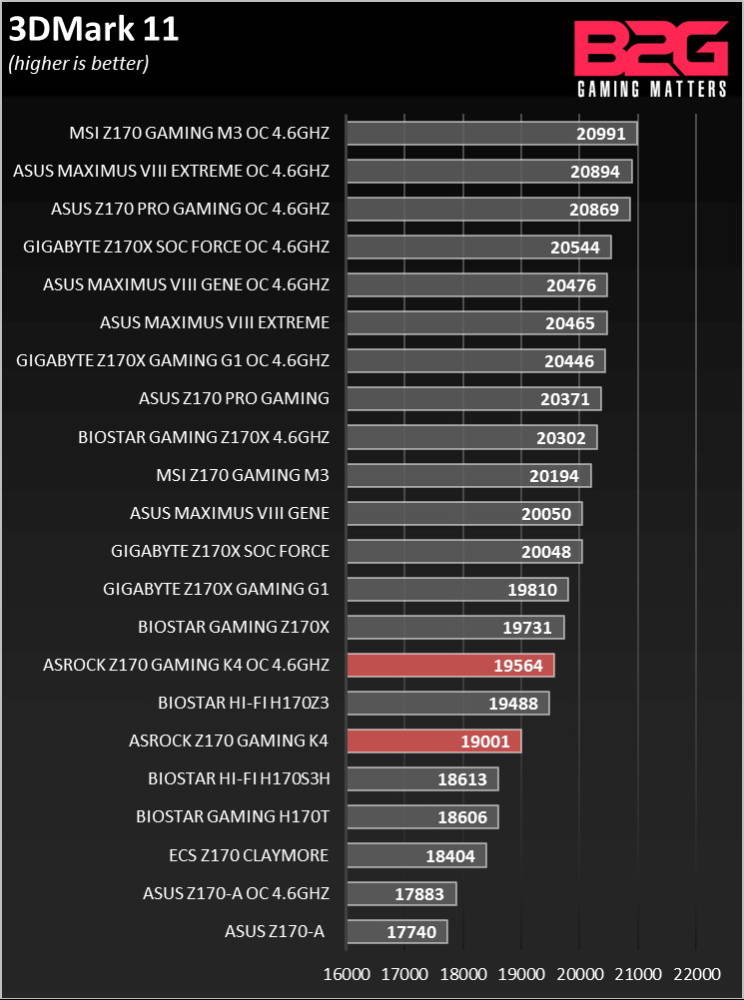 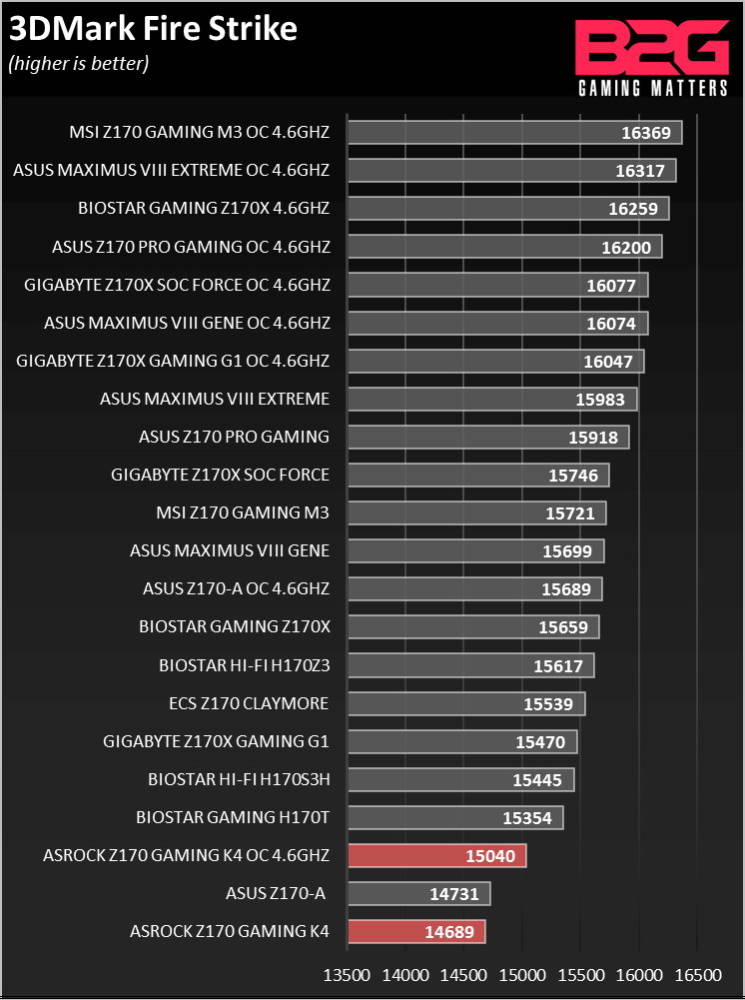 We’ve pretty much moved away from statistical OC results and now maintain a feedback on how the experience goes in terms of overclocking. In the case of the ASRock Fatal1ty Z170 Gaming K4, its pretty much the same as some of the higher-end boards with this one also providing pre-configured overclock presets to choose from should your CPU be capable of handling the OC. Our processors hits an OC wall at 4.6Ghz so anything higher than that, as long as bench stable, is already impressive. We tried going 4.8Ghz at 1.44v but the proc BSODs. 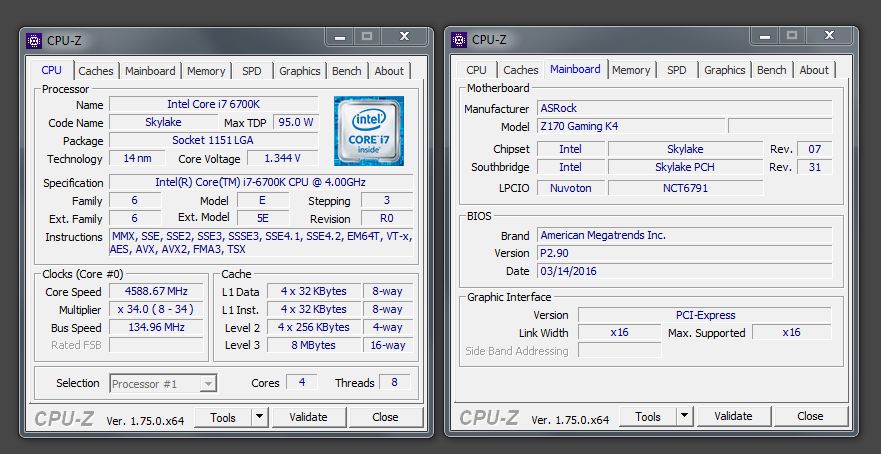 ASRock pioneered the Sky OC feature which enables overclocking on non-K CPUs but for our tests, we’re gonna go ahead and OC via BCLK on our 6700K. We manage to reach the same 4.6Ghz OC via BCLK via a 135Mhz frequency. We tried going further but we’d need more time on this board. That said, all the options you’ll need for a daily overclock is here like voltage control, LLC levels, and DRAM/CPU OC options are plenty. We’d like to note that the board does flake out on higher-frequency RAMs. We’re using a DDR4 3000Mhz modules and the board refuses to run dual-channel on that speed. We clocked it back to DDR4-2666 and were able to run the board no problems. All benchmarks were run at this speeds so its a bit of a handicap against the ones running the DDR4-3000Mhz modules.

We check to see how motherboard makers tune their default BIOS settings and see how it impacts temperatures and power consumption. The system is left to idle for 30 minutes before readings are taken and load data is taken 30 minutes while AIDA64 stress test is running. Power readings are taken for the entire system from the socket. Power draw for the entire system is captured for this test via an outlet wattmeter and temperatures are recorded via Intel Extreme Tuning app. 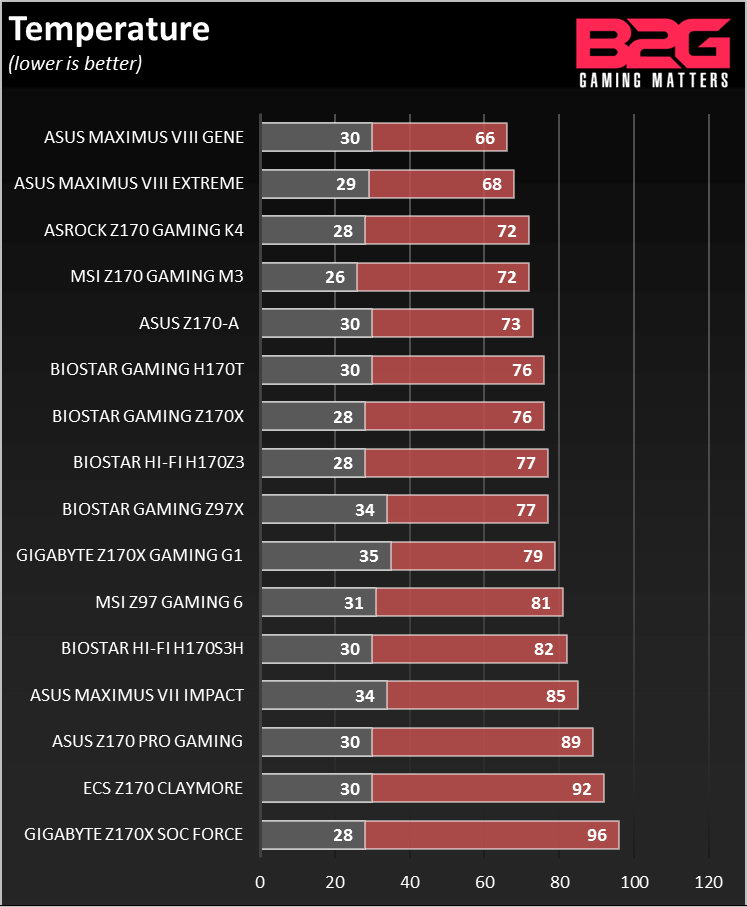 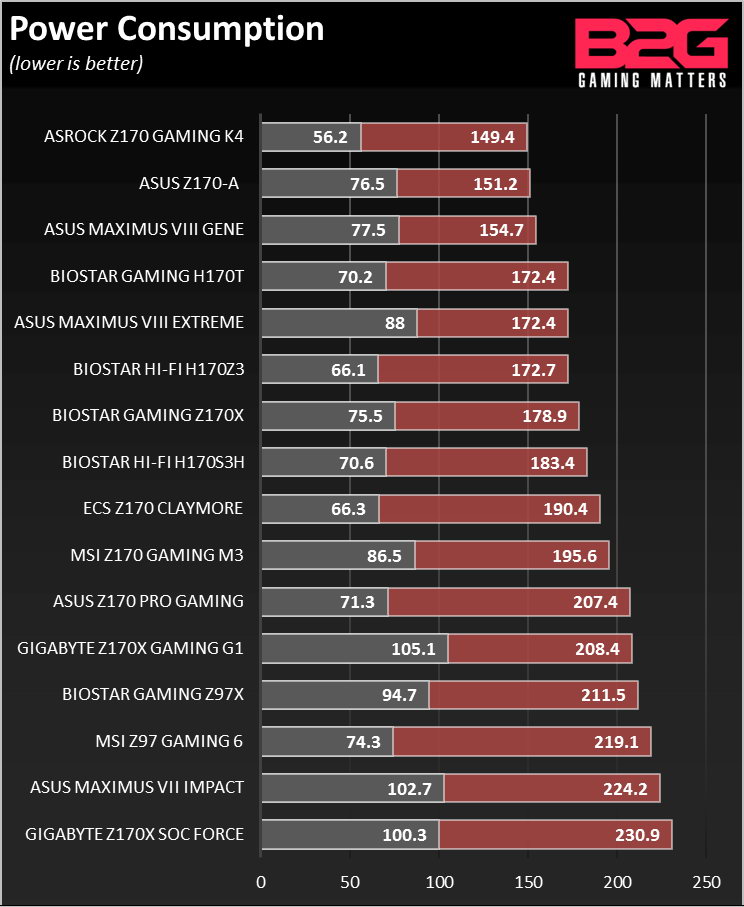 Temps are on the better side of the chart with the board dropping a considerate amount of voltage during idle mode and using particularly lower than average 1.28v voltage during load.  On a watt consumption perspective, due to the lower idle voltage this board hovers a considerably lower level than most of the other boards we’ve tested. On load, it averages  the same as the other raw boards we have on the bench.

Let’s break it down for the ASRock Fatal1ty Z170 Gaming K4:

Performance. The ASRock Fatal1ty Z170 Gaming K4 motherboard competes well with the other boards in terms of performance but misses in a few. That said, its still within acceptable levels and should a BIOS update correct the memory compatibility on higher-clocked modules, it should improve the performance on some applications. Overclocking gives us a good improvement on CPU performance but nothing impressive unless you have a capable processor and cooling to go with it.

Build Quality. I saved some of my commentaries about ASRock’s build quality until this section and ASRock has indeed managed to maintain a level of quality they have achieved over the years but on this particular board, there’s been some cost considerations and that being sad, this board does feel a bit short in terms of extras. While looks may be subjective, ASRock’s decision to go with a flat PCH shroud and rather plain I/O shroud just gives the board a flat feel. Build-wise, the layout is clean and decent with the PCB lighter than we normally would like on this price segment.

Functionality. On an average usage scenario, this board scores nicely as a basic foundation for a mainstream gaming setup. The lack of SLI though does limit upgrade paths with Radeon cards being the only choice for multi-GPU options. M.2 options, USB3.0 Type C and SATA Express though are present for connectivity and I/O performance options and overclocking features are reasonably alright.

Bundle. The board is a basic mobo bundle with no extras for accessories. What you do get is an Xsplit 3-month subscription gift cheque but ASRock is holding a game bundle right now where you can redeem a copy of Assassin’s Creed Syndicate. Please see this page for more info.

Value. With street prices hitting as low as $145, this board is really affordable for a Z170 board.

The one glaring oversight on this board is the lack of SLI. Should ASRock have went to license this board for SLI support, it would’ve been a great deal allowing gamers to upgrade to a mainstream multi-GPU configuration at a reasonable budget range. Crossfire is a good option but we feel that most users right now are opting for GeForce cards and given the reasonably good scaling in Maxwell cards, there’s really a lot of reason to go that route.

Regardless though, the ASRock Fatal1ty Z170 Gaming K4 is one solid board and offers all the features you need from a good gaming motherboard. While its audio solution isn’t as advanced as most that compete in this segment, the general offering of the board together with its price is a good deal.

ASRock needs to really consider its designs again if it wants to retake its share from MSI but as of now, they’re competing with BIOSTAR with this motherboard and at nearly the same price, BIOSTAR offers more value right now but availability on that board will sure give this ASRock board an advantage. ASRock does offset it further with a free game and an Xsplit sub which should appeal to upcoming streamers.

In closing, the ASRock Fatal1ty Z170 Gaming K4 is a well-made motherboard with good build quality. If you’re in the budget range of of Php 7900 for a single GPU build in tandem with a Skylake processor or you want to go the Crossfire route, this board is scalable enough for your needs.

ASRock backs the Fatal1ty GAMING K4 with a 3-year warranty. We give it our B2G Recommended Award! 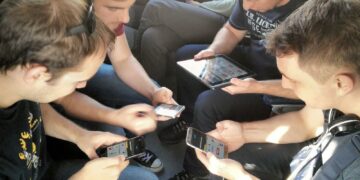