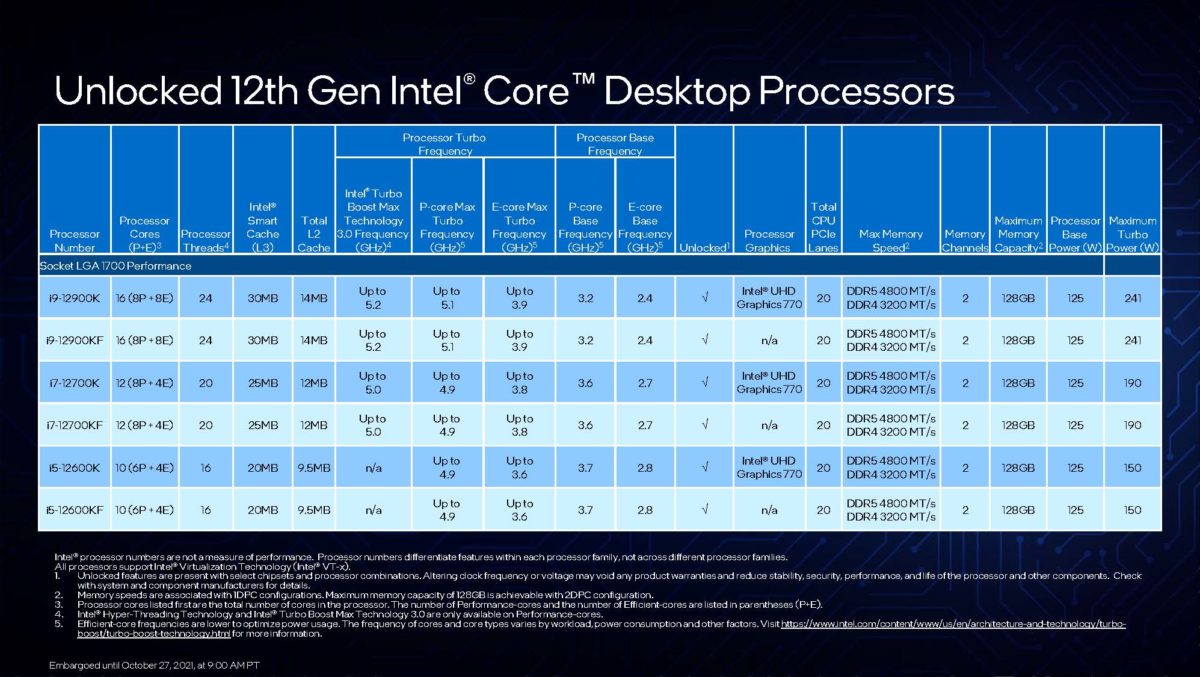 Intel will be releasing six unlocked CPUs for launch of their 12th-gen CPUs, offering both K and KF variants of the 12th-gen Core i9, Core i7 and Core i5. These CPUs will be launched alongside Z690 chipset motherboards aimed for enthusiasts, many of which have already been announced by partners like ASUS, MSI, ASRock and GIGABYTE plus more. A second wave of releases is expected for 2022 and will include the rest of the 12th-gen CPU lineup.

The Core i9-12900K and i9-12900KF will be the flagship models and will have 8 P-cores with HyperThread + 8 E-cores. This effectively makes them 24-thread CPUs. Take note of the core convention as Intel will be using the E-cores as well to segregate their SKUs. You’ll see the convention of P-cores + E-cores used so you may see us show the core counts as 8+8, with the current line-up’s models all having HyperThreading. It has been shown that upcoming SKUs may not include E-cores altogether but for now, the 6 launch models have this commonality.

Further features worth noting is Turbo Boost for these CPUs: the Core i9 and i7 will have Turbo Boost Max 3.0 while the Core i5 won’t. In the chart above you’ll also see that we don’t have Thermal Velocity Boost anymore. There is also a new column for Processor Base Power and Maximum Turbo Power. We’ll discuss this in a later segment.  Lastly, Intel has confirmed that the 12th-gen Core CPUs do not support AVX512.