The BEZEL 32MD845 is the brand’s biggest display size in its MD845 gaming monitor series. The one that we’re about to look at in this article is version 2 of the said model. It features similar specifications found on its small brother the 27 inches BEZEL 27MD845 V4. Additionally, if you’re interested, you can take a look at the first generation of the MD845.

Without further ado, let’s get into it.

The packaging of the BEZEL32MD845 V2 is pretty straightforward. Mostly, the carton box is made of a single layer of corrugated packaging. The brand also has covered the box with a layer of brown paper that highlights the branding name.

Now looking at the side, you will find the product label that displays certain specifications and aspects of the monitor.

Taking out the content of the package reveals foam cushioning holding the monitor inside. Furthermore, it also reveals the included accessories.

The package comes with 2 DisplayPort cable which one of it came from UGREEN, a power brick, a type I power cable (which is unusual), the neck stand, the base stand, and the screws and cover for attaching the stand to the monitor.

Additionally, the base feet stand comes with white rubber feet which is nice to have. We’re just not certain though as to why the brand went for a color white if the product itself is color black all over.

Opening the foam cushion cover reveals the monitor is inside a foam bag. The foam bag acts as another form of protective cushion and layer to prevent possible trivial damage such as scratches and dents.

The monitor is fairly easy to assemble. It comes with 5 screws that 4 will be used to attach the neck stand to the connection point at the back of the monitor. Once assembled, the monitor is pretty nifty to look at. However, we did notice some quality issues around the casing which makes the monitor look cheap and feel cheap. The stand, on the other hand, is pretty solid and sturdy. It is made of metal so it doesn’t cause any monitor wobbling.

Now looking at the back, the first few things we noticed immediately is the RGB lighting. The monitor is equipped with 4 strips of white illuminating material that spreads out the light coming from the LED. Other than that, you will also find a trigger look design at the lower left which appears to be a joystick manual controller for the monitor’s menu navigation and control, and a quick button trigger for the built-in crosshair of the monitor.

Here’s a closer look at the power button that also functions as the control button as well as the button for enabling monitor crosshair.

Lastly, turning the monitor ON automatically turns the RGB LED lighting by default. You can control the LED effect and it can be set in either Shade or Breath mode.

In this section, we simply rate the monitor’s performance out of the box. Unfortunately, yours truly doesn’t have any color measuring tool such as Datacolor SpyderX PRO Colorimeter to accurately measure the color accuracy reproduction in terms of sRGB and AdobeRGB color space.

Out of the Box Dead Pixel Test

In this test, we simply displayed a single color on its full display area to pinpoint and skim thoroughly if there are any dead pixels or stuck pixels. After performing the test, we found 2 dead pixels out of the box. Well, somehow finding that there are dead pixels did not surprise us. The value and price of the BEZEL 32MD845 V2 are oriented towards budget-minded consumers. With a 32-inch screen offering, it comes with a higher chance of having dead pixels unless if BEZEL is implementing control quality strictly. However, for them to offer a monitor with features found on the 32MD845 V2 at an affordable price, there will be compromises and out of the box, we can already figure out the cost of offering the monitor with such specs at a competitive price.

In terms of gradient performance scaling, using a 255 full 4:4:4 RGB setup, we tested the monitor’s performance in showing different shades from black to white in which, the 255th level is the whitest possible. Fortunately, the monitor performed average. There are minor noticeable banding at grayscale to black. A closer look, we’re starting to assume that the 32MD845 V2 is not an IPS monitor and it’s more of a VA type.

For the sharpness test, the monitor performed averagely as well. There were minor shadows when a cluster or small text are being displayed. The issue is most noticeable when texts are displayed on a white background. Our test is done by changing the text display from small to large font and from white to black to black to white scheme.

For our Gamma test, the monitor has a built-in gamma adjustment which is nice to have. Out of the box, depending on your purpose, you need to make a certain adjustment to achieve optimal performance. By default, the monitor’s built-in gamma setting is set to 2.2. As a rule of thumb, low gamma is ideal and is more appropriate for bright rooms and non-movie content. On the other hand, higher gamma is typically better for movies and darker rooms.

Monitors come with different display panels and usually, depending on the type of panel, the cost of the monitor is affected greatly by it. With IPS panels, you can expect a lossless viewing angle of up to 178 degrees without any form of discoloration or saturation. For BEZEL 32MD845 V2, there were no issues when viewing from side to side, eagle’s eye view, and worm’s eye view. However, if looked closely, the contrast changes a little when viewed extremely from top and bottom.

Out of the box, the BEZEL 32MD845 V2 features a 144Hz refresh rate. We were able to confirm that it does perform 144Hz using a frame skipping tool that verified the refresh rate of the monitor. There was no frame skipping which proves that it is a 144Hz monitor.

When it comes to its input lag, we can confirm that it truly is a 5ms response time. We compared the monitor against a 3ms gaming monitor, the BEZEL HX270. As you can see on the image above, on the monitor there’s a microsecond difference of 2.

We were able to achieve this test by performing a time counter on both displays while in clone mode.

The picture quality of the BEZEL 32MD845 V2 is somewhat mediocre at most. As you might have seen already above, the brightness of the monitor is weak with a peak of 190cd/m^2 which is very unusual for an IPS monitor. Out of the box, you will already notice the weakness of its brightness once you turn the monitor ON. Due to this, the picture quality is greatly affected. Some colors tend to look washed out while others ended up being too dark than intended. The color white looks pale and this raises a concern for us. Making this monitor not ideal for professional use for photoshop, video editing, and visual representation where the accuracy of the color greatly matters.

Lastly, the uniformity of color is excellent. Changing the degree of the color gray causes no issue in uniformity. The monitor was able to handle this test easily.

When overclocking, we only test the capabilities of the monitor out of the box. By doing so, this gives our general readers the idea of how this monitor performs when pushed to its limits without going too much into it.

On our test, we were able to achieve a stable overclock of up to 156Hz.

Anything above 156Hz starts to cause display artificating which indicates an unstable overclock.

The BEZEL 32MD845 V2 is one of the few monitors on the market that offers an unusual feature that is usually used for security and monitoring purposes and it’s called PiP or Picture in Picture.

With the built-in PiP, you can set up 4 different displays. You can also configure other modes by changing position, size, and switching display.

One of the oddest features that the BEZEL 32MD845 V2 has is its analog joystick switch control. You can use the analog joystick control to either set the power of the display, change the brightness, toggle crosshair, and change picture mode. Furthermore, it can also be used to navigate through the built-in menu.

When it comes to the monitor options, it supports FreeSync, DCR, built-in Gamma, Dynamic Luminous Control, Volume Control, HDR, and more. Additionally, each direction has its own function other than navigation.

Other than that, there’s nothing much else to check on. Configuring the monitor to achieve optimal performance and best picture quality will usually go down to personal preference.

Does it support G-Sync? Basically yes, it might now show on the NVIDIA panel but it will allow you to enable it via G-Sync support.

The stand is pretty solid but it lacks the function to allow the users to adjust the height, view, and angle of the monitor.

The BEZEL 32MD845 is a gaming monitor that’s designed to cater to those who desire to have a wide large screen to game on at an affordable price. On the papers, the monitor features desirable specifications that you won’t usually find on most monitors on the market. Most especially given its selling price. It has a slick look and aesthetics with a curvature that aims to enhance the viewing quality of the user. To further elevate its aesthetics, it comes with RGB illuminating LED effects at the back with two different lighting modes. To make it even better, the monitor features a high refresh rate of 144Hz with an unusual feature that’s hard to find for a gaming monitor and its picture-in-picture function.

Overall, the BEZEL 32MD845 V2 is a monitor that’s a little difficult to consider or recommend. For one, it is the cheapest 32-inch curved gaming monitor with such specs on the market, however, for the brand to achieve such a feat and to place the monitor at a competitive price, compromises have been made. At first glance, the monitor is aesthetically pleasing to look at however, a closer look reveals the cost to achieve the goals for this monitor.  So, if you’re in the professional field and looking for a monitor to do your photoshop work, video editing, graphics design, and such, then better steer clear away from this monitor. Its picture quality is average to almost mediocre, the brightness is too weak and you will notice it the first time you turn the monitor on, and the casing quality is pretty poor. On the bright side, if you’re looking for a monitor to play PC titles on with a wide viewing area, fast refresh rate, affordable price, and that can be used on other things as well such as monitoring, then you might want to consider this monitor. It’s worth checking out but you have to consider a lot of things before you decide to buy this monitor.

4 Reasons Why you should Gamble On Online Gaming 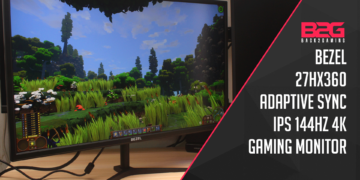 The BEZEL 27HX360 gaming monitor is a 27 inch IPS monitor that features a native resolution of Ultra High Definition...