ASUS today announced availability of a full stack of new Z690 motherboards, along with DDR5 memory module support and PCIe® 5.0 slots for both video cards and storage. The ASUS Z690 platform ― covering ROG Maximus to the ROG Strix, TUF Gaming, ProArt and Prime motherboards ― is built to support all-new 12th Gen Intel® Core™ processors that feature up to 16 cores and 24 threads. ASUS Z690 motherboards are ready to deliver standards-defining performance for Intel CPUs with power delivery and cooling that ranges from tried-and-true to joyously extreme, plus they feature an exclusive new memory overclocking platform called ASUS Enhanced Memory Profile (AEMP). And with features like onboard PCIe® 5.0 M.2 slots, NVME RAID, Thunderbolt™ 4, 10 Gb Ethernet and WiFi 6E on select motherboards, gamers, streamers and creators can shoot to the next level with a range of options for every budget and scenario. 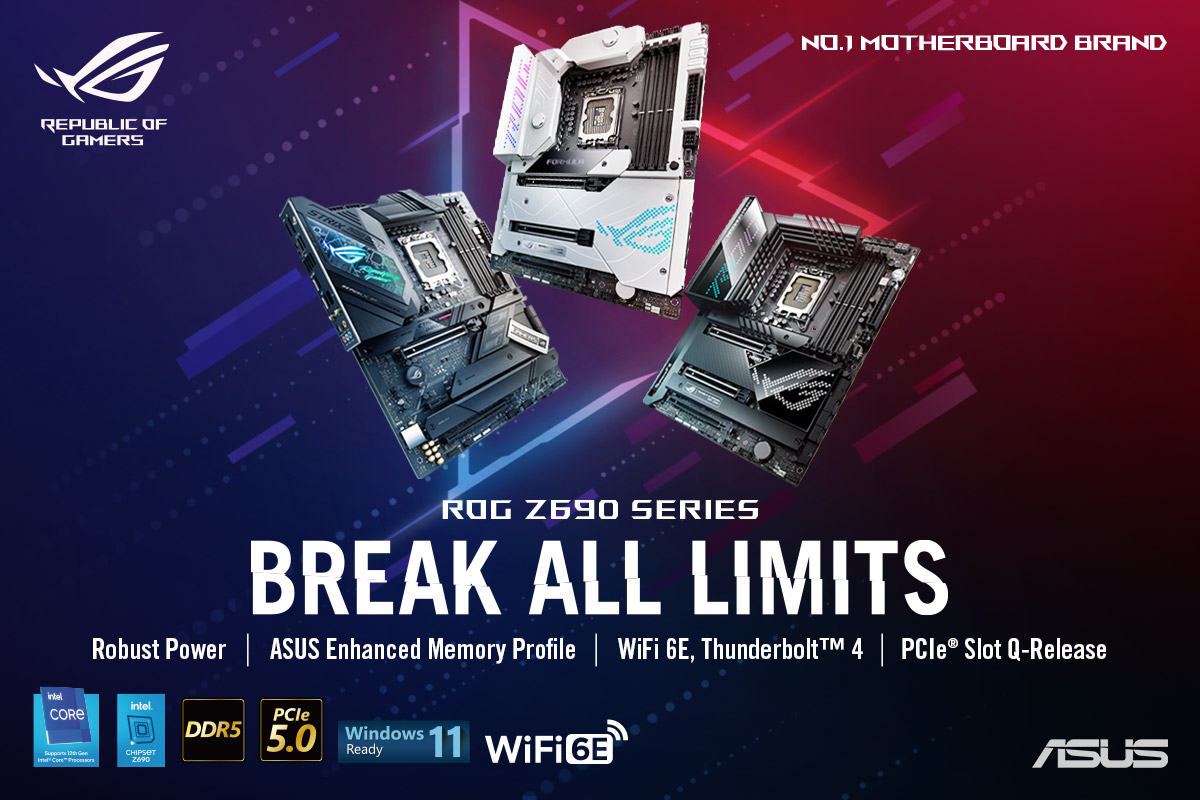 While DDR5 is ordinarily limited to a maximum of 1.1 volts, ASUS has developed a special blend of circuitry and firmware for its Z690 motherboards that bypasses this restriction, freeing users to discover the limits of the new memory technology for themselves. They can either apply manual tweaks or enable AEMP in the BIOS to quickly unlock a performance boost. To make this possible, ASUS has worked diligently with major DDR5 manufacturers around the world including Adata, Corsair, Crucial, Geil, G.SKILL, Kingston, Klevv, and Teamgroup to ensure high compatibility and stability.

To help get users up and running on these new platforms, every ASUS Z690 motherboard also features built-in Windows 11 support, and each one features mounting holes that are compatible with CPU coolers designed for either LGA 1200 or the new LGA 1700 socket. And for purchasers of a Z690 ROG or ProArt motherboard, ASUS offers a trial membership of Adobe Creative Cloud.

In addition, for users who like to venture beyond the nuts and bolts and linger on personalization and aesthetics, ASUS brings all-new visuals like the AniMe Matrix™ display that features mini programmable RGB LEDs to show off personal style with custom lighting designs, unique animations and live audio visualizations, plus striking designs that evoke sci-fi worlds from cyberpunk to aerospace exploration.

For more details about the complete ASUS Z690 lineup, visit the ASUS Z690 landing page. A guide with specifications and images for the entire lineup of ASUS Z690 series motherboards can be found in the Edge Up Buying Guide.

ASUS Z690 motherboards will be available in the Philippines starting November 4, 2021. SRP are as follow.