With Intel’s schedule being leaked earlier, its no surprise we’re seeing as detailed a leak as what we have today with Intel’s entire launch line-up for their 13th-gen Core CPU series emerging. This shows us the complete launch slate from the K-type CPUs all the way to the mainstream offering.

Detailing a couple of things for those unfamiliar, Intel CPUs with a K in their model names indicates an unlocked multiplier and suggests overclocking capabilities. Most of their launch most marketed gaming models will have this distinction. K-series CPUs will also arrive with models with no integrated graphics processor or IGP. These bear the F distinction and is present for both K and non-K CPUs. Last up are the low power models indicated by the T in their model codes.

Raptor Lake Core i9, Core i7 and Core i7

Much of what we see here have already been discussed one way or another and pretty much affirms the existing pre-launch reviews going around. The flagship Core i9-13900K will have a maximum boost clock of 5.8Ghz and its P-cores can go up to 5.4Ghz with the E-cores clocking in a 4.3Ghz. The 13700K sees a 5.4Ghz boost separating itself from the i9 as well as a slimmer arrangement of having only 8 E-cores versus 16 E-cores on the i9. Both i7 and i9 Raptor Lakes will have 8 Raptor Cove P-cores built on Intel’s Intel 7 node and will still utilizes the LGA1700 socket.

All Raptor Lake 13th-gen Intel CPUs will support both DDR4 and DDR5 at frequencies of DDR4-3200 and DDR5-5600 respectively but Raptor Lake i3’s reportedly dialing it back to only support DDR5-4800 on stock configuration.

Intel will also include ECC memory support with Raptor Lake but take note that motherboard support is needed for this just like Alder Lake which required a workstation-class W680 chipset to utilize ECC. 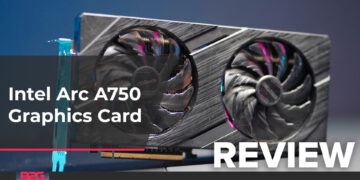 A performance review of the Intel Arc A750 graphics card featuring the ASRock Arc A750 Challenger D OC.

Intel CEO Claims Semiconductors are the New Oil in Geopolitics