With COMPUTEX and AMD’s launch of the new Valhalla desktop platform lining up, brands are drumming up this release to be a big one. AMD is very supportive of its motherboard partners and these brands have delivered to bring motherboard-centric events during COMPUTEX’s busy schedule. AORUS held its own Xtreme Power showcase as well as a VIP suite showroom to showcase its latest motherboards featuring the new X570 chipset as well as their new SSD to support PCIe Gen4. We’ll talk about their motherboards in this article with at least 6 new products entering their motherboard family under the AORUS brand.

AORUS will have the following boards for release: 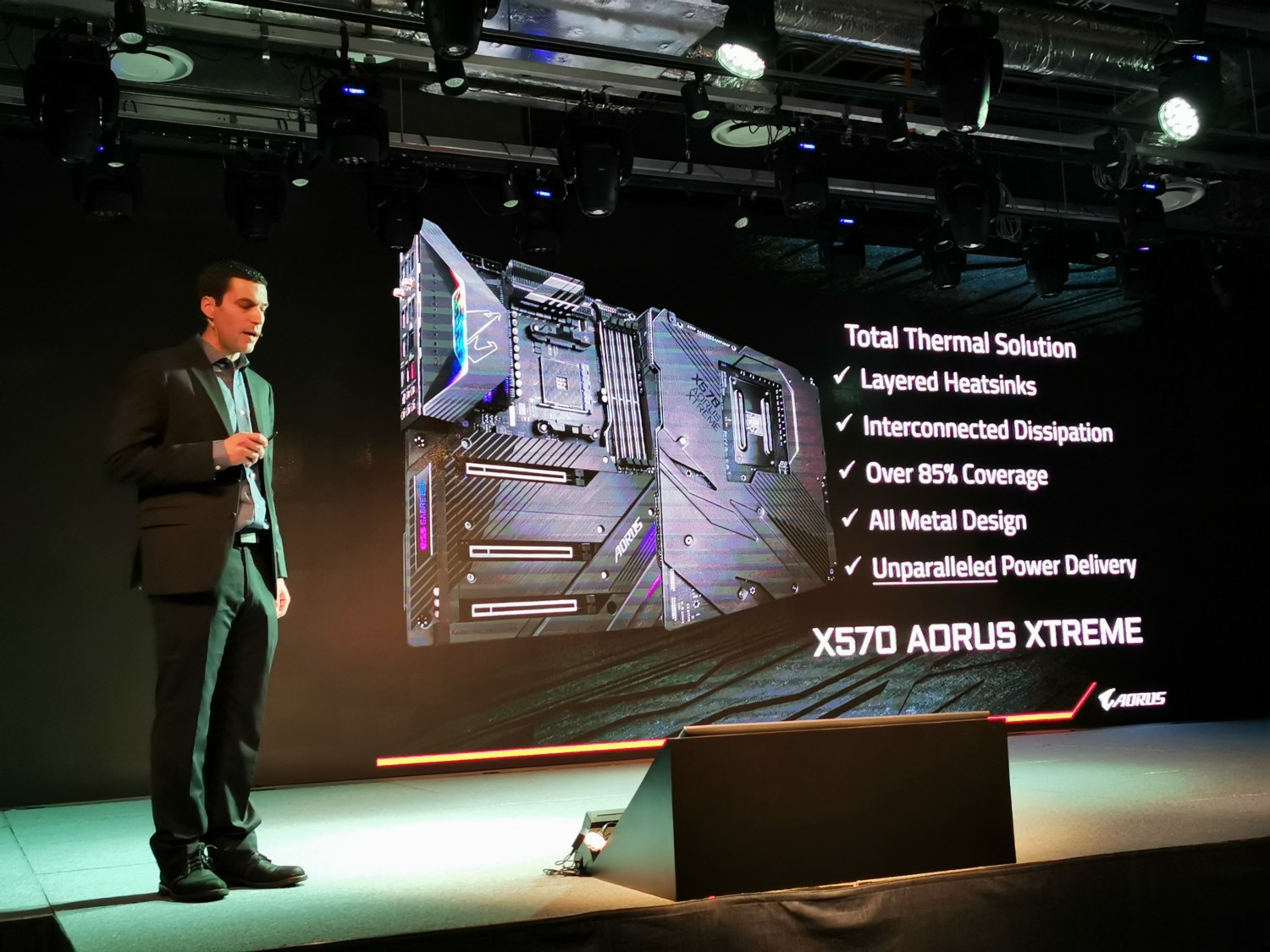 Leading the pack for the AORUS X570 family is the X570 AORUS Xtreme. Featuring a 16-phase VRM controlled by a significant array of VRM components including an Infineon VRM controller, PowIRstages and high-current chokes.

The motherboard has two 8-pin EPS and the entire motherboard shroud and backplate serve as a heatsink for its power draw. Most of AORUS new motherboards especially the high-end ones will be wired on a direct VRM arrangement meaning no doublers are in place. A chunky heatsink sits on of the VRM with a passive PCH heatsink connected to it with M.2 heatsinks filling in the gaps. A pre-installed I/O shield is still present as with most motherboards in this lineup. The X570 AORUS Xtreme includes an WIFI-6 antenna as well as a 10GbE LAN via an Aquantia controller with a secondary Gigabit LAN provided via Intel i211. Audio solution is complimented by a ESS Sabre DAC. 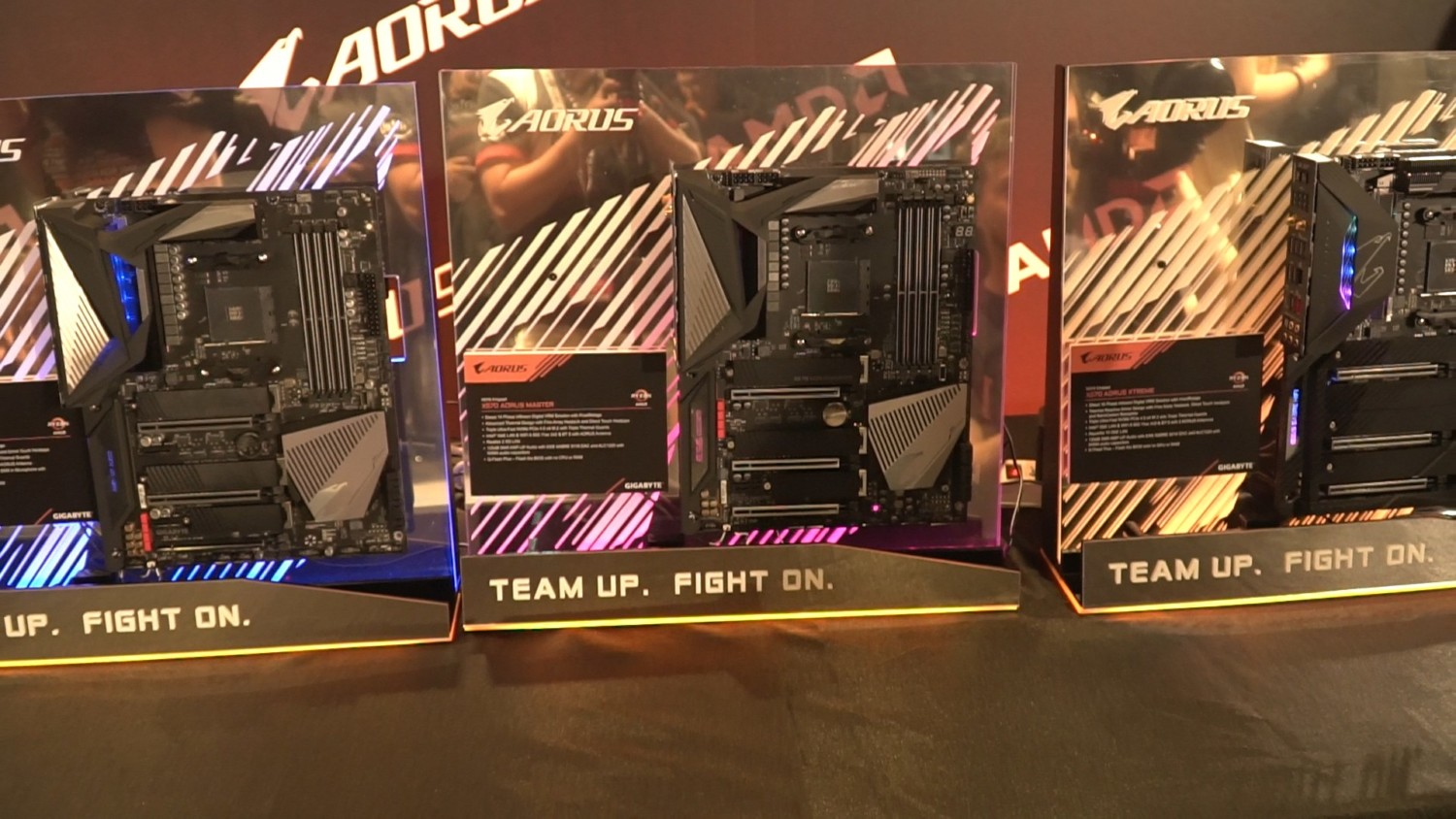 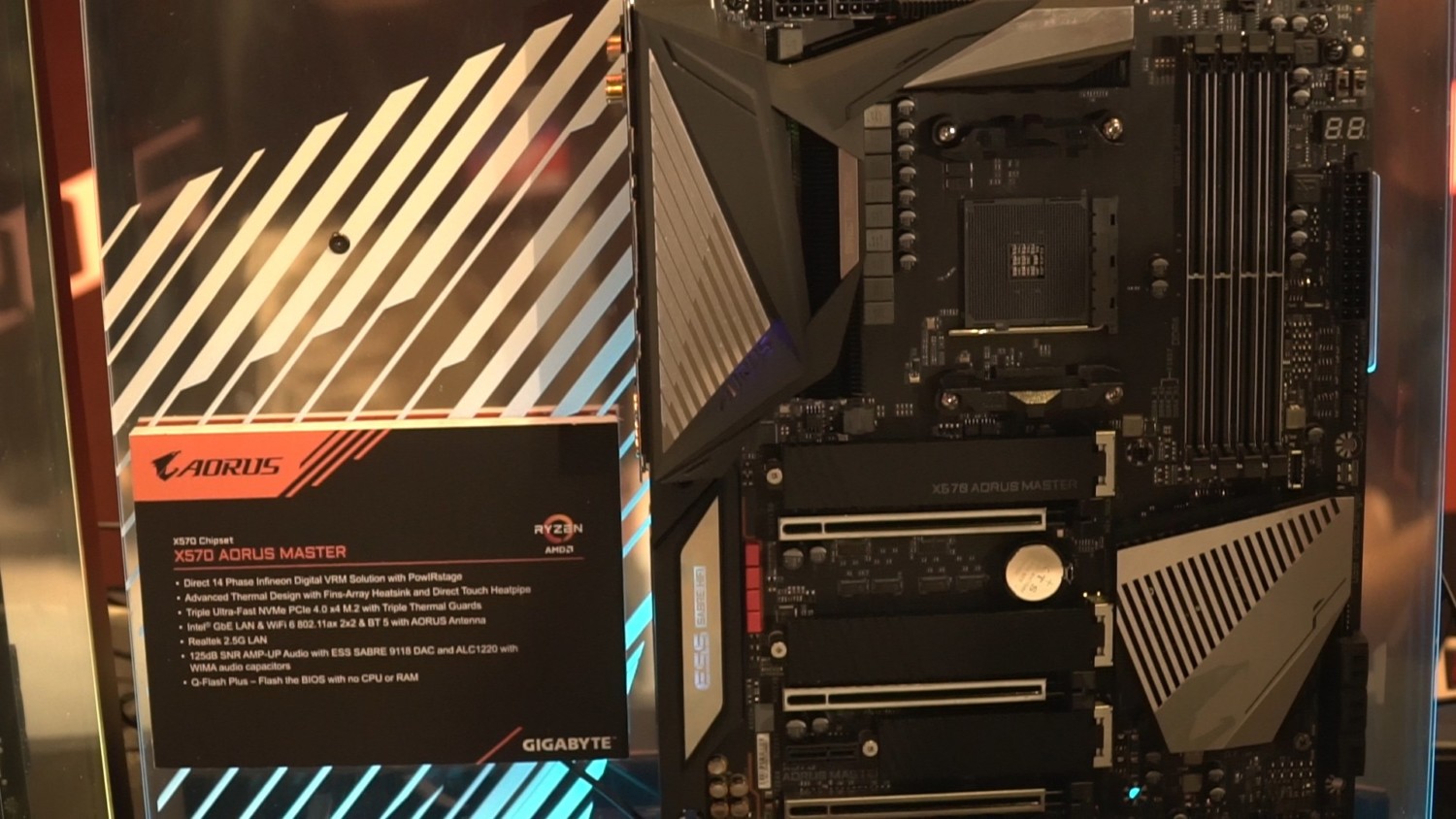 AORUS follows with the X570 AORUS Master in its stack. A 14-phase VRM powered off two 8-pin EPS connectors wired with similar specs as the Xtreme. The board features multiple PCIe Gen4 with three M.2 also running off a PCIe Gen 4 x4 connection. A slightly reduced (from the Xtreme) 125 dBA SNR ESS Sabre DAC is wired to the audio solution with user replaceable OP-AMPs a bonus for enthusiasts. The board features onboard WIFI 6, Bluetooth 5.0 as well as 2.5Gb LAN via a Realtek controller with another Gigabit LAN from an Intel i211 serving secondary LAN duties. 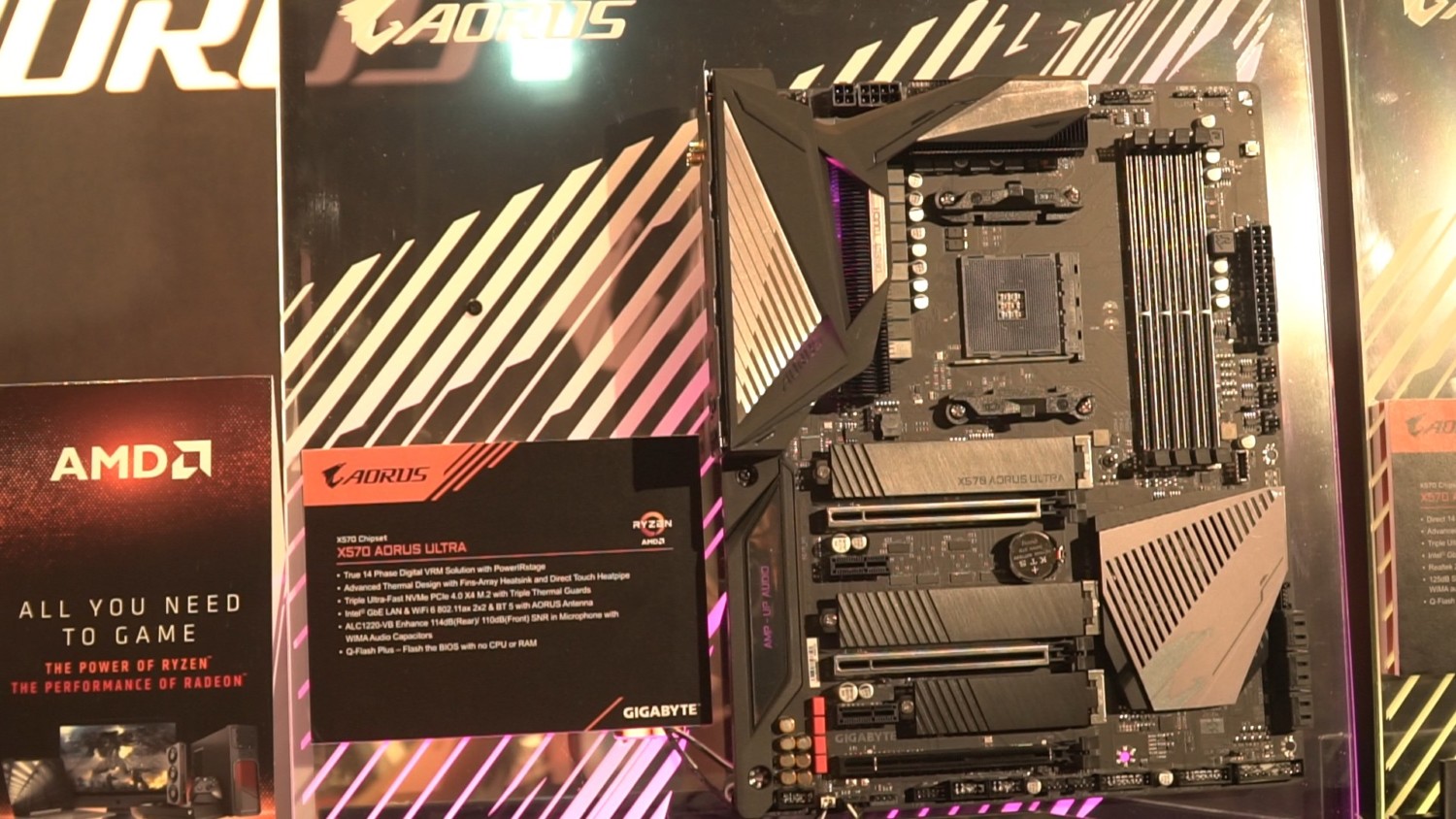 The GIGABYTE AORUS X570 Ultra share a similar PCB with the X570 AORUS PRO but with a bit of extras as well as a slightly different look. Specs-wise, the motherboard sports a 14-phase VRM with onboard WIFI 6 + Bluetooth 5 with fin-array heatsink over the VRMs. 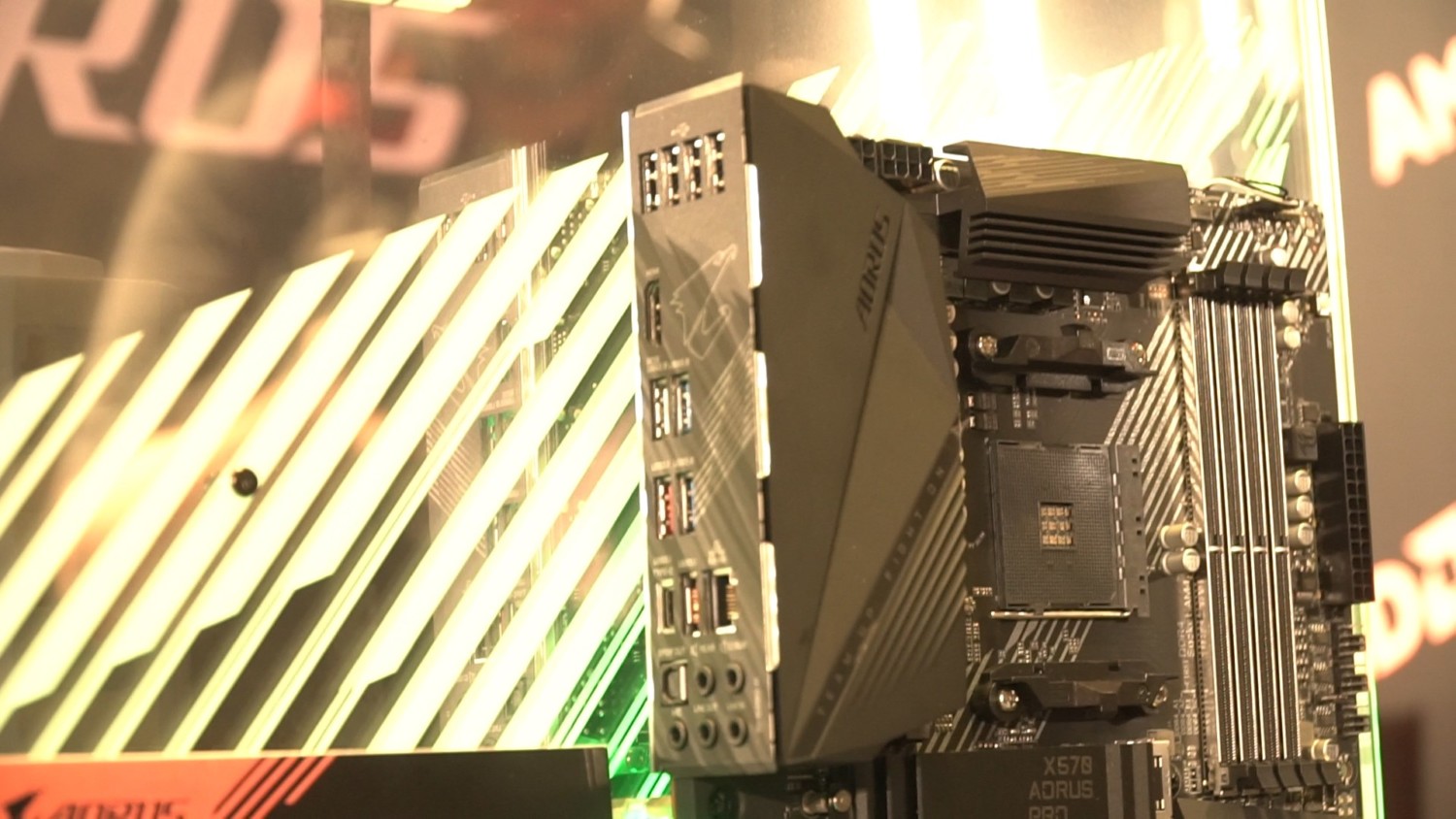 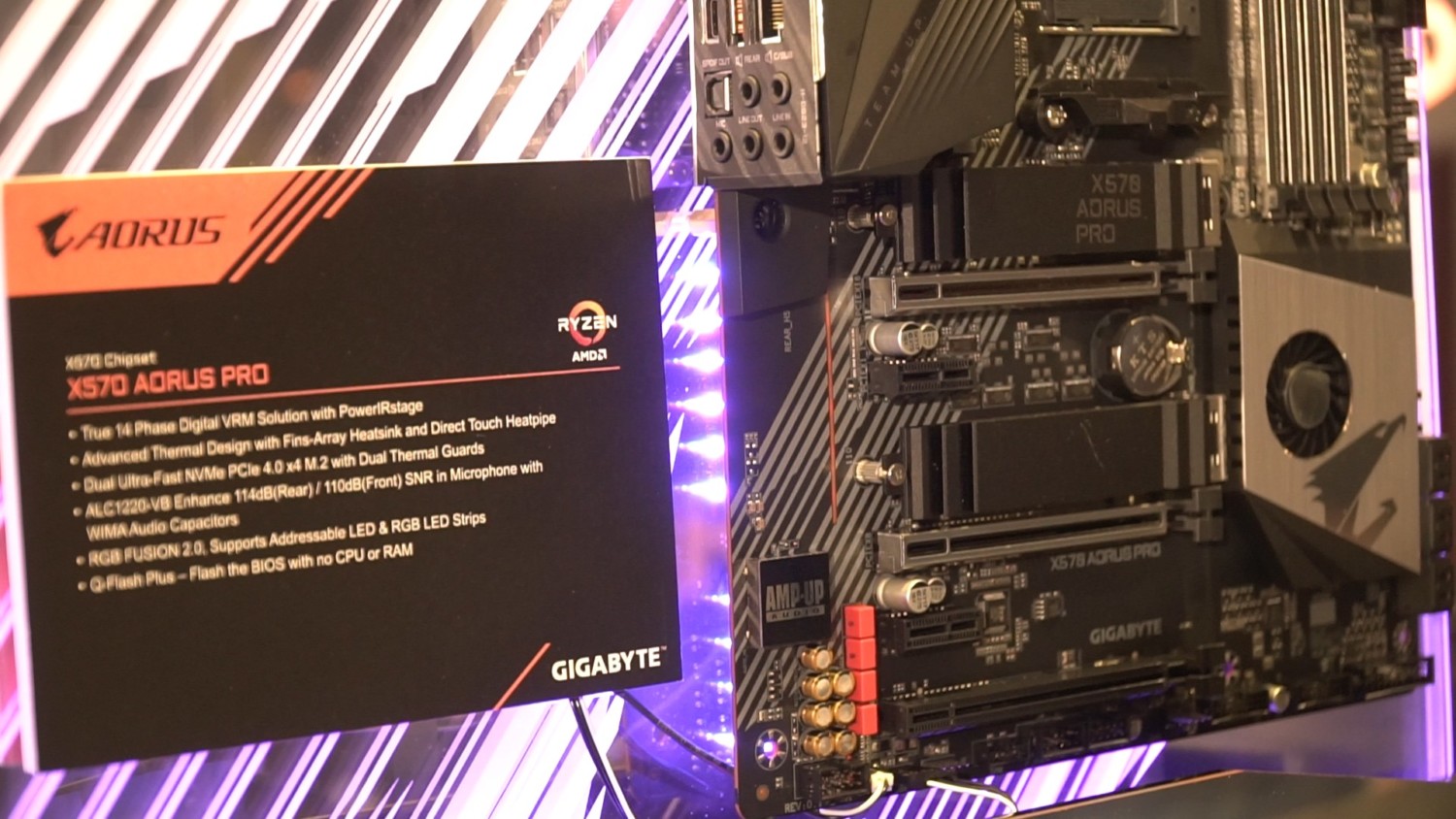 Similar to the previous motherboard, the X570 AORUS Pro sports a 14-phase VRM with a lighter heatsink array cooling the secondary CPU VRMs. The board still uses PowIRstage mosfets and the main CPU VRM is cooled by a aluminum fin array. 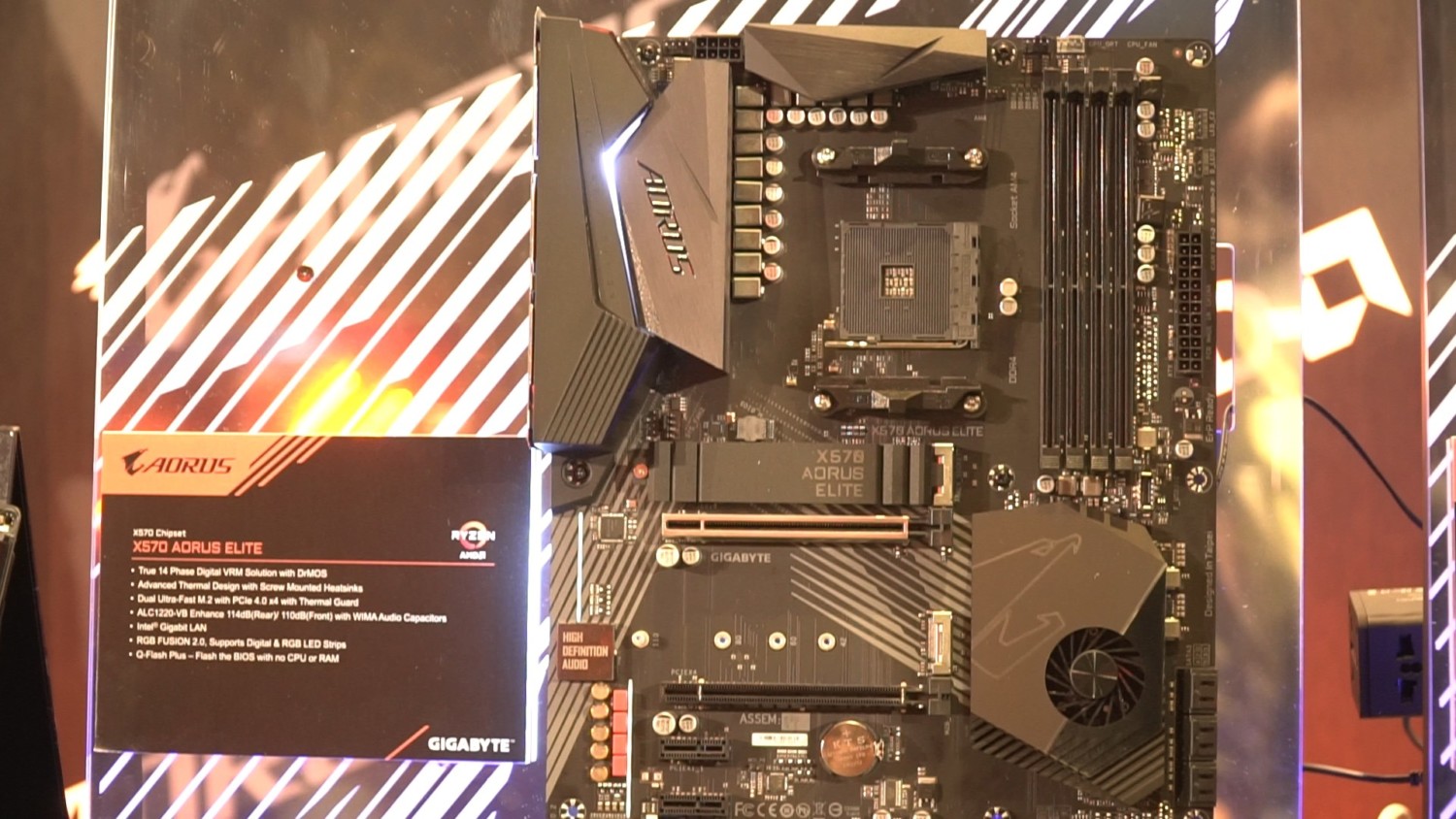 The entry level of the pack is the X570 AORUS Elite. It features the same capable 14-phase VRM. Less M.2 heatsink covers on this board but still you get PCI Express Gen4. 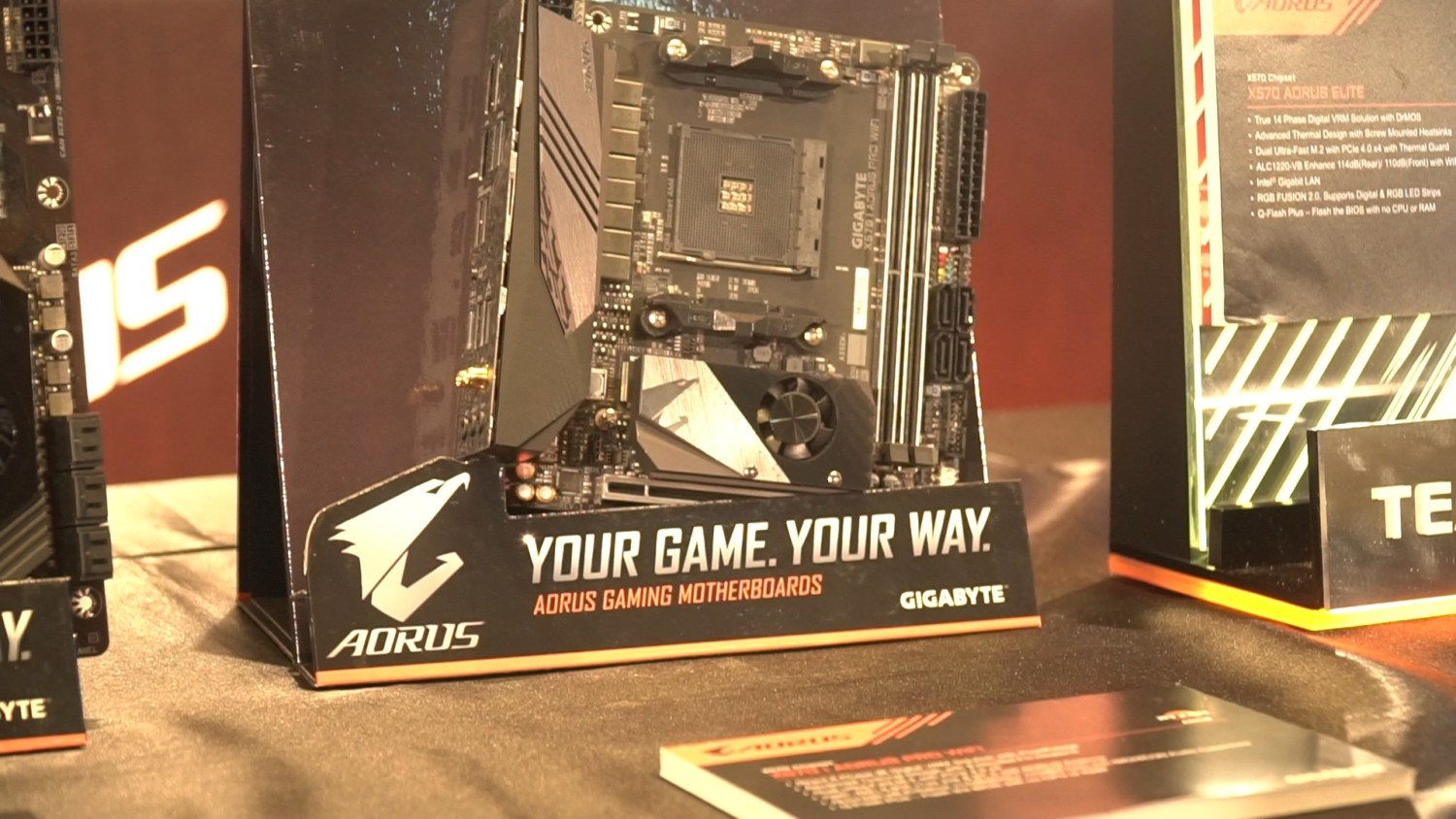 Perhaps the second most talked about board in the AORUS lineup for X570, the AORUS X570 I PRO WIFI (note the I in the name) features a hefty 8-phase VRM featuring PowIRstages components with a dense heatsink on top to cool the VRM. A hefty heatsink with a 30cm fan is also present on top of the PCIe slot. The board features a single PCIe Gen4 x16 with two M.2 slots capable of both PCIe Gen4 x4 and SATA options. Networking includes WIFI 6  as well as Bluetooth 5 are built-in onboard. Audio is handled via a Realtek ALC1220VB Enhance codec. 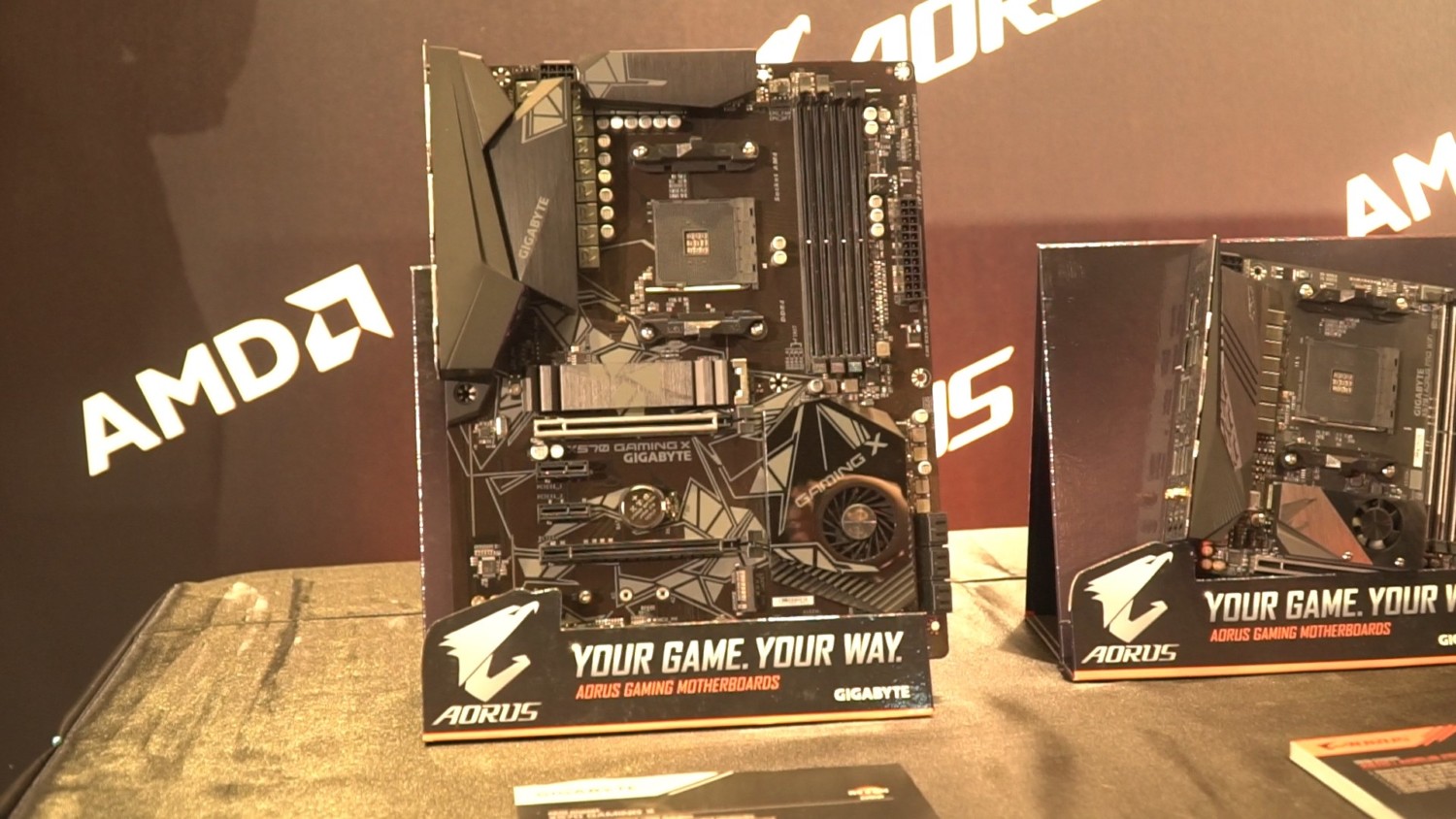 The GIGABYTE X570 GAMING X was also showcased and features a 12-phase VRM. The board is a stripped down budget option for those looking to run off with the bare essentials on the X570 chipset.