Game Benchmark Methodology and Why it Matters

We have an updated article covering our game benchmarking here.

Game benchmarks are regarded by gamers and enthusiasts as a guide in choosing a new CPU and a new GPU for a gaming PC. Review sites do benchmarks to analyze how different combinations of CPU and GPU affect gaming performance or to know how a newly released game performs on a variety of hardware. The frame rate is used to measure gaming performance and it is simply the number of frames per second. Higher frame rate usually means better performance. So, it’s just a matter of looking at which has a higher frame rate, right? Yes, but sometimes you would see contrasting benchmark results of a game from different review sites even if they all used almost the same PC components. Obviously, the game settings used greatly affects the results but a lot of popular review sites don’t tell their readers what part of the game they benchmarked. Benchmarking the whole game is ideal but it would be very time-consuming because games like  usually take 8 – 12 hours to finish. A section of the game to be benchmarked needs to be chosen and this is the cause of the contrasting benchmark results. Later in the article, we would show you how the benchmark results are influenced by the section of the game that was benchmarked.

The PC we used for testing is shown below.

We configured Hyper Threading and the number of active CPU cores of Core i7 4790K thru the BIOS to simulate different CPU configurations. Disabling 2 CPU cores of Core i7 simulates Core i3 while disabling Hyper Threading of Core i7 simulates Core i5. This is not a 100% accurate simulation because Core i3 and Core i5 have smaller L3 cache compared to Core i7. But for the purpose of this article, CPU simulation is a valid approach. We will investigate the gaming performance difference between a simulated CPU and a real CPU in a separate article.

For the benchmarks, Crysis 3, The Witcher 3, and Grand Theft Auto V were tested. Three games may seem very limited compared to what we and other review sites usually do, but we believe our choice of games is a good representative of the games currently being played by the gaming community.

Frame rates and frame times of a 60-second game play were recorded using FRAPS. The test results are the average of 3 benchmark runs and 2 benchmark sequences will be used for each game.

The game settings used for each game are shown below:

Starting in this article, we would now be showing what section of the games we benchmark. Some review sites only describe the part of the game they benchmarked. Here at Back2Gaming, we believe it is better to show videos of the benchmark sequence so it would be easier for our readers to replicate our benchmarks for verification purposes.

Crysis 3 – Welcome to the Jungle 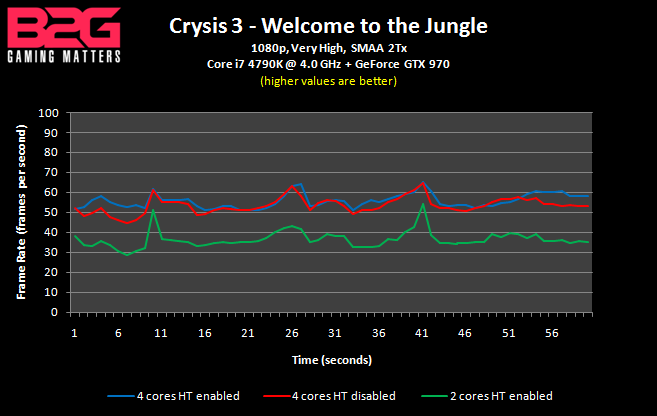 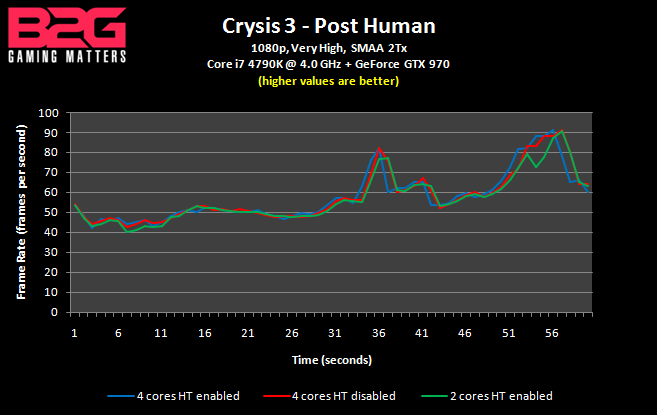 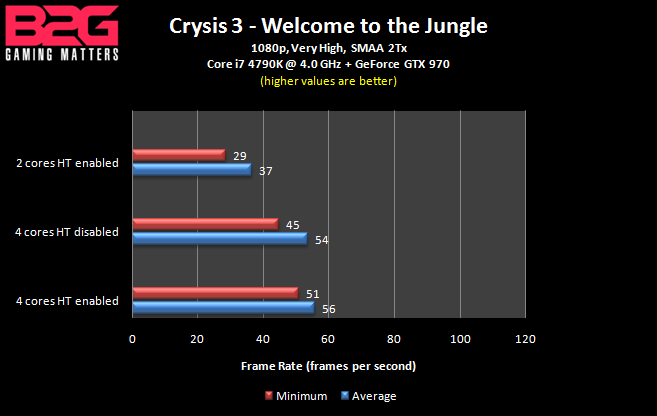 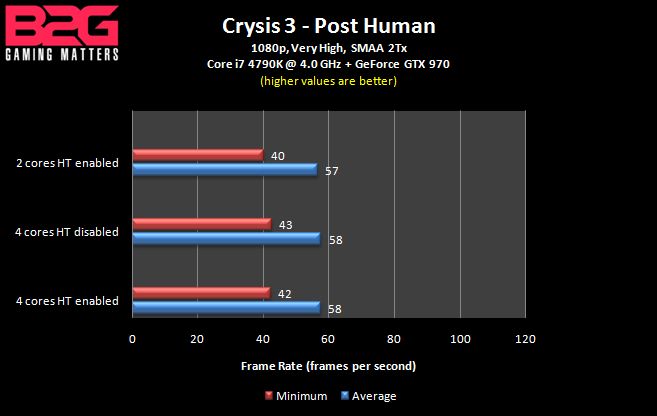 Nothing much to say in The Witcher 3. All CPU configurations delievered almost the same performance in the 2 sections that were tested. 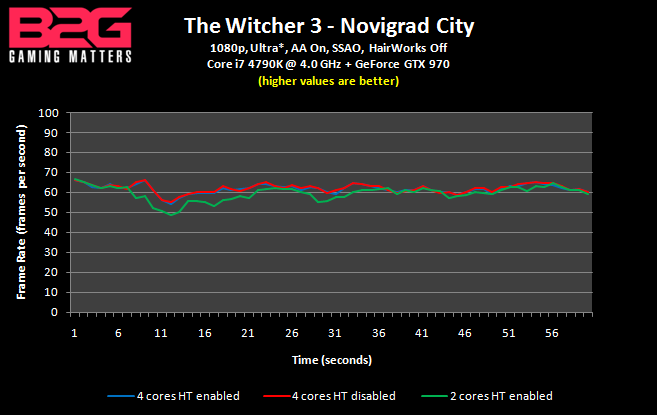 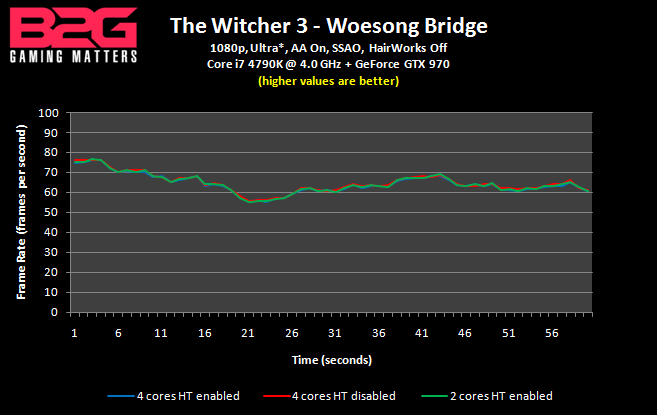 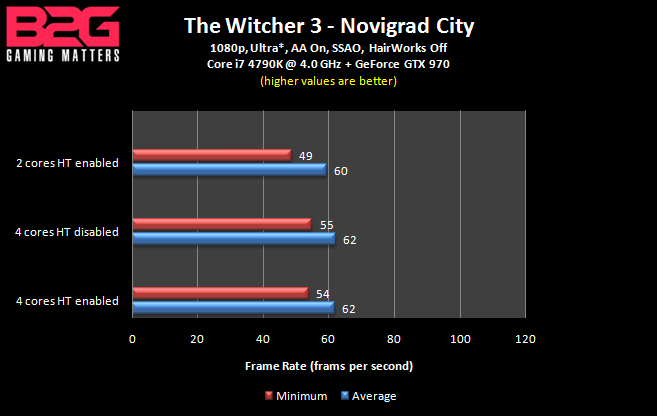 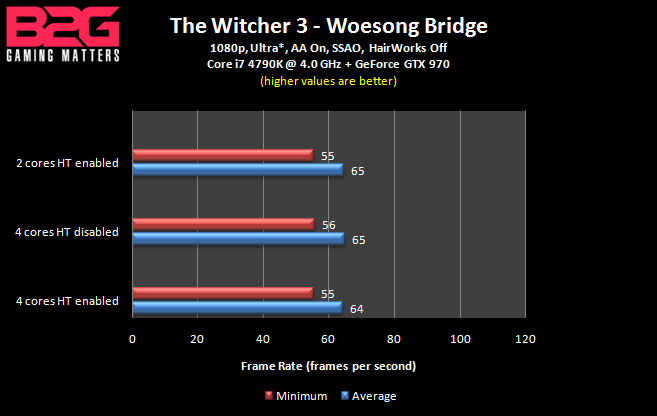 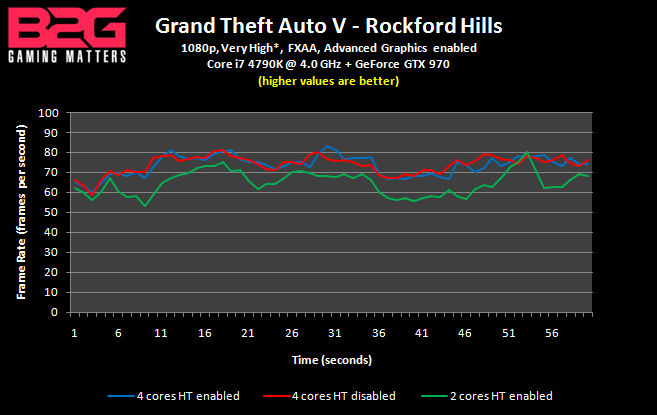 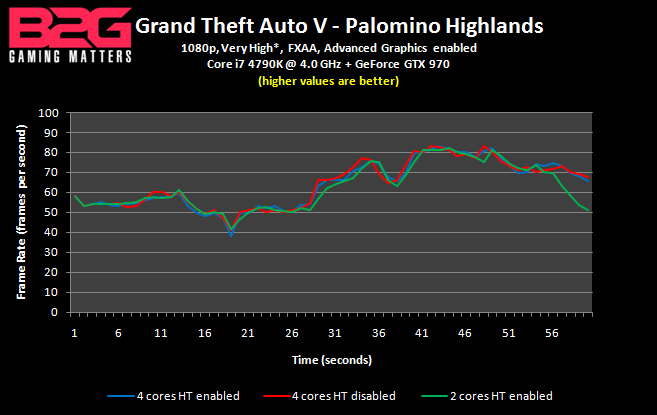 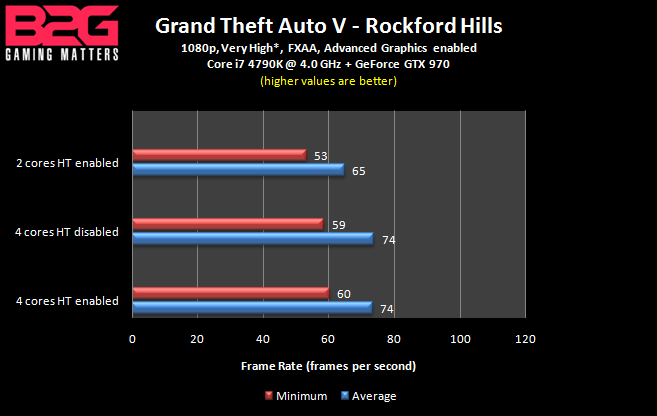 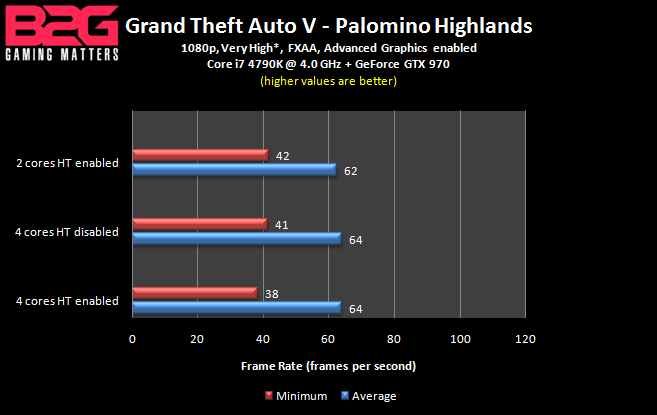 NOTE: Before you proceed, we strongly recommend that you read Tech Report’s article on frame time benchmarking. In case you want to skip reading that article, here is a quick lesson on how to read the frame time results. 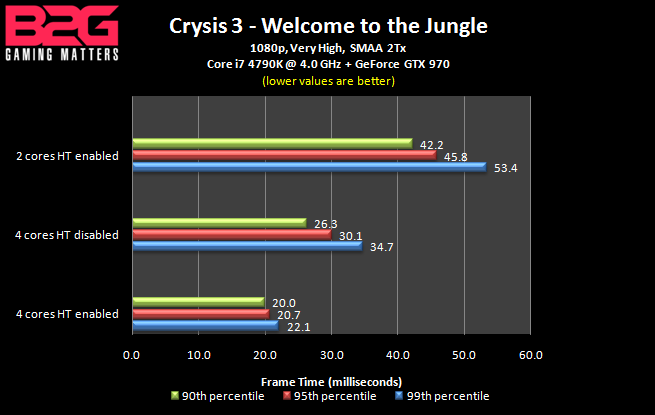 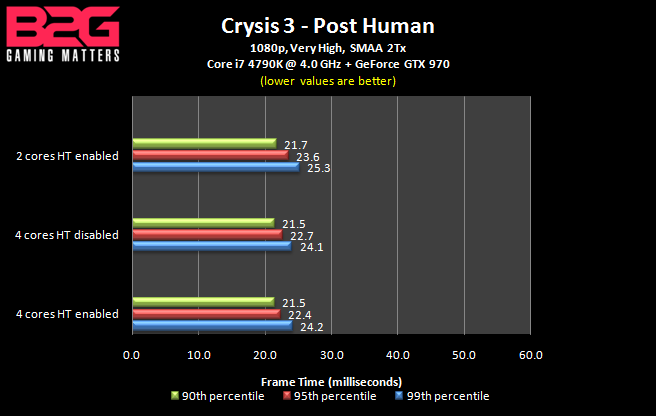 While not as demanding on the CPU like Crysis 3, we can see that the CPU also matters in The Witcher 3. Disabling 2 CPU cores of Core i7 4790K increased the 99th percentile frame time by 32% in Novigrad City but the game is playable on all CPU configurations. 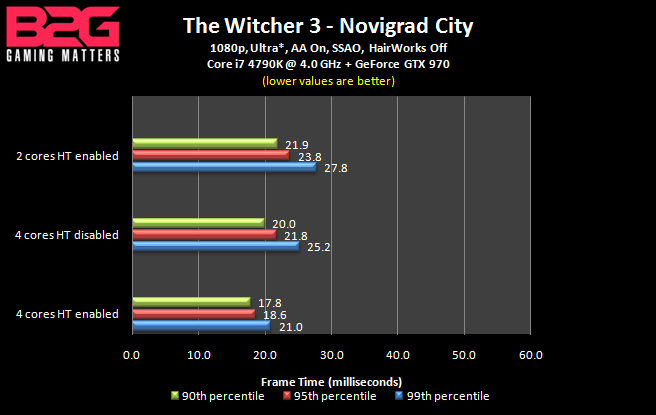 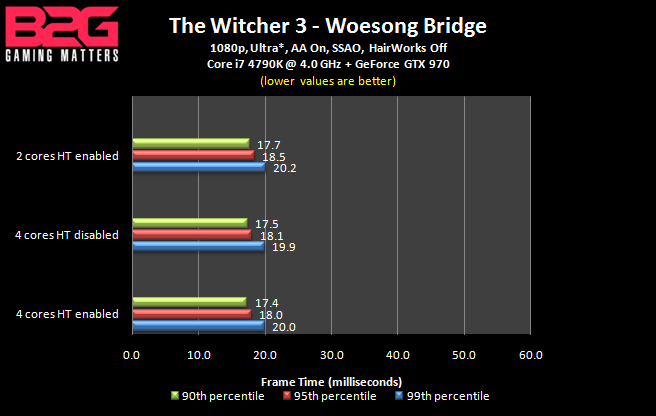 All CPU configurations delivered a smooth gaming experience in the 2 sections of Grand Theft Auto V that were tested. However, it should be noted that in Rockford Hills,  the GPU usage drops to around 80% when 2 CPU cores of Core i7 4790K are disabled. Comparing the 99th percentile frame times of the 2 levels, Palomino Highlands is 36% higher than Rockford Hills when Core i7 4790K is in the default configuration. It shows that the Palomino Highlands area is more demanding on the GPU. 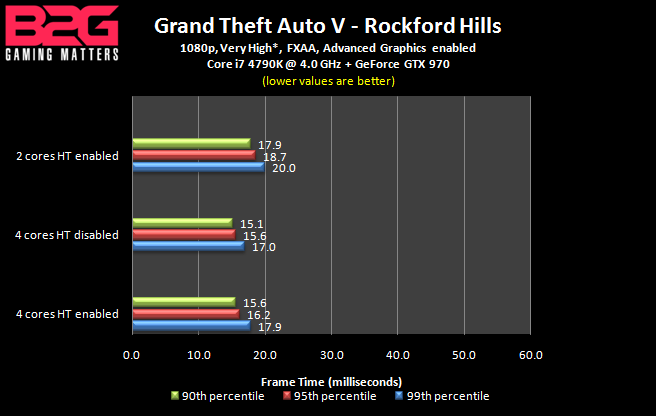 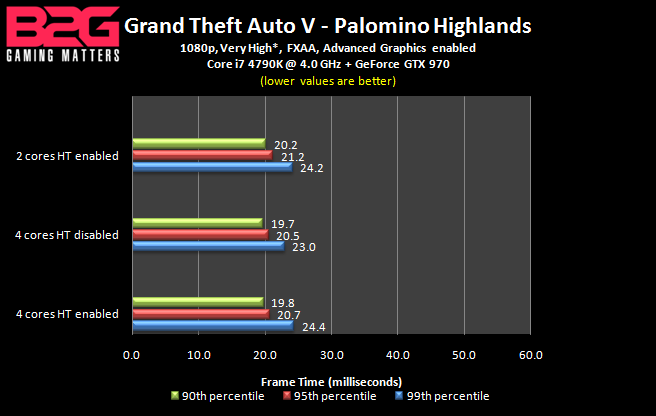 With the frame rates and the frame times of the games we tested, we hope that you now understand how important the test methodology is. It’s possible to get largely varying results depending on the section of the game that was benchmarked. There are games that have a section which are very demanding on the CPU and others have a section which will put a heavy load on the GPU. So, what should a review site use for their benchmarks? That depends. If GPU’s are being reviewed, of course, a benchmark sequence that puts the heaviest load on the GPU should be used. In testing how a game’s performance is affected by CPU performance, a benchmark sequence that puts the heaviest load on the CPU should be used. We believe that it is better to show worst-case real-world performance because it’s non-sense to benchmark a section of the game that puts a light load on your system. If you base your purchase decision on a benchmark that puts a light load, you would run into performance problems in the more demanding sections of a game.

The test results we’ve shown today are based only a GeForce GTX 970. In our upcoming article, we will apply our new game benchmark methodology using Intel Skylake CPU’s (LGA 1151) partnered with various GPU’s from different price brackets. Newer games like Rise of the Tomb Raider will also be added for the benchmarks.

BossMac’s Notes: As mentioned earlier, this isn’t conclusive nor definitive in any respect but serves as a guide to show everyone the methodology and concept behind our benchmarking techniques. While we will still be serving up frame-rate based reviews for our general audience, our more technical audience will appreciate the added insight into the benchmarking process and we are looking into including a more comprehensive result graph in the foreseeable future.

For now, let’s get back to gaming.