Happy New Year everyone! Its 2022 and another launch calendar is upon us and with CES 2022 bringing the heat in term of what to expect soon in hardware, we still gotta have some games to enjoy all that technology in. Whether you’re on a laptop or desktop, NVIDIA RTX is still the most played on GPU in the world and RTX technology is now arriving for xx50 class which should entire a whole new generation of gamers to upgrade their PCs and enjoy the modern era of gaming.

NVIDIA now has 150 games supporting RTX technology as well as applications accelerated by RTX, highlighting the power of RTX technology none more so than Deep-Learning Super Sample (DLSS) and GPU-accelerated ray tracing. Coinciding with hardware announces are a couple of games to whet gamers’ appetites for the year to come. Read on to find out more!

I’m very biased towards the Rainbow Six franchise and while modern games have ventured far from what Tom Clancy may have envisioned the series heading onto but as a Rainbow Six Siege player from beta days, dropping it on Year 1 and then picking it back again just as when Year 2 started, you’d know how agile the game has been changing. With Rainbow Six Siege picking up a large esports following, performance was key and around Year 5 it introduced NVIDIA DLSS and NVIDIA Reflex support which added a whole new dimension in both visual fidelity and responsiveness. Rainbow Six Extraction, a PVE standalone spin-off of Siege sees members of Team Rainbow tackling parasitic alien goo has invaded Earth and instead of Spider-man, its up to a specialized response team from our friends at Rainbow: the Rainbow Exogenous Analysis & Containment Team to put this threat down.

Play with friends or alone in this objective-based FPS shooter marrying the best of classic Siege along with new mechanics, based from the Rainbow Six Siege Outbreak event. With updated graphics assets an new character models, Ubisoft Montreal is set to impress with a rich environment. Enjoy increased performance with GPUs supporting DLSS as well as improved system latency to progress your characters quickly and enter the Singularity as well as complete the Maelstrom Protocol.

If you haven’t played Siege or want to but Lone Wolf or online training just isn’t a fun start, Rainbow Six Extraction is a nice way to meet Siege players who are taking a break from all the sweat as well as new folks coming into the game like you. For veterans, it’s a nice washover for those that want a timeout from the wall-reinforcing, wall-rappeling, window-smashing action of Siege. 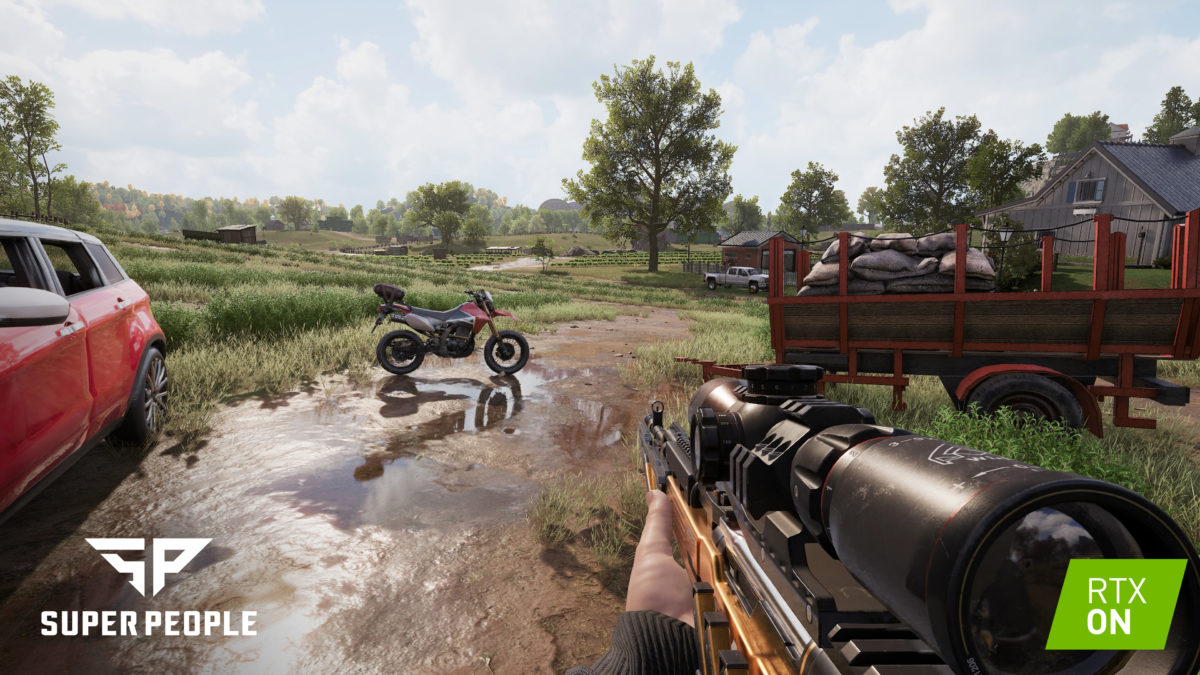 I’d be honest I checked out this game on launch because of the pretty Korean in-game models but 1-game in and you know Super People has a little twist to it that makes its own Battle Royale. Launching later this year, Super People will be a traditional battle royale which will see a ton of players looting and traversing maps to see who’s who but they’re not just shooting each other. A new game mechanic akin to Call of Duty’s killstreak bonus rewards players performance and allows them access to devastating super skills (not a Shin Shoryuken-kinda super move) but rather ultra-lethal, structure-clearing devastation-kinda supers. The game plays relatively fast as well and the game world is pleasantly bright and detailed.

Escape from Tarkov Gets DLSS

Another upcoming full-release is Escape from Tarkov. Currently on beta, the game is a hit with fans of hardcore FPS. Escape from Tarkov marries a FPS game that blends survival and RPG elements into a challenging-yet-rewarding gaming experience.

The game will receive DLSS support soon which should please RTX owners that need some extra push in FPS horsepower.

Coming this year, Dying Light 2 is the much-awaited sequel to the original 2015 zombie game Dying Light, establishing itself as a standout zombie game thanks to fluid in-game movement mechanics and an emphases on a highly-traversable, detailed world, Dying Light 2 will take players to a new location: The City.

Dying Light 2 will support NVIDIA DLSS as well as ray-traced global illumination, reflections and shadows. Check out the trailer above too see how far the game has evolved how NVIDIA RTX helps push the performance and graphical level further.

Not a lot to say here: its Hitman and its getting DLSS. If you’ve been living under a rock for the past 10 years, Hitman is only the most exciting stealth game ever since Sam Fisher and Solid Snake hung up their scopes and bandana.

Agent 47 is a professional and you should be, too. Fulfill contracts and execute hits with utmost precision in this game. If your system needs a little FPS boost, NVIDIA’s DLSS can give that little injection of FPS to make you time that next move better to get you performing strategic, well-thought out executions or improv your way to the next kill. Your choice, Agent 47.

Arriving later in 2022, Voidtrain and crowdfunded darling Ratten Reich will both see NVIDIA DLSS and ray-tracing. While Voidtrain is set in a fantasy world, Ratten Reich’s beta will dip players into another. Both games will be set in a unique backdrop wherein in Voidtrain, players will need to level up their trains and equip them to set forth  on the danger of the void. Get sucked into the charms of Voidtrain’s detailed world, touched-up by realistic ray-traced reflections and global illumination.

Those who have backed Ratten Reich in Kickstarter will have beta access to the game and help influence the direction of development. As it stands, the game will also dip into a world with NVIDIA-backed ray-tracing as you command rats, roaches in more in a bid for global domination… again, with lizards, roaches and rats

Both games will also feature DLSS and speaking of which, here are more titles getting DLSS: The Anacrusis, Phantasy Star Online 2 and Midnight Ghost Hunt will be receiving DLSS, with the latter also getting reflex.

I can’t even remember the first time I picked up the original Phantasy Star but I can tell you it was a very, long time ago. The is an RPG legend and Phantasy Star Online 2 New Genesis cements it further as one of the most enduring titles in the RPG world. The game will receive DLSS and should improve the overall experience even further.

Dialing back to a bit of hardware news, checkout more NVIDIA announcements from Vegas from CES 2022 and catch-up on what you’ve missed. Hint: laptop gamers will like what they see. As well as the new GTX 1050 Ti master race with these announcements.