There's a lot more in Coslandia, but I'm going to be on the lookout for these...

The upcoming Coslandia 2019 is poised to take its place among the more notable Pop Culture events in the convention calendar. For one, the whole event is undeniably a Japanese Pop-Culture event organized by a Japanese company in partnership with other Japanese entities like the Embassy of Japan in the Philippines, Japan Foundation, World Cosplay Summit Philippines, and Pop Culture Hiroshima Philippines. That is the overriding theme of the event and the activities and guests are all aimed at promoting Japanese pop-culture in the Philippines.

Now, you may be thinking: “what does this event have to offer that the others don’t?” Well you are right to think about that because we have an almost endless array of pop-culture events already in firm foundation. But Coslandia 2019 aims to offer its own spin on what a “Japanese pop-culture event” is all about. Here are five things to watch out for in Coslandia 2019.

1. Cosplay
– Cosplay Mania might be the premier cosplay event in the country, but Coslandia’s events are no slouch either. Partnering with Pop Culture Hiroshima and World Cosplay Summit Philippines, there is actually a lot in store for competitive or hobby cosplayers alike.

World Cosplay Summit Philippines will bring their cosplay ambassadors as well as their own idol group Pastel∞Mix to the event. They will stage a solo cosplay competition with the themes “Armor and Cloth” and “Hero and Heroine”.

2. HADO
– In all my years as a gamer, I’ve never taken VR seriously. For one, though the technology has improved by leaps and bounds, it is in no way stable and reliable enough for competitive play. HADO, it seems, is trying to prove me wrong. Labeled as the first “augmented reality sport” that allows players to run freely within player versus player, 2v2, or 3v3 arena battles. HADO lets you play like a virtual Dragon Ball session.

Now, there’s a lot of factors at play here like how fast will the equipment detect your commands. Lag is a real concern in e-sports after all. All the websites I’ve checked into say that in addition to the head-mounted display (which makes participants look like X-Man Cyclops), there is a motion sensor worn on the wrist. It would be interesting to see if the motion input can be read in real-time.

3. Idols
– When the organizer is the same company running idol group MNL48, you know idols will figure a lot into the program. And there’s a host of them: Gracorex, Hirotoshi Maeda, Samero, Amatsusora, 1-Girls, Fairytale (who performed in MNL48’s Living the Dream concert), Tomoka, Davao’s very own Pastel∞Mix, and…..drum roll please: Ebisu Muscats! 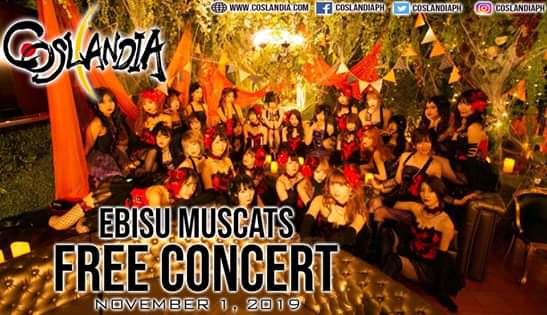 Ebisu Muscats is an idol group formed out by gravure and JAV talents. Like most notable idol groups, they also have a rotating line-up owing to the nature of their “day jobs”. However, they’ve had pleasant success and have been going on for years, first established in 2008. This current incarnation was formed in September 2015. 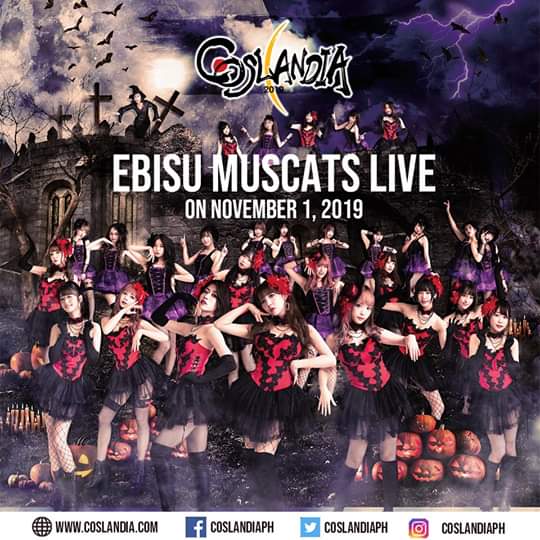 I am also rooting for Davao’s very own Pastel∞Mix: the only local idol group in the line-up not named MNL48. I’ve always loved their performances ever since last year’s Manila Idol Matsuri, and I am sure they will not disappoint this year.

4. Anime Movies
– I haven’t really been updating myself with anime movies as of late. I still watch the occasional series or OVAs, but the last anime movie I watched was Mobile Suit Gundam NT and only because it is the epilogue to the amazing Gundam Unicorn arc.

Coslandia has not one, not two, but four anime films that will be screened during the event. Movies “Your Name“, “A Silent Voice“, “Your Lie in April” will be screened culminating in Mazinger Z: Infinity on the third and final day.

5. MNL48
– The J-pop idol group MNL48 will have a huge presence in Coslandia 2019. Not just because their parent company is organizing the event, but because of the number of activities they have in store for their fans. They have activities on all three days, promoting various stuff, having a fashion show, and a mini-concert on the second day.

The girls are slated to promote their new app-game “Janken Senbatsu“. Previously showcased in Tokyo Game Show 2019, Janken Senbatsu follows a long line of AKB48 app games made available at one time or another. Details about the game are scarce – except for those fans who actually went to Tokyo Game Show for them. All I know is that it is a Card Game.

MNL48 will also promote the movie “Seikimatsu Blue” which stars Abby in the lead role, with fellow members Brei, Coleen and Kay in supporting roles. Not only MNL48, but the author, director, and the cast will also help in promoting the movie, the first to include any active MNL48 member. Manga magazines of Sekimatsu Blue will be available during the event for PhP 1,000.00.

Finally, there’s the performances by the group. MNL48’s fifth single. “High Tension” is the theme song of Coslandia 2019 and will be unveiled during Day 2. After which, prepare your lightsticks for the MNL48 concert. MNL48’s live performances have improved by leaps and bounds with each single, and as a fan, I can’t wait to see them on the stage again.

All these things and more are coming to you on Coslandia 2019. Here’s to a very successful event!